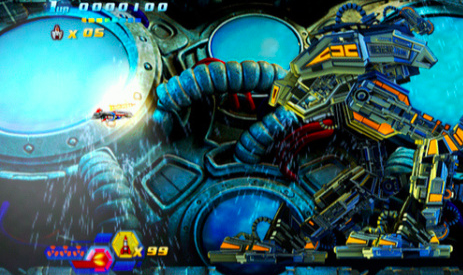 Some day soon I will defeat you, giant mech. Some day...

It was announced on RedSpotGames’s website today that Sturmwind is going to be delayed due to an unexpeted event:

Production complications: Sturmwind is about to be delayed

In spite of best planing, the release of Sturmwind has to be postponed: Our long-term CD-ROM manufacturer surprisingly had to declare bankruptcy after 19 years in business. From 40 employees only a few remained. Therefore this resulted in the situation that the scheduled delivery date for Sturmwind could not be met in the end.

The only possibility has been to relocate the production – to avoid further delays of the bankrupt facility. Nevertheless items like the spaceship models have been completely manufactured already. Our new partner is one of the largest videogame CD / DVD press plants in Europe with over 50 years of experience in medium production. In the meanwhile we already placed our production order for Sturmwind.

The release date is set to TBA (“to be announced”) consequently.

Details are currently clarified between redspotgames, Duranik and the new facility. Also we are arranging material for another announcement with more exact information within December, which will be after Christmas however. All orders in the redspotgames online shop will remain valid.

Well atleast they were honest about the occurrence, and also reassuring at the same time.  So, it looks like Sturmwind will not be out in time for Christmas, but hopefully early into 2012.  What do you think about the delay, folks?  I for one am disappointed, but excited that the game has not been cancelled from existence.

[Source: The Dreamcast Junkyard via RedSpotGames]