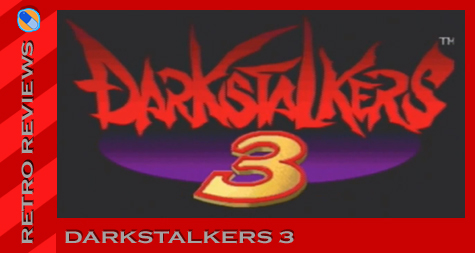 Did you know that Darkstalkers 3 is available for download on the Playstation Network? Okay, you probably did. We missed this re-release but with all the rumors about a possible Darkstalkers 4 floating around, it’s time to play catch up.

Reviewer Perspective: “Scorned Lover” – A cranky former Capcom devotee who bought a 3DS for Megaman Legends 3… Boy has this been a bad year for me and Capcom.

When I talk about the third Darkstalkers game, I have a different name for it. Most Sega Addicts do. We call it “Vampire Savior”. Even though Darkstalkers 3 made it to the US Arcade scene, it skipped the US when it came time to be released on the Sega Saturn. It was, sadly, a victim of its own technical prowess: Vampire Savior for the Sega Saturn was an arcade perfect reproduction of the CPS 2 marvel but could only be played with a 4MB expansion cart. In case you are confused, that is the Nintendo 64 sized cartridge you put in that slot on the back of you Sega Saturn. Yes, that one. The one that made us all think we actually had a Sega Neptune. 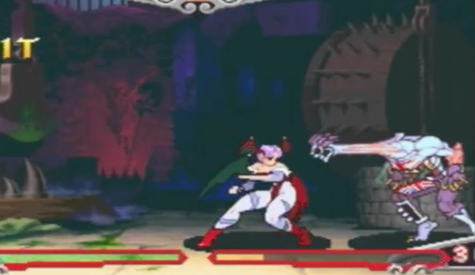 In case you did not know: Lilith is awesome.

So 1998 came and went and Vampire Savior received no domestic home release. In Japan, the game was revised into an “EX” version and released for the Playstation. This is the version that made it over to the rest of the world and what we have for ourselves on the PSN today.

The end result is a game that does not play quite so well as the arcade or Sega Saturn versions it is based on but has more content than any other version of the game save the PSP collection. But no one counts that because it is on the PSP. The Playstation’s inability to properly render sprites is apparent – frames of animation are missing and some characters, especially larger ones like Phobos, get very jerky if you are used to the more fluid sprites you get with Vampire Savior on the Saturn. Fortunately, a few missing frames of animation is something that can easily be lived with when you consider what you get in return: Content. Vampire Savior’s roster in the arcade was kind of weird. A couple of fan favorites like Donovan and Pyron were missing. This was fixed when it made it to the Sega Saturn – the material from the Vampire Hunter 2 and Vampire Savior 2 updates were included. When the game was revised for a fourth time for the Playstation, Capcom squeezed even more characters in and gave the game the same treatment Street Fighter Alpha 3 would receive a year later. Darkstalkers 3 for the Playstation has the most perfect roster of any version of Vampire Savior, including the entire cast from all three games and every update and playable variations of many of them.

Once you get past the few compromises that Capcom made with the frame rate and that signature Playstation loading time, the gameplay is great. It’s that classic mid-to-late 90’s fare that drove us all to the arcades. If you know how to play Street Fighter or Rival Schools, you already know how to play Darkstalkers 3. 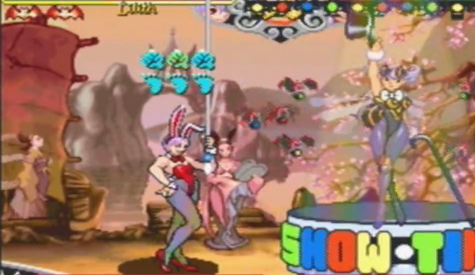 As is typical with Playstation Classics re-released on the Playstation Network, Darkstalkers 3 is all you get. No options or features have been added. You will not be able to get online with friends. You likely will have to fiddle with your screen to get a game that is presented in 4:3 ratio to fit correctly or stretch it to the point that Morrigan looks to have a healthy body weight. You will also have to choose whether or not to turn on the filter built into the Playstation 3’s emulator, depending on how large your screen is. 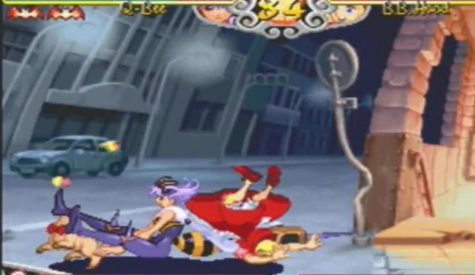 If you choose to spend money on Darkstalkers 3, do it knowing that you are getting a very simple game for yourself. There are only three modes: Arcade, Versus, and Training. There is no campaign. Little narrative. Darkstalkers 3 came out in that time before Street Fighter Alpha 3 would set the standard for what a home release of a fighter would be. Darkstalkers 3 is best enjoyed with your friends over a six pack of your favorite beverage in an afternoon of fun for just a few bucks. Otherwise you might buy this game and find yourself wondering if you are going to get your money’s worth.

Darkstalkers 3 is an insanely fun fighter with one of the best sets of characters in any fighting game ever. It is THE cure for the Street Fighter fan who needs a change of pace. Although the Playstation 3 release is the least technically impressive of all versions, compared to the price you will have to pay for the import copies of Vampire Savior, the $5.99 USD asking price is an absolute steal. Although it is likely that most Sega Addicts are going to prefer to play this on a Sega Saturn or (if they have very deep pockets) the Dreamcast, the PSN re-release of Darkstalkers 3 is going to be perfect for everyone else who just wants an afternoon of mindless, movie monster beat down. 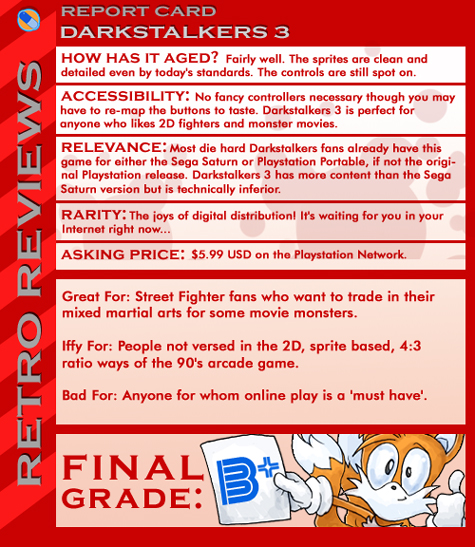