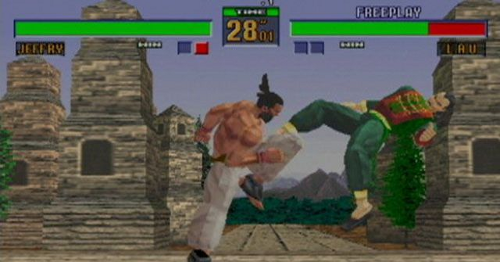 Since videogame companies have learnt how to charge for old games again I never thought we’d see a full retro title as an extra in a game since Shenmue. However Sega has proven my thoughts wrong as Japanese gaming magazine Famitsu revealed that Virtua Fighter 2 will in fact be fully playable in the upcoming Yakuza 5. Keep in mind that this is the second playable game in Yakuza 5 too, as a version of Taiko Drum Master was revealed to be playable last month.

You’ll be able to access Virtua Fighter 2 in the game’s arcade. Once there you will be able to play a quick single player round with the AI, and maybe even a friend as Sega is considering a 2 player DLC add-on. It is however not known which version of the game this will be. This wouldn’t be too much of a problem, if it wasn’t for the fact that the Sega Saturn release is often considered by fans to be a sub-par port at best. When we do find out about it however, we here at Sega Addicts will be sure to report it and any over Yakuza 5 tidbit’s that happens to come our way. So stay tuned as the countdown to the Japanese (and so far only) release of Yakuza 5 draws near. Keep those fingered crossed for a Western release!