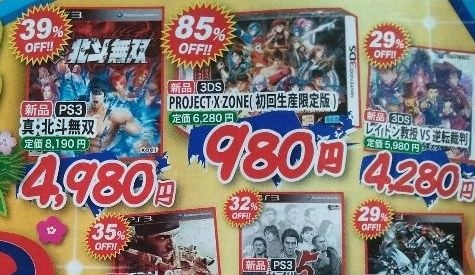 The Namco Bandai, Sega and Capcom cross over game Project X Zone has had its price slashed by 85% by one Japanese retailer. It is suspected that the retailer in question is trying to shift unsold stock as the version on the game on sale is in fact the limited edition box-set. This version was given to customers who purchased the first print of the game and would have usually been expected to have sold quite quickly, however the fact that retailers still have copies this far after its release in October last year is concerning.

PSA: Yakuza Dead Souls out in all territories this week