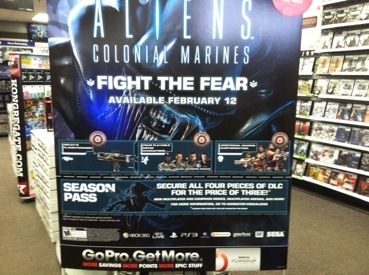 So I walk into GameStop and see this awesome Aliens poster, but then I notice something new outside of the usual ad. The Alien Queen is telling me that there will be a Season Pass for the game! Now, part of me is pretty tired of the whole, “hey you just paid $60 for our game but we want to charge you even more for stuff we should have included initially!” But the other part of me says that its Gearbox handling it, and everything related to Borderlands has always added a good chunk of gameplay to justify the extra price a bit. Either way, it’s awesome that they have longevity planned for game with additional content. The description is rather vague by saying the following:

The website they suggest to visit is gamestop.com/aliens but there hasn’t been any Season Pass-related info posted there yet. Stay tuned to Sega-Addicts as this news develops!