The year is 1995, and Kazuma Kiryu is a Yakuza member of the Tojo clan arrested for a murder he didn’t commit. After being in jail for 10 years and kicked out of the Tojo Clan, he returns to the district of Kamurocho. Ten billion yen is missing from the Tojo Clan, with a mysterious little girl named Haruka directly tied to the incident and Kazuma’s past. He must both protect her and get to the bottom of missing money while being targeted by the Tojo Clan. This is where the Yakuza, or Ryu Ga Gotoku, series all began and now returns in the form of Yakuza Kiwami. Using the same engine as the previously released Yakuza 0, Kiwami looks to completely remake the original PS2 release with modern gameplay conveniences and a visual and audio overhaul. This was my first time actually completing one of these games, as I’ve really only researched the series immensely in the past. Does Kiwami manage to become the definitive version of the original game, or is  too reliant on elements of Yakuza 0? If you haven’t read our review of Yakuza 0, make sure to click here! 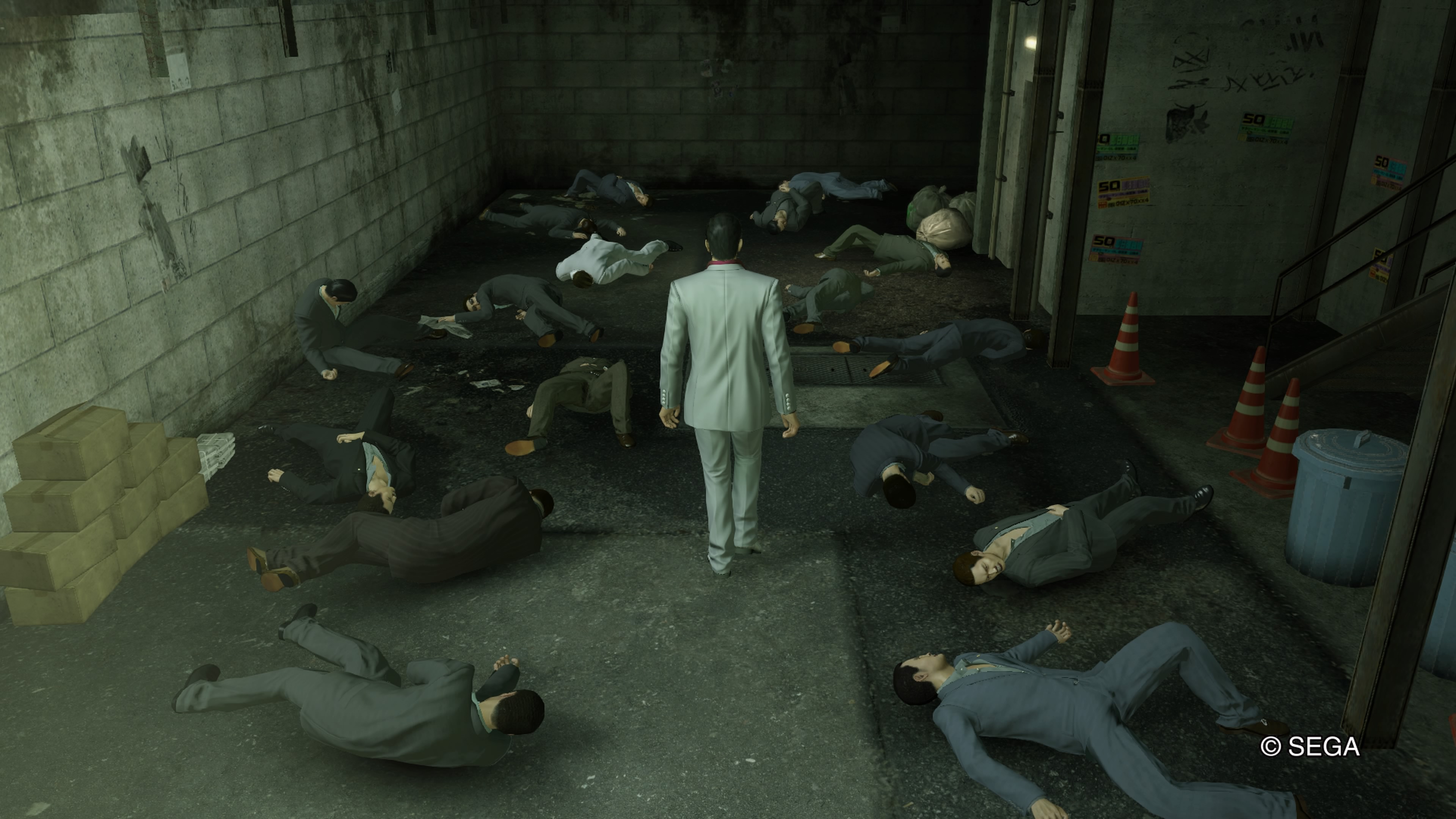 The Yakuza games have always been very story heavy RPGs with nonstop beat ’em up gameplay, and it really manages to get the best of both worlds. The district of Kamurocho, the site of the 20+ hours of Yakuza Kiwami,  is absolutely gorgeous. Shops, bars, arcades, substories, and more are all available to take part in and Kiwami manages to make every aspect of Kamurocho packed full of content. When you aren’t exploring or viewing cutscenes you are in street brawls, where most of the combat in Kiwami takes place. The combat was imported directly from Yakuza 0 with minor improvements, including the ability to change combat styles after combo finishers, enhancing the fluidity of combat. It’s a wonderfully fun combat system, and every engagement with thugs is exhilarating. The heat system returns to how it was in the original game, with one bar instead of three like with Yakuza 0. The more you attack enemies, the more heat you build up until you can do one of many stylish heat moves based on the environment. 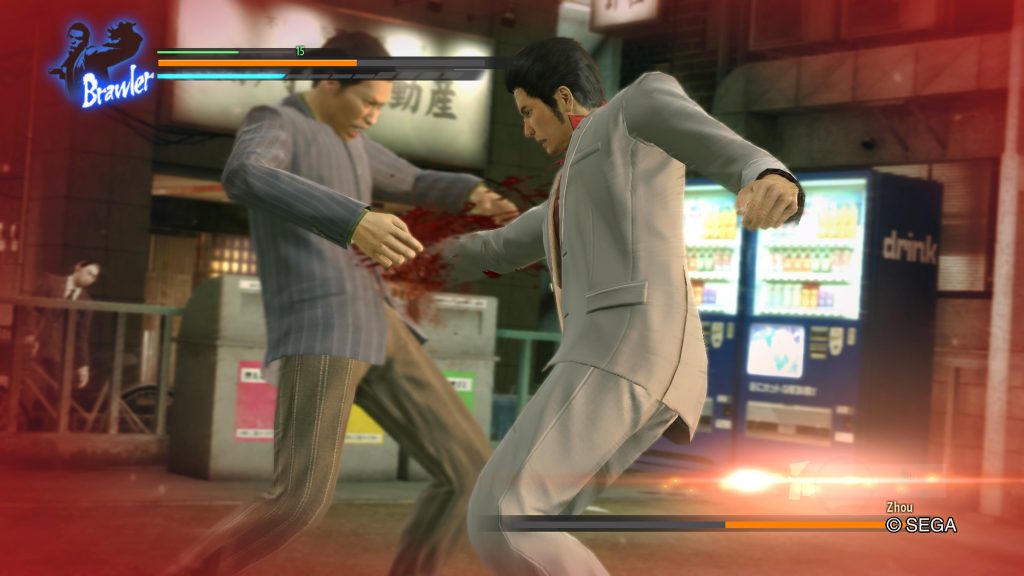 The Brawler, Rush, Beast, and Dragon styles are also the exact same from 0, meaning the original Yakuza’s combat has been completely replaced. However, the Dragon style has been dramatically altered and requires players to put a lot of time in the new Majima Anywhere system. Series favorite Goro Majima will roam the streets of Kamurocho after Kazuma becomes rusty from his time in prison. He’s always looking for a good fight, and has a ton of wacky and insane segments that serve as the only way to level up Kazuma’s Dragon style. It’s an incredibly fun experience, but I wish it wasn’t the only way level up such a cool style. While the Majima Anywhere system and the Yakuza 0-styled combat are fantastic additions, there are some unfortunate problems with the original game that were not addressed. The bosses have been brought over in their entirety, and they remain just as bad as they always were. The Yakuza 0 bosses were amazing, so seeing the developers not try to improve the old fights with their new experience is unfortunate. What’s even worse is a new cool down feature, where bosses will stop randomly in fights to regenerate a lot of health. The only way to stop this is to use nearly all of your heat for the game’s only new heat moves. These look absolutely awesome, but this feature was annoying and I dreaded it’s inclusion in every boss fight. 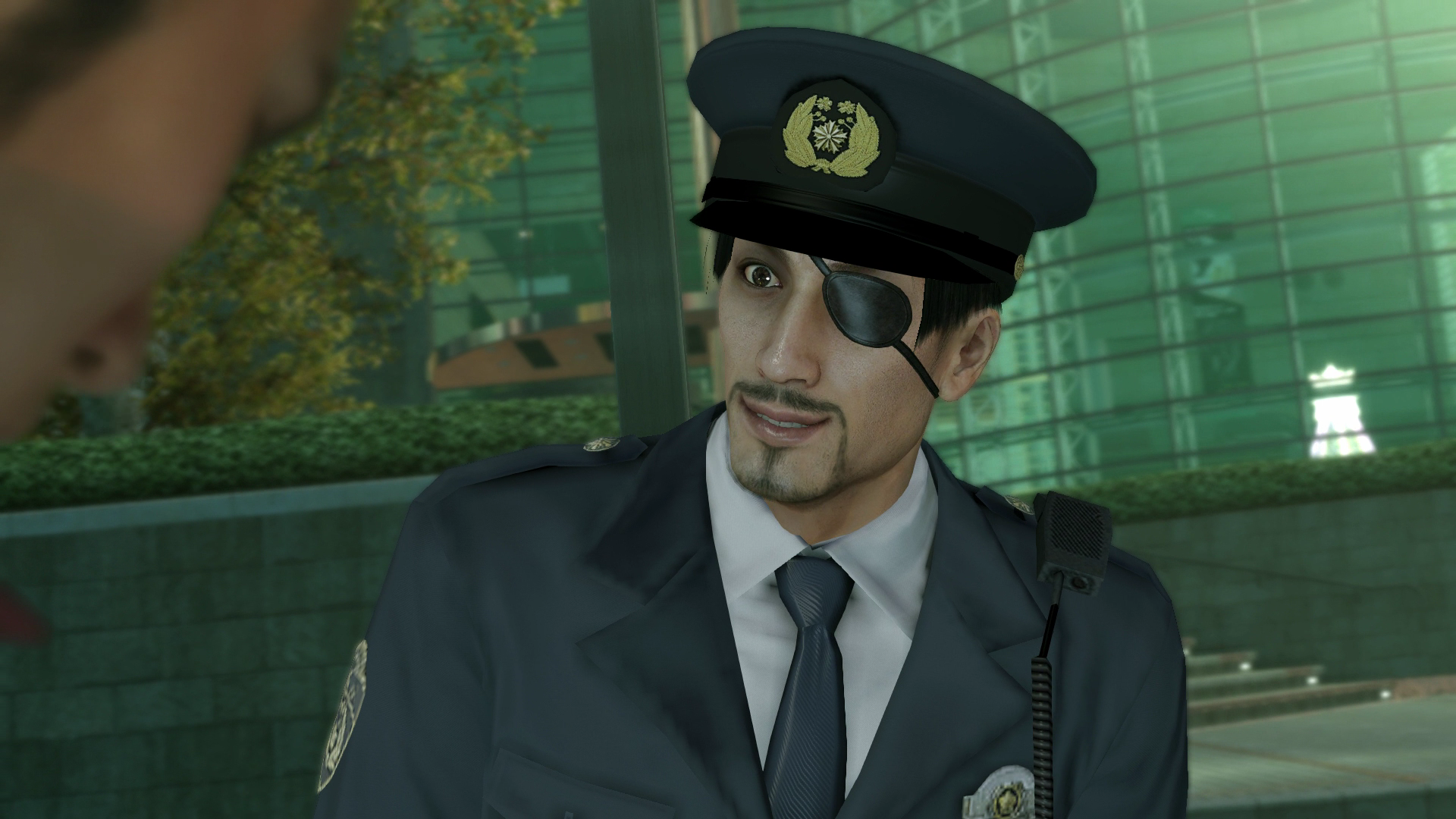 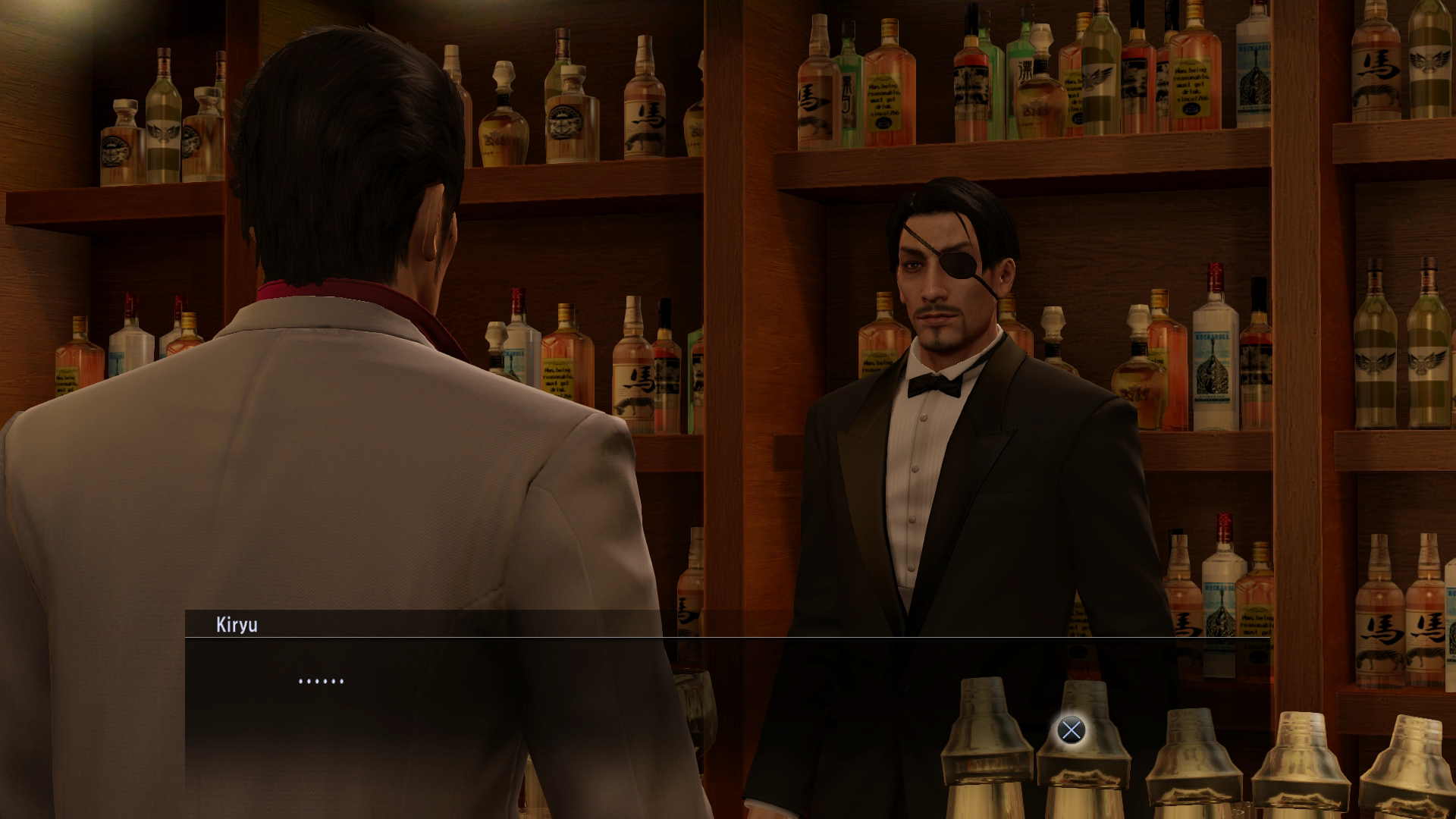 Lastly, the visuals and music bring back the gorgeous flare the engine of Yakuza 0 brought to the series. All of the environments and character models are stunning to look at, and the remixed music does a good job at making every encounter exciting. If there’s one nitpick I had with this remaster, it’s that mouth animations seem to often be pulled straight from the original PS2 release. Character mouths occasionally just open and close, and it looks jarring compared to the scenes with redone mouth work. Another thing I missed from Yakuza 0 was the battle music remixes that change depending on the selected style, but the developers were most likely just trying to stay faithful to the original sound direction. With 1080p 60fps performance, Kiwami brings the same fantastic experience presentation that Yakuza 0 did. 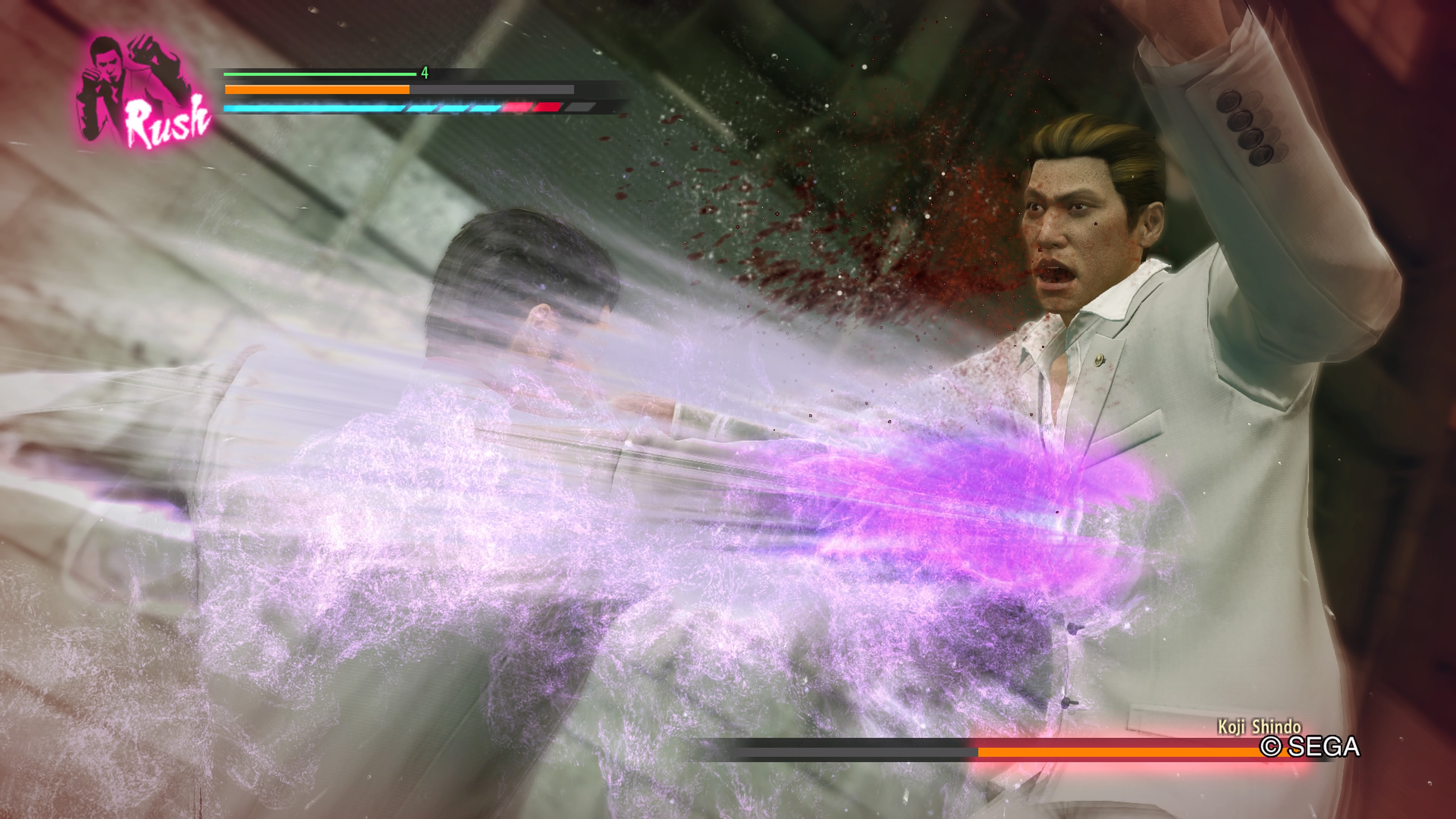 That being said, it feels too much like Yakuza 0 for it’s own good. Yakuza Kiwami is far from a bad game, it’s even a great one, but it never manages to become as amazing as it could be. Yakuza 0 was so fantastic because it was a celebration of the entire series, and Kiwami just reuses many of those assets. Outside of boss fights, you’ll be sure to have an absolute blast with Yakuza Kiwami. Featuring an amazing crime drama story mode and fluid combat, for $30 this is an absolute steal. If you let yourself get lost in the fantastic world of Yakuza, you can easily put 40-60 hours into this game. I hope the newly announced Yakuza Kiwami 2 learns from some of the mistakes of Yakuza Kiwami, and improves what it got right. 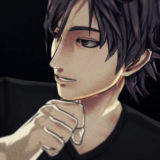