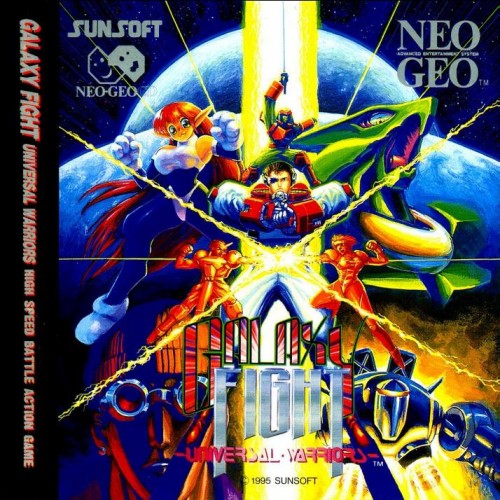 Monkey Paw has been doing the Lord’s work by bringing many PS1 games that never saw release on our side of the world to the PSN. Unfortunately it seems that a lot of the games they’re bringing over are titles that… no one really asked for. Sure, Galaxy Fight is semi-culturally important in game’s history and the development of the fighting genre, but does it really hold up?

In Galaxy Fight you choose a fighter from a roster of heroes that look like they were torn from a How to Draw Manga book. 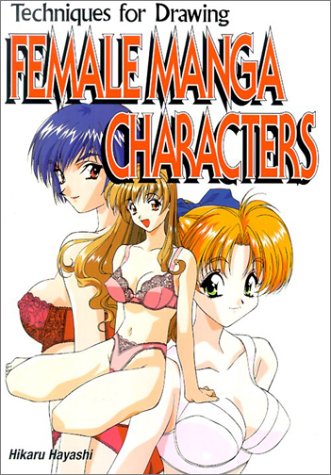 The rest of the title was "While Remaining Respectful to Women," but that didn't fit on the cover with all the tits.

Seriously, there’s a robot, a space ninja, your racist stereotype, a busty furry chick who seems to be the most popular character from the game. At least according to any Google image search I’ve done for the title. Hell Rolf even wears a goddamn scouter.

The gameplay itself isn’t as generic as the character selection but it certainly feels like a fighting game from the mid-90’s. In fact it feels a bit old school even for the time. While most games featured 2 or 3 bars in their HUD for special moves or combos, Galaxy Fight just has a health bar. There are no super moves and only a few combos and special attacks that are very difficult to pull off. This lead to me mostly sticking to the normal attacks segmented into your usual weak, medium and heavy attacks. Controls are mapped to the D pad and if you’ve ever played a fighter on the PS3 you know my thumb was KILLING ME after the first couple rounds. If you’re going to play this, get an arcade stick. All the issues with the controls are magnified by the super cheap AI. 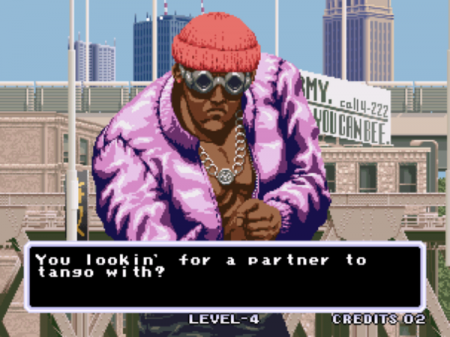 I think he means, "with whom to tango."

Galaxy Fight has some of the cheapest AI I’ve ever encountered in a fighting game. The enemies will move at lightning speed, countering every attack you throw at them. This is when you can get near them as every computer player seems to fight exactly the same by sprinting backwards and rushing in to tap you with a quick combo and retreating back to the opposite direction. They have plenty of room to run because the one innovative feature the game could tout was infinitely scrolling backgrounds. Galaxy FIght was the first game to feature infinite backgrounds which is pretty cool but would be a lot nicer if the environments were more interesting. Some of the boards feature some flashy effects like reflective pools and the little creatures running around Roomi’s stage but get really boring, really fast. The character select music has some sweet bass but outside that most of the music is pretty unremarkable, punctuating the wholly bland feel of the entire game. 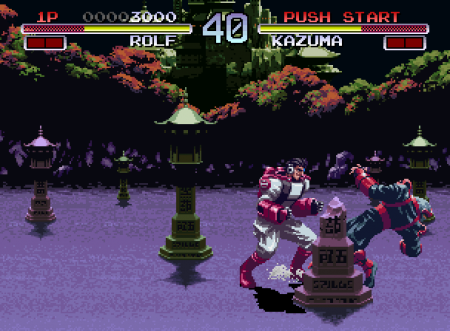 Most of this is forgivable as Galaxy FIght is Sunsoft’s first foray into the fighting genre and it did lead to Waku Waku 7, but do we really need to play it again? I guess at 6 bucks it’s fun enough and if you want to see where most of the stuff from Waku Waku 7 came from, check this out. If you’re just a fan of fighters who’s looking for a good game, skip it. And don’t worry about the game being in Japanese like the other PS1 imports we’ve gotten so far. Anything you need to follow the game like voices and character names were already in English. The worst thing about this port is the incredible load times. Sometimes you’ll have to wait for a load screen to load the next load screen. Not kidding. Plus, it’s a fighting game. Who cares about the ‘story’, right? Oh god, stop hitting me.