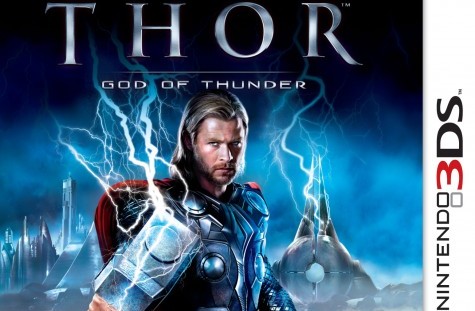 No, you didn’t accidentally click the “Back” tab 20 times. Coinciding with the release of the DVD, the 3DS Thor comes nearly five months after the film’s theatrical release. Remember this past April? Remember three little Thor games that came out back then? Remember how much we projectile vomited after playing them?

No? Well I do. And yet here I am again, writing another review for another game based on that hammer-wielding goofball. You might call me crazy (and you’d probably be right), but I just can’t help it. My curiosity has been eating away at me for months. Could all this extra development time make that much of a difference? Could the 3DS hardware finally offer an appropriately empowering Thor gaming experience? Will I finish the game as a proud owner of a brand new vomit-encrusted 3DS?

The answers might surprise you. Or not. Who knows? I do! SO HIT THE JUMP! 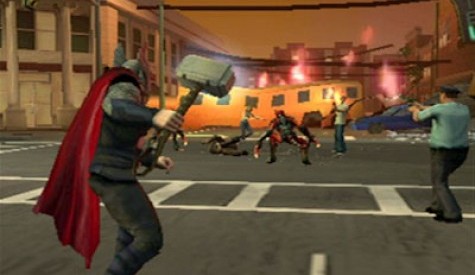 Right off the bat, I have to say that this was one bizarre experience. The presentation of this game is so similar to that of the XBox 360 version that I often felt bouts of vicious déjà vu and PTSD while playing it. Obviously, the game is based on the same film, so this was to be expected, but it’s a shame that so much of the 360 Thor’s lukewarm visual and audio presentation has crossed over into a title that has ostensibly been given a lot more thought.

Luckily, this problem doesn’t affect the in-game visuals too universally. Sure, the textures are consistently bland and the character models similarly uninspired, but the sheer scope and variance of certain environments really puts the older games to shame. The level design is basic and repetitive, but inspired little moments that have you battling on top of sliding glaciers Niflhelm or blowing out fires and shattering glass inside of a burning office building in Midgard help to balance out all the incessant hammer throwing.

The best example of this has to be the flying segments interspersed throughout the game. The developers have finally decided to make use of Thor’s power of flight to drive some relatively entertaining gameplay. It’s obvious that these gimmicky moments were thrown in to satisfy the handheld’s 3D capabilities, but the occasional switch in gameplay is a welcome modification. I often found myself eagerly anticipating the opportunity to soar down the next gaping, highly destructible corridor, laying waste to everything in sight. 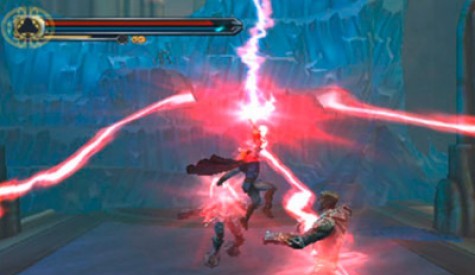 Which brings me to what the 3DS Thor does best – destruction. One of my biggest gripes with the 360 game was just how floaty and disconnected Thor’s hammer felt. The controls were convoluted and unresponsive, and Thor’s buggy animations belied the “might” that Thor’s hammer was supposed to imbue. On the 3DS, animations are screen-shakingly powerful, attached to moves that are somewhat varied and fun to string together. Once you’ve unlocked the bulk of Thor’s moveset, there’s actually a wide array of defensive and offensive moves at your fingertips, and since many of them are mapped out to a simple touch of the stylus screen, they are all very easy to use. This is made even more rewarding by a strikingly boisterous sound design and the destructible stages that surround you. After three games, it finally feels like everything is there for your disposal, something essential to a title based on the God of freaking Thunder. 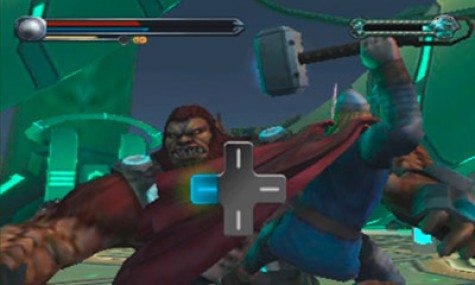 The upgrade system is much more streamlined this time around as well, adding in a perk system that allows you to imbue Thor with extra advantages on the field. It seems everybody is doing this these days, but for good reason. Since your increasing hit combo is what lets you upgrade your character, it makes a hell of a lot more sense to plow through the endless repetition that this game promises in order to progress.

Further improving the game’s sense of awe and power are the bosses. Whereas the older games did virtually nothing to set their creatures apart, the 3DS Thor offers unique battles for each world. In Niflheim, you will soar through a massive ice chasm, dodging giant spikes, eventually hurling your hammer into Ymir’s ugly mug. In Asgard, you will fight a giant beast that grows and shrinks based on the damage you’ve done. At their core, these battles are just gussied up versions of the same old “Punch, Punch, Punch, QTE” formula, but having the occasional gargantuan foe helps to break up the repetitive combat just a little bit.

That repetition is probably the biggest misstep taken with the 3DS Thor. The combat may be weightier, with a combo system that incentivizes your progression, but that doesn’t change the fact that this formulaic gameplay is essentially all you will be doing throughout the entire game. I started every stage with the same enthusiasm, ready to beat my foes to a pulp using some of the game’s admittedly clever moves (like controlling a tornado to collect enemies into one swirling whirlwind), but the repetition almost always got to me. Even the flying segments, which serve as a respite from the standard gameplay, consist of simply dodging bullets and mashing a single button over and over again. It’s obvious that the effort was put in to keep things interesting, but even those elements start getting dangerously boring in the latter half of the game. No amount of spice can make a meal taste refreshing if you’ve been eating it for the past six days straight.

In the end, the 3DS Thor resonates as a solid beat-em-up with occasionally interesting visual and sound design. The flying segments and a somewhat competent combat system help to keep things fresh and interesting for a little while, but nothing ever really pulls the game above being midlevel “decent.” Against a backdrop of movie game crap, this game looks like it’s what we’ve all been waiting for. Against any other quality example of the genre, it doesn’t really look like it’s anything all that special.

If you harbor any interest whatsoever in a Thor movie game, this is the one to pick up. Just don’t be surprised if you will forget about it about 45 minutes after you’ve popped it out of your 3DS. C+