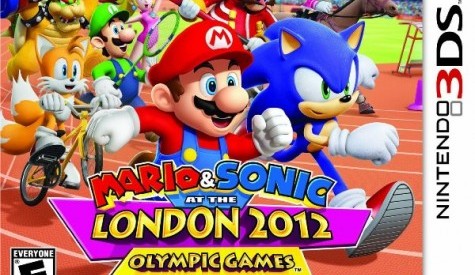 I will admit that I went into Mario and Sonic at the London 2012 Olympic Games with an open mind, because I heard the Wii version was pretty good. The 3DS deserves an excellent party game after all. Did Mario and Sonic succeed in providing a pleasant experience that anyone can pick up and play? Hit the (long) jump to find out (I promise that’s the only pun I will use in this review… paragraph).

Mario and Sonic at the London 2012 Olympics, which will from here on be referred to M&S London, includes over 50 different sporting events in the form of mini games. The main story mode of the game (yes they tried to give this game a plot) is poorly scripted from the beginning with a story going as follows: Dr. Eggman and Bowser discover they were not invited to the London 2012 Olympics and become jealous, because they trained so hard to win fair and square, so Eggman creates fog-generating machines in hopes of the Olympics being cancelled. It is Bowser’s job to force his Koopa troops to guard said machines while the fog also creates phantasms of all our favorite Mario and Sonic characters. While catching wind of the scheme, our heroes must challenge the fog phantasms to Olympic events in order to save the Olympics.  So there you have it: a plot hole as the major plot point. Colored fog is preventing the Olympic Games from progressing, but somehow Mario and Sonic take part in Olympic events to save the stalled Olympic games. Oh, and Dry Bowser shows up with accompanying Dry Bones. Can Mario and Sonic save the Olympics?!

The sporting events in M&S London are somewhat of a mixed bag in terms of enjoyment and efficiency. Some of the games incorporate the 3DS functionalities fairly well. I did keep the 3D effect on for the majority of my playtime, because it did add to the carefree “Saturday morning cartoon” atmosphere, until I had to blow into the system microphone. The problem with using the mic while viewing games in 3D is that you have to be closer to the system than you should be to see 3D images comfortably. This combination gave me a headache while I blew my lungs out. I’m sure the 3DS enjoyed every minute of it though. Regardless, once I toggled the 3D off, I actually enjoyed the blowing-type games more than most sporting events because I knew just how ridiculous I must look while playing them. When playing these games with a friend, it was difficult for both of us to keep our composure in check, which made the games all that more fun.

"Just like a bath but more exhilarating!" says Wario

Using the stylus made sense for most games such as archery to pull the arrow back (slide stylus down), floor/dancing (tapping, sliding, scribbling), and shooting moving targets (tap the screen as targets scroll from left to right). Where the stylus made no sense was during the baton pass, which involved scribbling and then timing a careful tap just right to pass the baton instead of hitting a button. Also illogical, was dragging the stylus back and forth rhythmically for the 20km Race Walk. There were many times when I felt the screen was ignoring my tapping, which caused me to lose an event. The touch screen was also uniquely used when you were required to set down the 3DS system and tap the left and right side of the screen with your index fingers while swimming or running for some events. I thought this was intriguing at first, but soon grew tired of having to place my 3DS on my lap and instead found ways to cheat the system and just bash my thumbs on the touch screen. Did I just cheat the Olympics?  I’m sure Johnny Knoxville would approve.

Games incorporating the accelerometer were the most frustrating part of M&S London by far. Let me explain the game of basketball, or more specifically the game of free throws. You must first hold the 3DS system upright in front of you, completely vertical. You are then told to tilt the system forward or backward to command your character to walk towards the foul line. Lastly, ever so gently, you must thrust the 3DS system forward to actually shoot the ball. I can tell you with 100% confidence that this mini-game is completely determined by luck, because I tried it multiple times without ever moving my 3DS from the same height and only made half of the required shots. This lack of consistency boggles my mind as the fencing event using the accelerometer is incredibly simple and almost impossible to fail. Perhaps I’m still not used to accelerometers in video games, but M&S London further adds to my frustration of being forced to steer my system like a sled in the snow.

Within the button mashing and screen scribbling were also sporting events that used the circle pad and the buttons at the same time. To classic gamers, this may sound awesome at first, but once you realize how the game actually wants you to use them, that joy is soon pushed away. For many events, the game will tell you to press “A, B, X, or Y,” and “left” on the d-pad or push the circle pad left, all at the same time but within one second of time. If one of the buttons is not pressed in sync, you lose the event. I honestly do not understand the logic behind this play style and for someone who is not a huge fan of Quick-Time-Events, these events were some of the most frustrating.

When did I put Street Fighter in my 3DS?

M&S London also has a handful of games that could stand on their own as full games rather than short minigames including beach volleyball, archery, hockey, boxing, and even table tennis. It would really be in Sega’s best interest to shrink the event roster down and really extend the quality of the events rather than creating short games with shoehorned mechanics. I know I would feel more inclined to pay the $40 price tag if I knew I was getting quality over quantity.

Mario and Sonic at the London 2012 Olympic Games could have been a more solid game if Sega did not try to use every single ability of the 3DS and instead made an enjoyable sports game with simple physics. I can definitely see myself suggesting a quick round of archery, table tennis, or sailing to my 3DS friends, but only as an absolute last resort. Likewise, this game should only be bought as a last resort and at a cheaper price unless you need something to do on a 1-hour road trip, or to replace your latest bathroom read.

The few enjoyable sporting events save this game from earning an “F,” but just barely and only because I love watching people blow at an inanimate object.