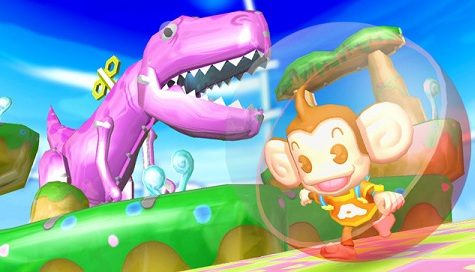 I won’t lie, I had forgotten that this was coming out. In fact, because of the game’s earlier release and somewhat peculiar advertising campaign in Japan,  I was under the impression that this game was already available in Western territories.

Embarrassment aside, here’s hoping that the game does well in the West as helps boost the often criticised PS Vita library. Check out the full press release after the jump.

Players will join AiAi, MeeMee, GonGon and Baby on another grand adventure through time, space and texture! Over 100 levels of bumpers, jumps and humps will test your skills with the sphere; fan favorite party mode games like Monkey Target and Monkey Bowling round out an impressive collection of competitive multiplayer challenges! Taking full advantage of the unique PS VITA features like the rear touchpad, camera, accelerometer and more, Super Monkey Ball Banana Splitz is the ultimate puzzle experience for Sony’s handheld device.