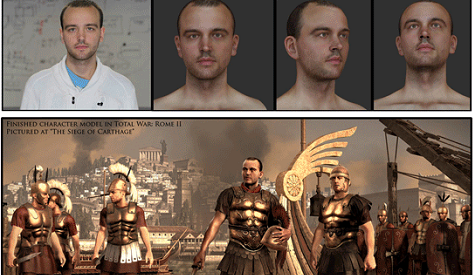 In the summer of 2012 a Total War fan by the name of James was invited to play the upcoming Total War: Rome 2 at UK based Creative Assembly Studios far before the game had even reached an alpha stage. James and his brother toured the building, met and spoke with key developers and even offered his own suggestions as to how to improve on the game from previous titles. Perhaps the greatest part of his trip though was being immortalised as a Roman soldier who will be present in the game’s reenactment of the Siege of Carthage.

James was given this fantastic opportunity by British charity Willow who organise incredibly special days out for the terminally ill. Sadly, James succumbed to liver cancer shortly after his visit to Creative Assembly. Total War community manager Craig Laycock shared his memories of James in a recent article on Eurogamer:

When I recently learned that James had died, it was devastating. Even though I had only spent a few hours in his company, it was absolutely devastating, because he was able to show us all here in the studio how passionate he was for our games.

In many ways, James represented what’s best about working in video games: crafting games that people enjoy and that stay with them. It’s why we all do what we do, and why we’re so passionate about it. He really brought that home to us.

More words from Laycock on James’ visit can be read via the source.