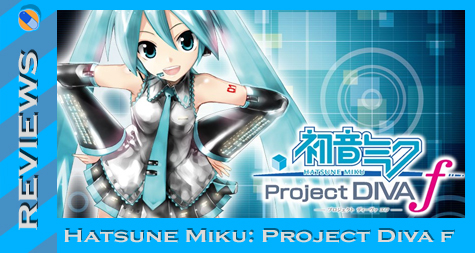 When I was asked to review Project Diva f for the Playstation Vita, I knew this would be a challenge. After all, Brett did a really good job reviewing the PS3 version, and pretty much covered all the major points you’d want to know about the game. So if you want to learn more about Miku and about Project Diva f in general, I would recommend reading Brett’s review first, as I’m going to try and avoid covering the same material. After all, I do believe I have somewhat of a different perspective to approach this review, because, to reiterate what I’ve said in the Sega Addicts After Hours, Miku is what got me into Sega in the first place.

Importing always seemed like something beyond my reach growing up. Hell, in the 90s, the idea of growing up to be a game developer seemed far out of reach as well. Console games were mysterious things that came from Japan, with weird characters. Mind you, these perceptions were not completely true. Many 8 and 16 bit games were perfectly playable with only minor or no console modification, and PC game development was quickly taking off for all regions. Finally, in 2005, importing blew up in a big way with the release of the PSP, a completely region free console, with bite sized games that could easily be understood. Four years later, Project Diva made its debut on the console and blew my mind.

The Project Diva series has since created many iterations, each one adding upon the foundation. That said, I feel like Project Diva f on Vita is a classic example of two steps forward, one step back; and even though the series was born on a portable platform, in the debut Western release, it has been eclipsed by the PS3 version.

One thing I would like you to do real fast is scroll to the bottom and look at the score. I don’t mind, seriously! I request this because I’m saying from the get go that I love Project Diva f. Love it so much, that I can’t help but be extremely critical in a review. That said, the critical points I’m going to bring up are purely a matter of me playing and loving every release of this title. I absolutely feel this release has some problems, but I still think this is a fantastic game you should definitely buy. Also, once again, I’m going to be writing this assuming you already read Brett’s review. Are we all on the same page? Good! 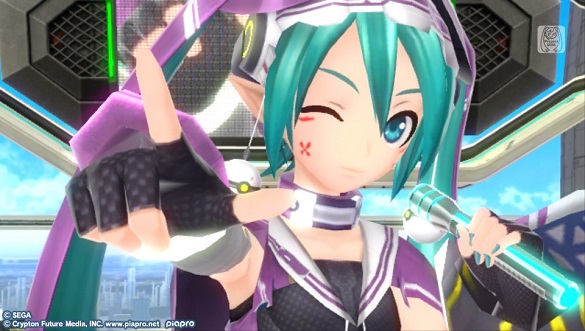 So lets bring up some positives. If you’re a fan of the previous Project Diva games on PSP, this is just more of what you already like, and prettier too! Beautifully crafted visuals truly bring Vocaloid to life. Each character’s song videos feel like the characters belong there, instead of character models inserted into them. This has never been a problem with the Diva series, but considering that’s exactly what this series is, it’s always a danger. 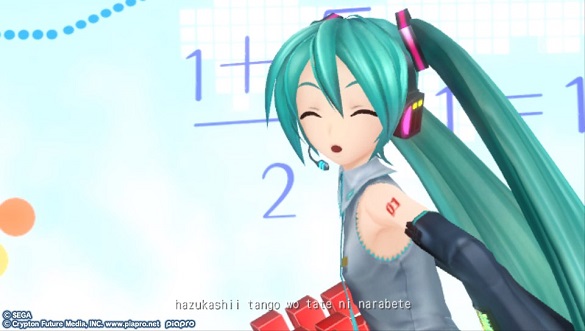 Brett has previous expressed disappointment that the game doesn’t translate song lyrics, and instead only converted it to romaji. While I completely understand this, I kinda disagree. I’m the type who likes to sing along while playing, and seeing the lyrics romanized makes this a far easier task than before. I’m also a total nerd so there’s that.

There are; however, some things left untranslated that do not make sense to me. Specifically, unless you already committed to memory common Japanese phrases, you are going to have less fun playing the DIVA Room feature. It would have been nice to see some subtitles here. Also, subtitles would not have gone amiss for the spoken “congratulations” words the characters say after you finish a song. For people who are already fans of the series, these translations will not be missed, but new fans will probably be confused by their omissions. 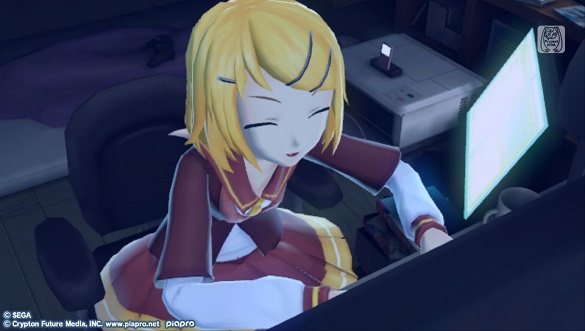 There are several new features in Project Diva f and some of them are actually upgrades. There is now a progress bar at the bottom of the screen that changes color depending on your rank in the song. No more finishing a song and wondering if you cleared it or not. Every song also includes two technical zones, which if you hit every note with a “Cool” or “Good,” will grant you a significant bonus to your rank bar. This does lead to a problem where it’s very difficult to get a better than passing rank if you do not clear both technical zones, but most of the technical zones are not challenging enough to make this a problem. 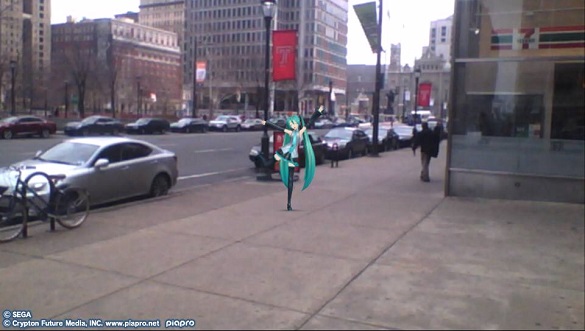 Another feature for Project Diva f is AR functionality. You too can go out into the world and take pictures with Miku, or if you’re Scotty, in your freezer. It’s all a great and fun idea until you realize the Vita has the worst possible camera, and putting these beautiful Vocaloid characters into these terrible photos only makes the picture quality more noticeable. In the end, it won’t be a feature you end up using unless you really want pictures of Miku in your futon.

A new issue with Project Diva f is the touch screen notes, the Star Notes. These are notes which require you swipe the front or back touch (depending on the options screen) to hit. On the PS3 version, these were activated by a simple flick of the stick, which was awesome! The touch screen, on the other hand, often feels less precise and frustrating, especially when there’s a long string of sequential star notes. These touch screen notes are responsible for 90% of my broken combos and I hate them. The most annoying part is the Vita has two sticks that would be perfectly serviceable for the flick technique, but you are not given the option.

And actually, I would say my biggest problem with Project Diva f, is that star notes, is the only real innovation to this version. Diva Room is a returning feature. Editing is a returning feature. All off the game’s feature’s have been refined, but not new. It is a collection of ideas sitting on top of an extremely solid foundation. Mind you, it isn’t broken, and they know they don’t need to fix anything, and I factually know I’m having fun and will buy Project Diva f 2nd, but I’m not necessarily happy about that fact either. If you want an example of a rhythm game series constantly reinventing itself without breaking the foundation, I highly recommend the DJ MAX games. 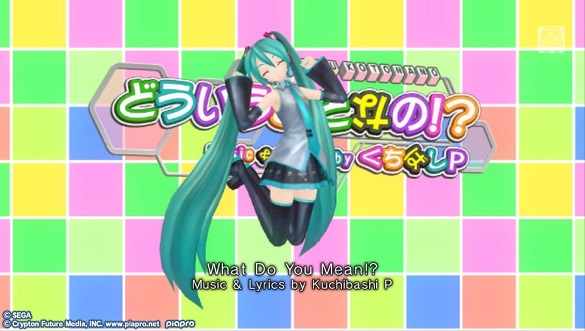 Even with that complaint, I can’t call Project Diva f a stale game either, because it is one of the best in its genre. I would; however, recommend the PS3 version over the Vita. Project Diva was once a solitary experience, but with a big screen version available, I am hard pressed to find a reason to keep it that way. It is absolutely a great party game and loses nothing by being non portable. If anything, playing it on your TV will bring you back to the glory days of hours of Space Channel 5.

Besides, you’re not going to play the Diva Room feature in public, right? 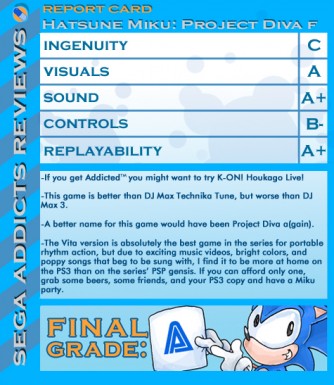