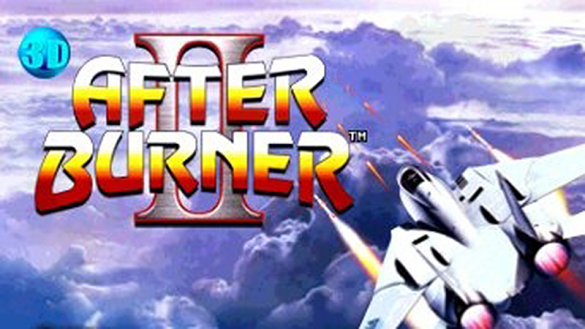 It’s been a while since Sega released any of the 3D Classics outside of Japan. That in mind, a lot of us are more than ready for the next wave. To kick it off, we have After Burner II that originally released in 1987 in arcades and has since been ported to many Sega systems.

Each 3D Classic has brought something new to the table, so what does After Burner II do that its earlier versions have not? Pull up on that throttle to find out!

This 3D Classic port holds true to its roots by being more challening than most arcade titles on the eShop. I barely made it through the first 2 stages without dying. Wondering if I was missing something, I explored the options screens to check out my control scheme options. The default were as follows:

B – Missle (after targeted)

Interestingly enough, you can use the 3DS Circle Pad Pro (CPP) with this game. Being one of the 15 who still own a launch 3DS and CPP, I had to experiment. Surprisingly, I had an easier time with the CCP than without. Now having 2 sets of shoulder buttons, I reconfigured the controls so that I used the L and R buttons for Vulcan Canon and Missles, and then used the ZL and ZR to Accelerate and Decellerate and found this much easier to maintain in the arcade insanity that is After Burner II. 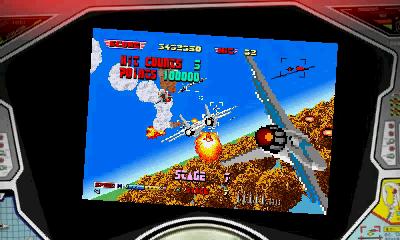 The bonuses added to After Burner II include some things for fans and some things for newcomers. The 3D view is a hit or miss as per most ports, but it didn’t give me a headache like most ports. The fans will appreciate the different screen sizes and moving HUD. You can pick from 4 different cockpit styles to reminisce of the arcade cabinet, which go as far as to glow red near the top where the “Danger” lights are located. This border also moves separate from the screen itself to give you the feel that you really are sitting in your favorite aracade. All you need now is some gum on your shoes and flannel-wearing punks breathing down your neck!

Another addition to the game is the ability to tweak nearly everything in the audio department with an equalizer, and the ability to save those options. You can also turn the “Enviro SFX” on and off, which were recorded from an actual arcade machine. What this means is that you can hear all the clicks and clacks that the original cabinets made. This may mean nothing to new-comers, but fans will definitely appreciate the extra touch. 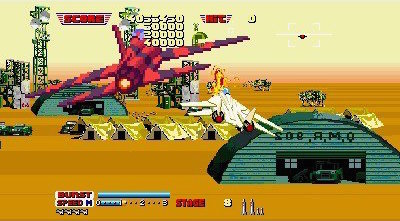 For newcomers, there is a “Special” mode unlocked after playing through the original mode once. This mode introduces the Burst ability, which is essentially momentary bullet-time you can activate with the A button. The Burst makes a big difference in the more insane parts of levels, and was a welcomed addition to new pilots like myself.

In the “Special” mode, you are also in pursuit of an unknown pilot, who you encounter through out the game in a variety of levels different from the original mode. This gives the game a feel of a story mode, and adds some variety to the port. There are also a few references in-game and during the credits to Outrun and Super Hang-On, which made me smile.

Overall, 3D After Burner II is a very short game, but does offer replay value with it’s “Special” mode, and the obvious arcade scoreboard. Whether or not you are new to the series, as a Sega fan this game is definitely worth checking out as a part of Sega’s history. The asking price may be a little steep considering how short the game is, but that’s expected in arcade ports. Regardless, this is a game that should be part of any Sega fan’s library, and a great choice as one of the 3D ports.

Wise from your gwave! Altered Beast 3D released in Japan