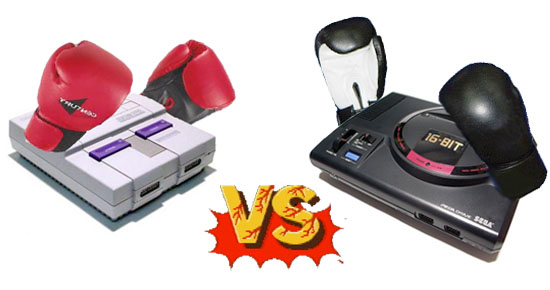 If you walk up to any kid who owns one console and tell him you own a different console, he’ll probably call you a faggot. What causes this rampant console fanboy-ism in gamers? Are they just jealous of people who can afford more than one game system? Or do they GENUINELY think owning a PS3 makes you a faggot.

Back in the day, your mom could walk into a K Mart to buy you a new video game system, look at the wall in the electronics section and see Sega Genesis, NES, SNES, Sega CD, Atari Lynx, TurboGrafx-16, TurboExpress, Neo-Geo, Amstrad GX4000, PC Engine, Atari 7800, Commodore 64, Game Gear, Gameboy, Philips CD-I, and the Pioneer LaserActive all on the same goddamn wall. She’d have NO fucking idea what to do.

Game companies had to draw attention to themselves and away from the competition. How did they do this? By telling you what a piece of crap the other games were.

It started out innocent enough. Check out this ad for the Genesis from when it was first released:

Catchy, right? “Genesis does what Nintendon’t” became the official slogan for the console:

Look at all that original IP

And at the time it was kinda true. The SNES wasn’t out yet and the NES was only 8 bit as opposed to the Genesis’s 16. But then the SNES came out. It boasted more colors, a better sound chip, and soon a better library of games. So Sega had to play a little dirty:

Look at this. Shameful. SHAMEFUL!
First of all, what kind of store is this? Some empty gray warehouse that only sells ONE Sega Genesis and ONE Super Nintendo? The most unfair thing in the ad has to be having the prices right next to each other to demonstrate how much more expensive the SNES is than the Genesis. The kid even mentions it. They DON’T tell you that the Genesis has been out for two years and the SNES is brand new. When the Mega Drive/Genesis was first released in the US it cost $190.00. That’s only nine dollars cheaper than the SNES on release. And I don’t know what the salesman is trying to do. He’s just yelling the names of things and making noises. It’s like the guy’s just imitating every Sega ad ever:

He also immediately points out the colors on the SNES, mocking the way Nintendo used that as a selling feature. It’s a much more legit thing to sell your console on than Blast Processing. Oh you don’t know what Blast Processing is? Well this ad oughta clear that right up for you:

It’s obvious now, right? Oh yeah, that ad didn’t explain shit. It was just a bunch of guitar riffs over random clips of Sonic the Hedgehog, Ecco the Dolphin and a racecar. That’s because Blast Processing is a load of crap. It was a bullshit buzzword made up by Sega’s marketing to make kids go to school and tell their friends “Blast Processing is what makes Sonic go fast.”

While we can’t blame console fanboy-ism on the console wars of the 90’s, they certainly turned it up to 11. I grew up with a Sega Genesis and I love it dearly. It’s still hooked up to my TV. Know what sits right next to it? My SNES. I love it too. I didn’t have one as a kid, I only got it years later, but I never hated it because I had a Sega. Hell, that only made me want one more.

So if anyone calls you a faggot because you have an Xbox, or a PS3 or a Wii just ignore him. On the inside He’s just a sad little boy crying because all his friends are playing Super Mario World and he just has his cousin’s old copy of Awesome Possum. And remember, Genesis does what Ninten-aw screw it. 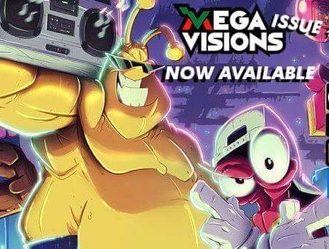