I’m not a fan of most simulation games that happen to be grounded firmly in the basis of reality. I prefer futuristic simulations like Chromehounds or Steel Battalion where there are realistic elements combined with an overlaid scenario that requires some suspension of disbelief. This is what brings me to 688 Sub Attack, a game that appeared on the PC and Mega Drive before finally making an appearance on the Genesis.

Haphazardly attempting to combine realistic scenarios with poorly executed arcade elements hasn’t traditionally gone over well with many games simply because they are on two very opposite ends of the gaming spectrum and 688 is no exception. For instance, a contemporary comparison would be like trying to combine elements of Wipeout with Forza. Both are exceptionally great games in their own right, but to discern any sort of synergy between the two would result in a mess of catastrophic proportions. 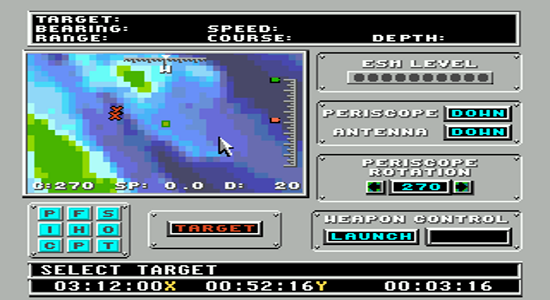 Thus, when I booted up 688 Sub Attack recently to get a grasp of whether or not it was as bad as I remember, it most certainly was. While the concept of being able to take control of either a Soviet or US submarine during circumstances that drip with cold war tension, this was clearly an experience that was best left on the PC. The game outright forces you to move between different stations such as navigation, weapons, communications, periscope, etc via a clunky slide movement that would seem more native to a keyboard and mouse user than someone with a gamepad.

Point for the PC, I suppose. But, this is just shoddy design on the part of designers John Ratcliff and Paul Grace. Now, I don’t know if it was directly up to them as to when or if the game would be ported from computers to consoles, but if they had any hand in it, they are partly responsible. Primarily because it was a forced experience that didn’t belong on any other system than the native system it was designed for and by pursuing that course of action, it only resulted in a terribly poor product.

Digressively, the game offers players the chance to take control of either a Soviet or US Submarine and without a doubt, this sounds really cool conceptually. The problem is, taking control of a Soviet sub means enduring everything that goes with it in the most simulative form possible. Sure, it controls the same and you can feel your way around for the most part, but when you try to figure out whether or not a button means “Fire” or “Disarm” in Russian, then it becomes a huge freaking problem. It ends up feeling disheartening as you look for your Russian to English dictionary and realize that there is something terrifying about those backward “E’s”, so you reset and switch over the to US and realize that it’s no better.

Sadly, that ends up being an understatement. I mean, if you’re coming off playing games like Sonic, Urban Strike or Mortal Kombat the action in 688 is going to just feel sluggish and irritating, which eventually just leads to you wanting to blow everything in sight up. After all, the mission description mentioned something about a convoy, but the game didn’t really compel you to pay attention, so you do what feels natural and start loading torpedoes. You hit the surface and decide that anything you can target is going to the bottom and sure enough to spot something on the horizon.

Lazily heading across the surface are a few ships so you start firing. After waiting a few agonizing moments, you see some white sprites that are meant to represent explosions and the ships begin drifting gently beneath the waves. You’re excited finally believing that playing this mess has finally paid off when the game cuts to a mission failed screen. 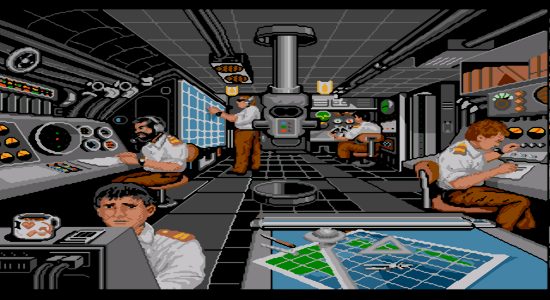 I’m not saying all simulation games are bad, but for a system like the Genesis, I suppose it merely just becomes a case of knowing your potential audience and whoever believed it was a great idea to bring 688 to the system just had no damn clue whatsoever.

If you have always wanted to see what a sim-type game might look like on the Genesis, then by all means, I can’t suggest this game enough for you – especially if you have a distinct love for naval warfare. But, for gamers who would rather use their console to play fun games, I would probably leave this one wherever you found it and keep sailing onward.

Since this isn’t one of those games I can look back on with a fond heart, I believe it’s time to put this one out to pasture and remove it from my collection. Bottom line, if I want to play a game that offers a situation akin to a realistic simulation on my terms, I have more than enough of an idea as to where I should be looking. But, the sad fact of the matter is one that should be integrated into the identity of the gaming community. Simply because you can port a game, doesn’t mean you should port a game. Because nine times out of ten, it’s going down in history as a wreck.