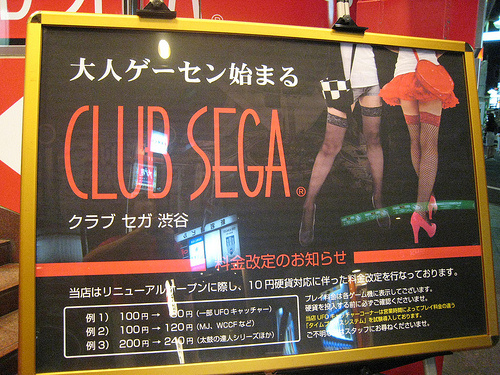 WELCOME TO 2011 GUYS! This year is going to be the exact same as 2010 but with a less cool number. But I bet you want to know what the Sega Addicts have been playing in the last week of 2010!

So, just in case you couldn’t carry on with your lives without knowing what we have been playing, here it is! Who knows, you might even learn something! No you won’t. You won’t learn anything. Hit the jump guys!

Stevie Grant- Writer of Top 10 Worst and Reviews of Games I Haven’t Played:
I got Vanquish for Christmas, so I’ve been playing Vanquish for new years. I be sliding!

Brett Hatfield- Community Manager and writer of Megadriving:
Mainly just my christmas haul. BlazBlue CS makes me so happy inside. I’m finally getting around to relearning normal mode commands, and I’m pretty boss already with Makoto (love that girl!) and Tsubaki, and I’m trying to learn Hazama and relearn Noel (spring raid pisses me off). In time, though, I think I’ll be able to at least give a couple of my friends a run for their money. NCAA 11 has been the only one of the football games I’ve played, thanks to Madden’s stupid system of making me import a NCAA draft class BEFORE starting a season… Incredible presentation on it, though, and the sight of West Virginia winning the national championship never gets old, no matter how many times I do it. And WWE Smackdown Vs. Raw 2011 is the best wrestling game I’ve played in YEARS. Aside from some animation issues, it’s a top notch game in every way.

Prinny 2 is fantastic fun. So glad they kept fixed-length jumping, because the rigid platforming controls actually helps emphasise the puzzle elements of each portion of the stage. Bosses are also damn challenging. Needs more control explanation though, as I 60 prinnies died before I figured out that you could use L/R to boost with the snow mobile in BREAK mode.

‘My Girlfriend is the President’ is actually getting a proper localisation, which is awesome news. Sadly, that also means it wont be out at all as soon as I hoped, so new VN is Aien no Ascelia, which is really good. It’s actually the PC port of the PS2 version, which means I’m doing this in the utter reverse of how I experienced Utawarerumono and Tears to Tiara, which is great-OH! Also picked up Phantasy Star Portable 2 in the sale, and it’s bloody brilliant. Pretty much fixes everything I had an issue with in PSU, like the synthesis boards, the online community, the balancing (Now there are only four-man parties, so you don’t have six-man teams utterly destroying bosses anymore). The drop rates are also generous, and there’s loads of awesome go fun times having.

Also thinking about playing Yakuza 3 from the beginning in the side-quest only mode to see how it is, but there’s still too much on my plate. One day maybe.

Josh Newey – Writer of With Great Power Comes Great Games and Underappreciated Gems:
I’ve been playing my fingers to the nub with Red Faction: Guerrilla. The open world genre has been losing my interest ever since the days of San Andreas, but Guerilla’s revolution theme and incredibly fun demolition mechanics have me utterly addicted. I just hope they fix those awful spans of open space before the sequel.

Other than that, a whole lotta nothin’. Nothin’: Worst Game of ’10.

Pat Reddick- Community Manager/ Writer of Forum News and Not-so Classics:
I’ve been playing mostly games from the Humble Indie Bundle still. I played a lot of Braid, Gish, Machinarium, and Penumbra Overture. I tried to play some Aquaria but I couldn’t really figure out what was going on. It’s kind of like Ecco the Dolphin meets the Legend of Zelda, which I guess would be equivalent to rubbing shit on something good. I’ve also played the first few hours of Dragon Quest 9 and it is incredible. I never thought I would be able to play a traditional JRPG again, but I was proved wrong.

Andrew Galbraith- Writer of Contemporary Alternatives and Miscoded Confidence:
This week it’s been more Dead Space with a lot of Mass Effect 2 and ilomilo in the interim. As far as World of Warcraft, Cataclysm is nice and all, but I felt it time to let my account lapse a bit and spent some time and energy on a few other projects. Namely beating Infinity Blade another several times on my iPad in between trying to get my hapless goddamn family to the end of Oregon Trail on my iPhone without another one of the kids being snatched by a Giant Eagle. Happy New Years Addicts!

Tom Kyzivat- Artist and Podcast Co-host:
Happy New Year, Sega maniacs! We went to GameWorks for New Year’s Eve and I got to try out Tatsunoku vs. Capcom, which was pretty cool. I also got my ass totally handed to me in King of Fighters 12–couldn’t even beat the first set. Um, because the controller was whack, not because I was whack. Word. Yeah. Anyway, I also played skee-ball and Sonic air hockey, which was only Sonic-related in that it had a large print of Sonic on the board and some annoying sound effects. I hate to admit it, but I also played Mario Kart, which is probably sacriligious. Back home we had a rousing bout of Power Stone 2 on the trusty ol’ Dreamcast and then Hydro Thunder Hurricane and Scott Pilgrim on Xbox.

Kris Knigge- Reviewer and Podcast Co-host:
It’s rare for me, but much like Alex S, I’ve been playing a couple of VNs lately.
First and foremost is 999 which is my pick for DS game of 2010. It’s very well-written and the puzzles feel really organic. I highly recommend it to anyone who can enjoy scrolling through lots of text.

Also, I’ve been Playing Higurashi episode 3 on iPhone. It’s much better than the second, although the art is still abysmal.

On the “games with gameplay” front, I’ve been playing a lot of Super Street Fighter IV with my friends, and I feel like I’m slowly getting better at it, which greatly pleases me. Naturally, I’ve also been playing a couple Sega games my family sent my way for Christmas: Super Monkey Ball Banana Blitz (in a Step & Roll case) and Sega Superstars Tennis. Both make me sad that not enough people make colorful and good-looking games for the Wii.

Speaking of colorful and good-looking, did you know that the 360 actually has some good JRPGs? I’ve been enjoying Tales of Vesperia quite a bit, and Lost Odyssey will also be demanding my attention shortly.

Alex Riggen- Editor in Chief and Podcast Host:
Played through Silent Hill: Shattered Memories on the Wii as I got it as a Christmas gift from my sisters. Almost the entire thing was amazing and I could not put it down. Exploring Silent Hill with your trusty flashlight was a blast and I really liked the fact that I didn’t have to worry about enemies as often as in the main games. The nightmare segments that did have enemies were a little frustrating but overall this is one of my favorite Silent Hill games and I’d love to see Climax make another.

I’ve also started playing Far Cry 2 and enjoying every minute of it. The world is incredibly well designed and engaging and the multiple ways you can approach everything you do is impressive. Just getting from point A to point B on the map involves some planning and critical thinking and like the Fallout games it feels like you’re experience with the game is complete unique from everyone else’s experience.

And that was 2010! The year of the Sega Addicts! Now before you start jumping with you I want you to leave a comment about what you’ve been playing. That would be lovely.

The Sega Addicts writers are recording tomorrow with VBlank Entertainment!