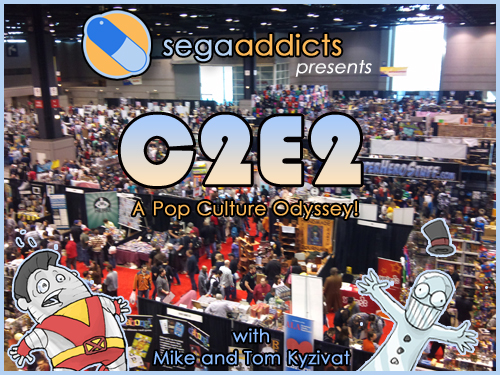 Don't we look adorable in our costumes?

How are all you SEGA Addicts out there, have you got the shakes yet, due to our hiatus?  This is Mike Kyzivat here, using Tom’s account (shh!! don’t tell him) because my account doesn’t have all these fancy do dads like posting stuff and adding pictures.  Hey what’s this button do?  oops, OH CRAP!!!!… you guys didn’t need podcast episodes 1 – 15 did you?  Well anyway I’ve got a little something for ya, a firsthand report of C2E2 at McCormick place in Chicago.  Yeah I know it was almost 2 weeks ago, but that gallon of ice cream wasn’t going to finish itself (*burp*!!)  All bad joking aside, C2E2 is basically Comic Con’s baby brother, and while there wasn’t much SEGA related material there, it’s worth talking about because the worlds of Comics, Toys, movies, videogames, and cos- playing are all pretty interconnected.

As you can see from the above picture there was no shortage of people walking the floor and clogging up the booths.  A lot of booths featured games to entice people to stop and spend some time at their booth.  West wood college of visual arts had not one, but two copies of Marvel vs. Capcom 3 set up on either side of their booth.  T-mobile, not to be out done, featured…Super Street Fighter 4?!  Way to be current T mobile (at least it was super…).  Across from the main room was a space set aside for table top gaming and super over priced pizza and drinks.  10 dollars for a slice of pizza and an iced tea?  No thanks I’ll just eat my foot instead.  To the left of that nonsense and around the corner was a console gaming room with demos and full games.  The new Arkham City was there, Marvel vs. Capcom 3, and several copies each of Black Ops and Halo: Reach. 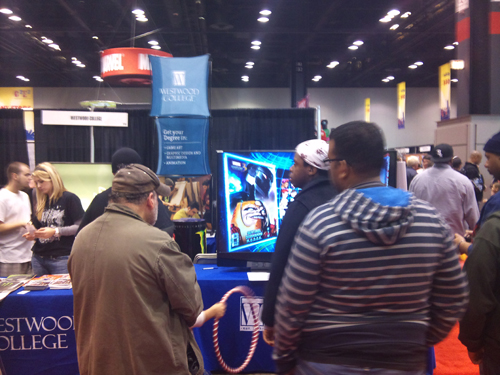 Westwood had Marvel Vs. Capcom 3!!! 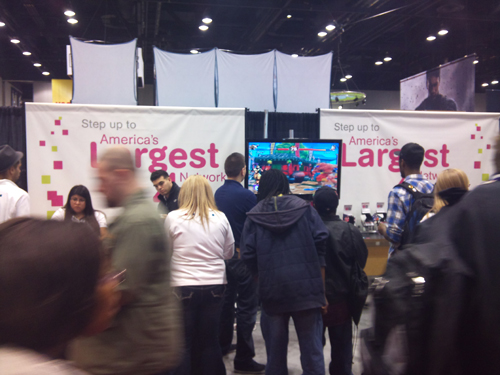 T-Mobie had Super Street Fighter 4?! way to stay current, just like their new commercials that are basically the mac vs. PC commercials from 4 years ago. Atleast those had a vs. in it. 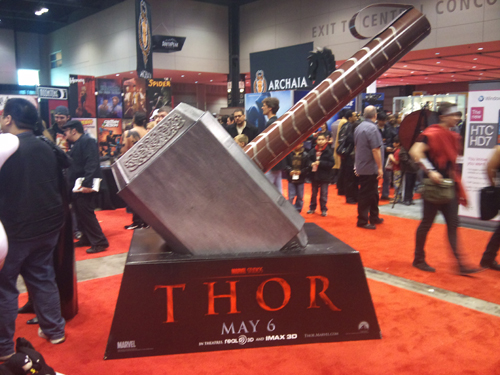 I bet even THOR couldn't lift that!!...what...it's made of cardboard?...nevermind.

Speaking of Videogames the Marvel booth had one of the few SEGA related things at C2E2. It’s a demo of the upcoming THOR videogame.  I played quite a bit of the demo and 1st impressions are pretty good.  The game plays basically like a God of War game, but with the flavor of THOR’s powers and abilities.  You have your weak and strong attacks that can be used in different combinations for different melee moves; you have a button to throw your hammer at hapless enemies, a standard jump button, and a selection of 3 different kinds of magic.  The game went easy on you as you were basically in god mode the whole time; you had full magic and life at all times. 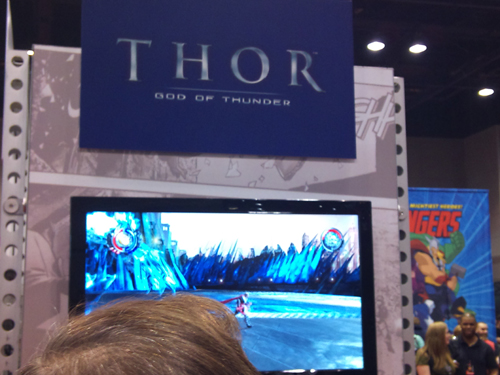 The top of the demo kiosk. what? they can't all be clever captions...

The magic were kind of fun to play around with; you have thunder, whirlwind, and a sort of thunder/earthquake magic.  Each one can be used in two ways:  you can tap the button for a quick blast of wind, a quick bolt of lightning, or a small tremor in front of you.  Or you can hold down the button and THOR will hover over the ground and when you release the button a giant whirlwind engulfs THOR and spins enemies around before throwing them around.  The thunder/earthquake magic sends chunks of earth up into the air in a bullet time slow mo sequence before bringing them crashing down on the opponents, and the lighting magic sends a giant bolt of lightning down on THOR while smaller bolts come down around him.  The cool thing about the whirlwind and lighting magic is that you can still control and direct THOR while he does these massive attacks.   It was especially fun with the whirlwind magic because you could chase the smaller enemies and get them caught in the storm only to be sent flying after the tornado had its way with them. 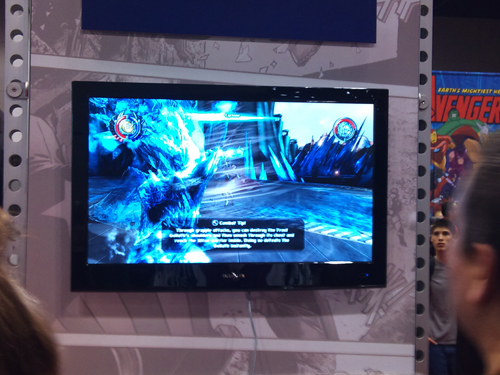 Press left, LEFT!!! no your other Left!! oh just give me the controller I'll do it.

The part of the demo I played the most was a mini boss battle between one of the frost giants minions.  I fought some smaller minions before a larger much more powerful enemy came out.  This is where it switched to a small cut scene that was pretty cool.  As the larger mostly human frost giant came walking towards me the Ice that was left over from battling the smaller enemies started to gravitate toward the giant and attach itself like armor, so that by the time he reached me he was even bigger and monstrous then before.  It is very cinematic.  Now the beatings begin, you can pound on the ice giant until he finally slumps over and you can use the grab button to climb onto his chest and then move left or right into order to rip his arms off.  Or you can simply continue to attack his ankles until the giant falls into pieces on the floor. 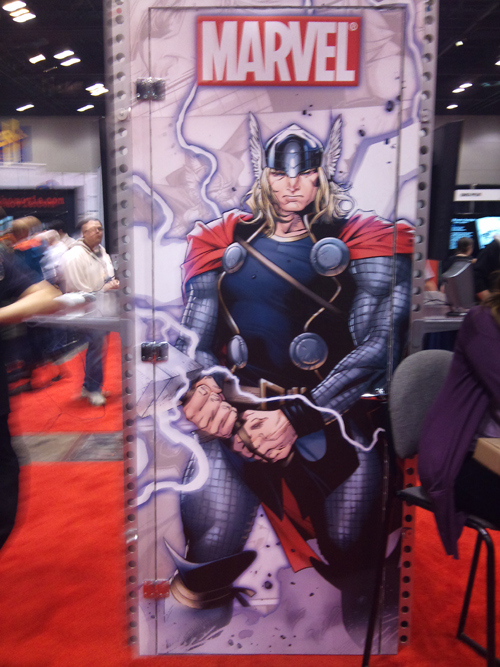 The side of the kiosk is pretty cool too.

The only criticisms I can level at the game right now is that the combat is good but not great, from what I played if that is all the moves there is and magic there is it could potentially get boring after a while, but I’m hoping that was just a sampling of the moves available.  The graphics were pretty good as well, not spectacular, but they had a good amount of detail on the characters and the designs for the environments were cool as well.

As far as SEGA related cosplaying there was not much, there was a girl wearing one of those sonic spine hats that come with a Sonic Colors pre order.  As far as full fledged costumes the only one that I found was a girl in an awesome Ulala costume from Space Channel 5 (see below).  There were of course many Jokers and Harley Quinns.  A few Marios, I wish I could have gotten more cosplay pics, but it was so crowded it was hard to get a good shot.  But I got pics of some of the better super fans so enjoy!!!

Whoa, there, mister Michael—aren’t you forgetting something?  Tom Kyzivat here, true believers!  I was lucky enough to attend the C2E2 show as well, and I’m afraid there’s a glaring omission from this account: our own Mike Kyzivat placed second in a Marvel vs. Capcom 3 tournament at the show!  He stomped many a mudhole, but unfortunately a sassy young competitor with a very cheap team came out on top.  So, I think we should all make a big deal out of Mike getting second, because it was quite a feat—there were a lot of contestants and a lot of them were pretty good.  He’s also a good sport because the tournament took almost the entire day!  So, well done, Mike!  You did all Sega Addicts everywhere proud.

I also enjoyed the show, taking in all the cool costumes, shops (there were a LOT of them) and artist booths.  What a time we had!  I even got a sneak peak at the Batman: Arkham Asylum action figures coming out this summer.  Take a look at Mike’s photos to see for yourself, but they are looking pretty dang sweet!

Well, it seems like Mike’s covered everything else, so, from the both of us, we bid C2E2 a fond farewell!  If you live in the Chicago area, I would recommend checking the show out next year.  Definitely a good time!  Francis P. Tassium was very disappointed that he couldn’t go, but he had jury duty.  Life’s a bitch sometimes.

And now back to the cos-playing… 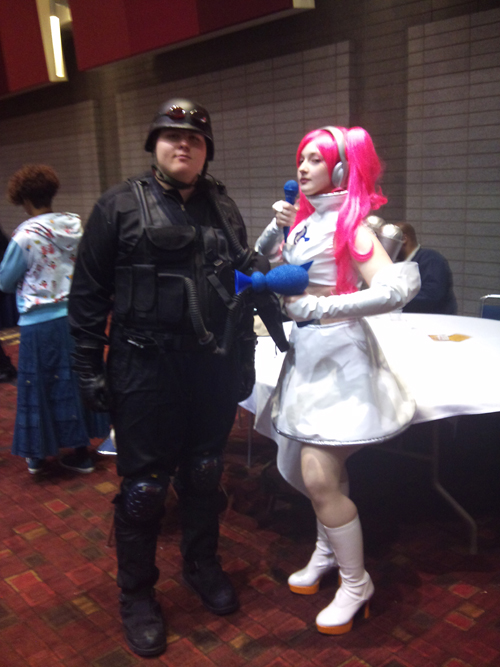 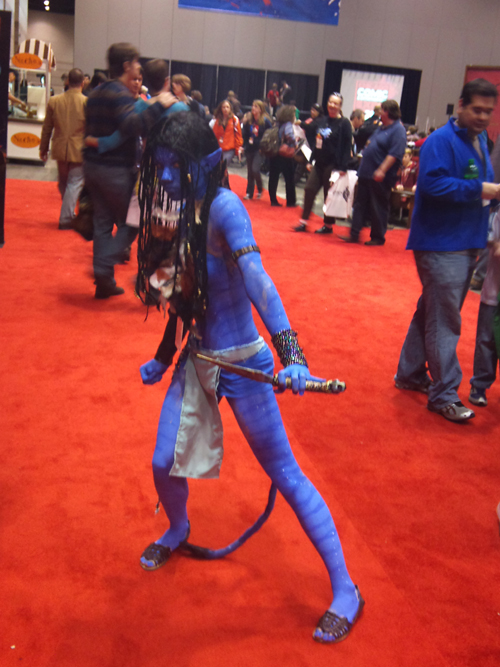 Watch out I think that smurf is feral. 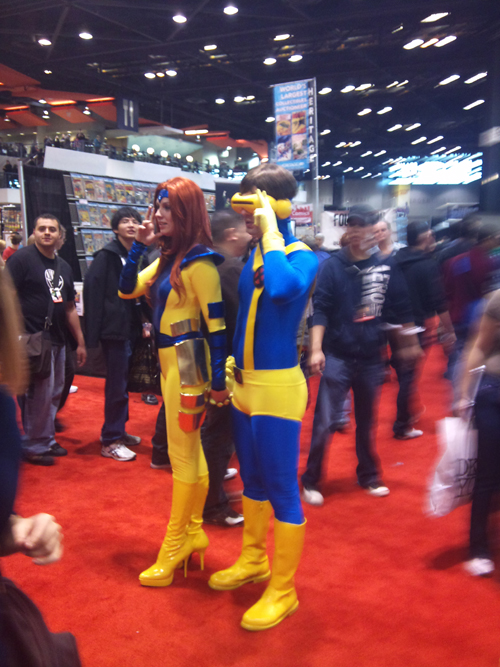 Quick Jean turn into Dark Phoenix and do something about this crowd. 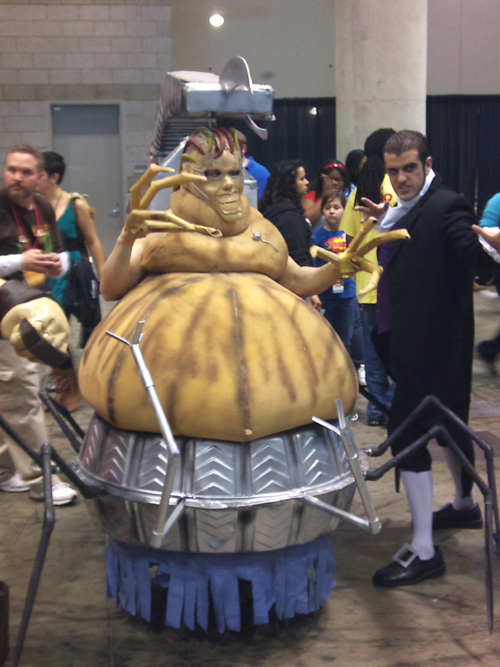 Even Rosie O'Donnell made an appearance!!! And it looks like she lost some weight. 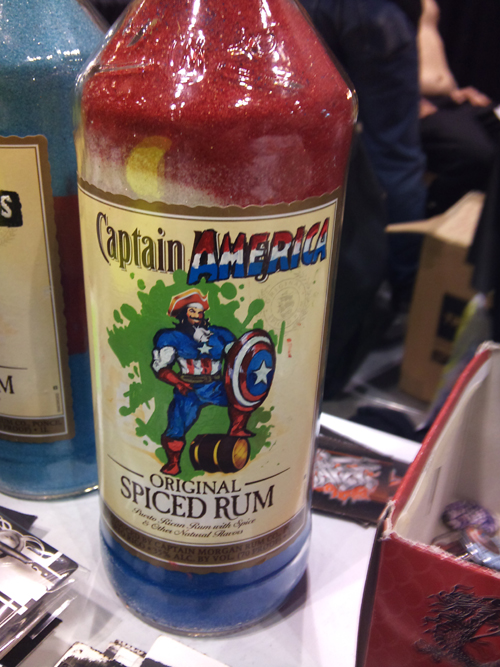 Wow the merchadise for the new Captain America movie is getting crazy! 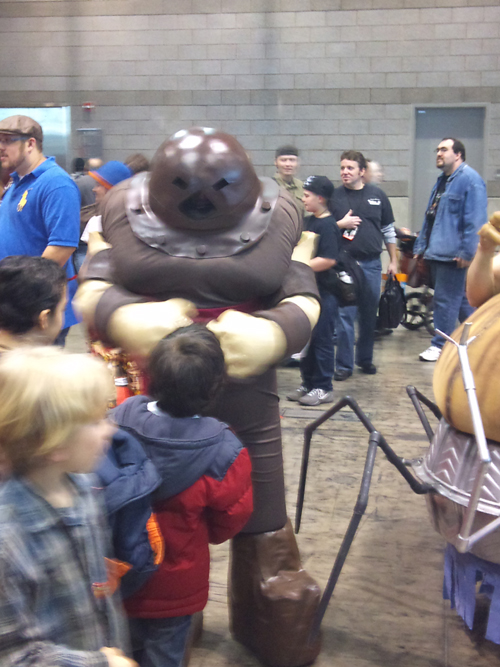 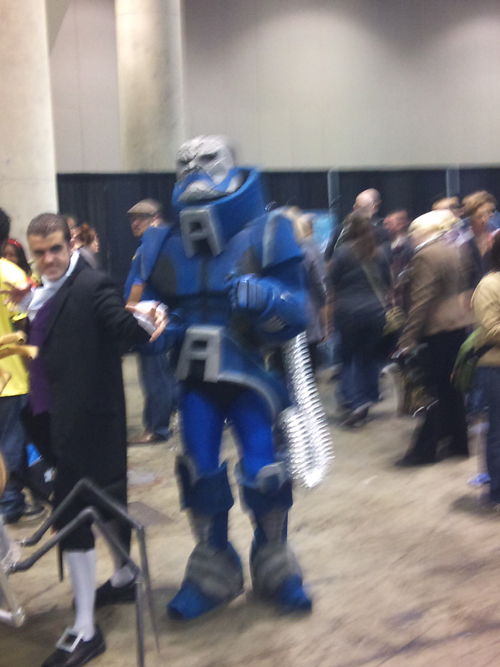 Outta the way vamps, no one is here to take pics of you!!