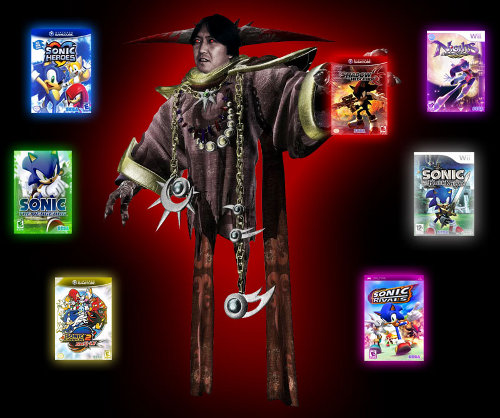 Hello and welcome to the thing which you should know how it works by now. Hit the jump to read what we’ve been playing and all that business.

Stevie Grant- Writer of Top 10 Worst and Boss Attack:
I haven’t played much. I guess I started Sam and Max: The Devils Playhouse episode 1 which is definitely a step up from the other series in presentation. Other than that, and Portal 2, not much. Portal 2 is amazing by the way and if you haven’t played it yet then what are you doing with your life? Go play it now and I’ll talk to you next week.

Alexander Sargeant- Writer of Retro Reviews:
Magicka! Which is awesome coop fun despite the insane amount of troubleshooting I had to do to get it working, including, but not limited to, not opening a fridge in-game to prevent a crash to desktop.

Bangai-O Missile Fury, which I’m so very infuriatingly close to finishing. Mission 47 is immense. It actually reminds me of Earth Defense Force 2017 for some reason. I guess that’s just the giant ants. Review tomorrow, most likely.

Mushihime-sama Futari, with the Black Label DLC. Incredibly good fun, and one of the few Cave shooters I can actually play well on the regular unarranged modes. SO PRETTY.

I would mention ‘Red Johnson Chronicles’, but since PSN is down I can’t download it even having bought it. Also Mortal Kombat has ridiculous difficulty issues. Again, if you have five settings, then on easiest one I should win against the AI 100% of the time. I shouldn’t be beaten up by Scorpion reliably dealing 5-hit combos for 24% damage.

Josh Newey – Writer of With Great Power Comes Great Games and Underappreciated Gems:
I’ve been playing a bunch more Conduit 2 multiplayer, which surprises me a lot. I’m not usually one to get hooked on an FPS, let alone one as small time as Conduit 2, but something in this multiplayer catches my fancy. I also started up a new game of the first Conduit, just to get a fresh comparison in my mind of the two. I’d forgotten just how much more attention was put into the first game’s presentation. Even with the boring exposition, the feel of the game is just much more bombastic, with a campaign that just sticks in the mind a lot longer.

Finally, I snagged Mortal Kombat for a measly 40 bucks on Amazon this week, and I’ve been playing that nonstop for the last three days. Alex S is so right on the difficulty thing. The game all of a sudden decides that it’s not cool with you winning so much, then starts inundating you with two-on-one matches that take an hour to pass. Even with this difficulty, I am in love with the new MK. It’s a pitch-perfect tribute to the games of old, except this one actually has good gameplay.

John Doherty- Writer of Take Cover:
This week I had my yearly “replay Half-life 2 and it’s episodes” event. I really love the game and even though I’ve played it numerous times it still feels fresh. I also just want to say publicly that I [heart] Alyx Vance. She is an amazing character to me. Mostly because she is a strong female who isn’t sexualized. She is portrayed as a human and not a sex object. /end rant.

Brett Hatfield- Community Manager and Writer of Megadriving:
As I think I mentioned on the now-dead (WHY.) forums, I picked up Dragonball Raging Blast 2 for four bucks thanks to a gift credit I had from preordering NASCAR 2011. Fun game really. Far better than the first RB. And that’s not just because Videl is actually unlocked from the start this time instead of having to jump through hoops to get her. Galaxy Mode is way better than the story mode offerings of the past, just because it lets you fight without all the exposition you’ve heard a million times. Combo system’s better this time around as well, and I love the new art style they adapted as well. Only real issue for me is that some of the challenges are just flat out cheap.

Well unfortunately we now know why the forums are dead. And that’s the saddest story ever told.

Kris Knigge- Reviewer and Podcast Co-host:
Mortal Kombat. It is a game. I’m sure I’d like it better if I had people to play with or PSN weren’t down. That said, the story mode is pretty neat.

I also replayed some of Rockman X4, which I still love very much. I think it might be my second favorite X game, despite the fact that Zero isn’t quite as fun to control in this one as he is in X5, and X is pretty much an afterthought, story-wise.

Unfortunately, for the most part, I’ve been kind of swamped lately, so I haven’t been playing much these last few weeks.

Tom Kyzivat- Artist and Podcast Co-host:
Went back to Marvel vs Capcom 3 this week, to help Mike train for a tournament that ended up being cancelled because he was the only contestant to show up. LAME. He’s got a Mortal Kombat tourney this coming weekend, assuming anybody shows up this time.
I also started and finished Limbo, and I know at this point it’s totally cliché to praise this game, but it is seriously one of my favorite games of all time. I won’t go into why I liked it so much, because it’s all been said already, and no words could possibly express how badass this game is. I want to crawl inside it and live there forever. I want to carry on its tradition through Viking-like songs and tales to be handed down to bards of coming generations. I want to roller-blade to Denmark to French kiss (with tongue) the guys who made it. Yeah. I like this game.

Alex Riggen- Editor in Chief and Podcast Host:
I have been playing Uncharted 2. As most people probably already know its incredibly good and many of the faults I had with the first one have been fixed. The environments are no longer a little repetitive and the combat has been greatly improved. I’m right at the end of the game now so its that time to start thinking about what I’m going to play next. Probably nothing to substantial as I’m looking forward to picking up LA Noire on the 17th.

And that’s it for this week guys! I hope you enjoyed it and I’ll see you next week where I will not have played much since I’m swamped with university work. Or will I be? Tune in next week to find out! Gotcha there haven’t I? Unless you don’t care which you probably don’t. Either way post in the comment what you played or I’ll kill myself or something. Laters!

The Sega Addicts community is creating a game and YOU can help!