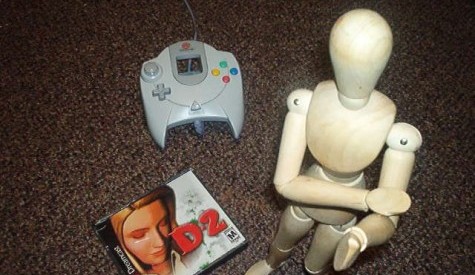 I’m not in the habit of posting silly eBay auctions as news, but this guy just deserves some credit for his ridiculous gall.  I’ve been considering posting about this for months now, but I wasn’t sure if it was really news-worthy.  But what the hell.  It’s not every day I get to write a news post about something pertaining to Illbleed.  I’d better savor it.

Remember the bit in Illbleed where Eriko is transformed into a wooden puppet? Well, for a mere $179, you yes YOU can own the amazing Eriko Wood Puppet from the rare and under-appreciated Dreamcast title!  The eBay post is just a series of images describing the seller’s short history with a generic wooden frame. This includes scenes of the doll reading The Diary of Anne Frank, playing the Dreamcast, listening to an old CD player, and trashing the seller’s room.  It’s a cute and clever little ploy, so check out the auction for a little bit of silly eBay entertainment.  I’m just astounded that this guy is trying to get someone to give him almost two hundred big ones for a generic artist’s human figure model that you can find at Michael’s for a mere five bucks.

I guess I can’t really I blame him, though.  People pay for some stupid stuff on eBay.