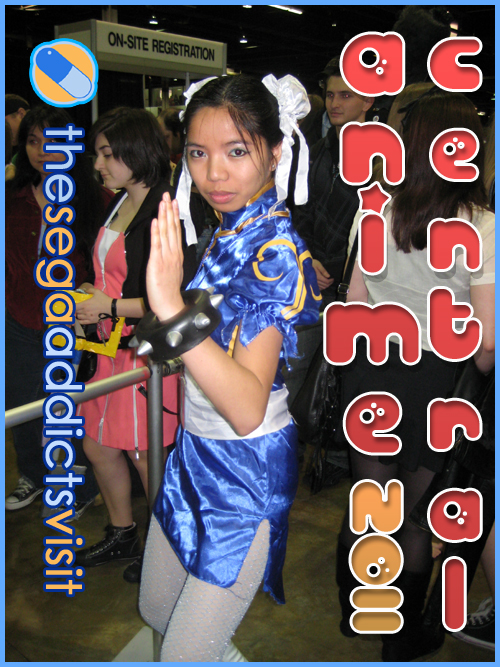 Nerds, geeks, otaku–lend me your ears, and I will regale you with stories from the Midwest’s largest anime convention: Anime Central!

Two of the handsomest Sega Addicts, Mike and Tom Kyzivat, were lucky enough to attend the convention this year, to represent everybody’s favorite Sega-themed podcast.  Well, it’s our favorite Sega-themed podcast, anyway.  Anime Central (or “ACen”, as the kids say), took place this last weekend of May 20-22, so we attended on Saturday.  It is the coming together of all things anime, manga, video games, movies, and everything in between.

Let’s start with the important stuff: video games!  ACen had a full arcade, sporting such classics as Marvel vs Capcom 2, Dance Dance Revolution, Soul Caliber III, and of course my specialty: Skee-Ball!  The arcade was cool, but the real attraction was the free play room, which had a swanky set-up of probably fifty TVs hooked up with all manner of video game consoles from the ages, including an Atari 2600!  The games represented all genres from Mortal Kombat Trilogy to Mega Man X to Fatal Fury 3.  Of course it was packed, but I did manage to get a couple games in: Superman and Combat on the trusty ol’ Atari (why society ever thought we needed to move on from two-bit graphics, I’ll never know) and Battletoads on the NES.  Yes, I know, disgraceful for a Sega Addict, but the Genesis set up with Sonic 2 was totally being hogged.  And, just to remind me exactly why society moved on from two-bit graphics, they also had several flatscreens set up with Marvel vs Capcom 3.  Mike entered their tournament, fought well, but in the end did not win.  A moment of silence.

They also had a partitioned area of the game room with Halo set up on projection screens, complete with theater seating.  NICE.  Of course I didn’t want to wait around for twelve years to play, so unfortunately I was a spectator only. 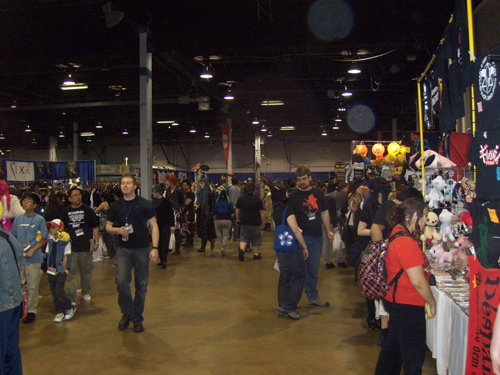 The show floor--crawling with fans and geeks. We felt right at home!

Even though the convention’s main attraction is anime, there was video game goodness to be found all over!  As press, Mike and I were able to attend press conferences with such voice acting talent as Colleen Clinkenbeard (see photo) and Cristina Beard.  Both Colleen and Cristina have extensive experience with video game voice acting, including such credits as Borderlands, Aeon Flux, Blood Rayne II, Guitar Hero III, and BlazBlue, Hyper Dimension Neptunia, Dynasty Warriors, respectively.  For any readers interested in voice acting for video games, we asked Colleen how it differs working on video games as opposed to anime.  She said that video game voice acting provides much more freedom to approach the character how you want, and the directors are much easier to work with.  Keep that in mind, kids! 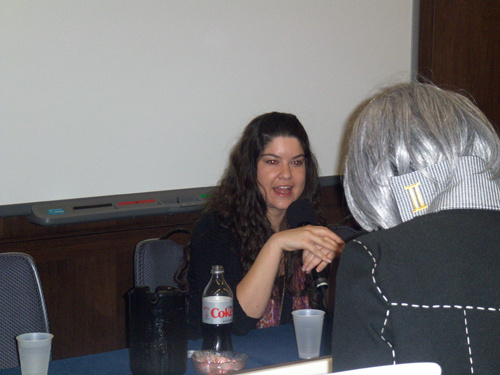 And of course, throughout the convention, we saw a myriad of video game costumes, from Devil May Cry’s Dante to a Bioshock Big Daddy.  Check out some of Mike’s photos in his forthcoming cosplay article to see the kind of craziness those cosplaying kooks had cookin’.  Surprisingly enough, we didn’t see any Bayonettas, which would have been a great Sega Addicts photo op.  And of course, the non-video game costume were most impressive as well!  The majority of the anime characters went right over my head, but I did manage to recognize a few. 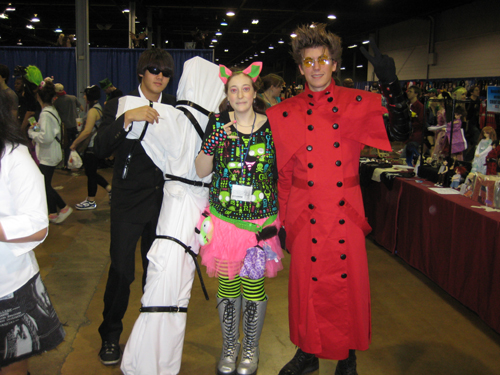 Our sister, Katie, with her new husbands Wolfwood and Vash.

As far as non-video game-related shenanigans, ACen hosted an enormous convention hall full of very talented anime and comic artists, selling their wares and shooting the breeze with the nerdy masses.  There were also vendors a’plenty, selling your typical anime fare from action figures to body pillows (ew…), as well as some more eclectic products like Steampunk clothing and accessories, comic books, death metal clothing and jewelry and gas masks.  Whatever you were looking for, chances are you’d find it there!

The show floors were open until 7:00pm, but the convention itself was open 24 hours.  They held several dances and raves for the late-night jitterbugs, and the hotel restaurants stayed open late to accommodate the hungry ravers.  The line for the rave was a bit long for us, so we hung out in the three-story hotel lobby for the rest of the night, taking in the costumes and watching an impromptu break dance battle go down. 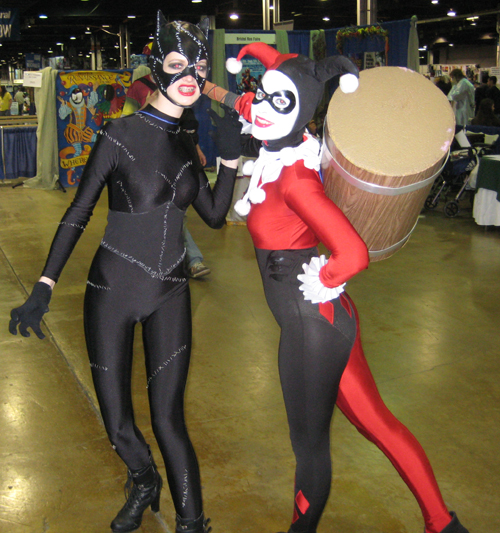 Even Mario would be jealous of that mallet... remember? 'Cause in Donkey Kong he had a... ah, forget it.

Overall we had a blast!  In comparison to some of the other conventions I’ve been to, it did seem different.  Whereas C2E2 and ComicCon felt a bit more like they were about the art and the culture behind the material, ACen was more of an anime-flavored party.  As such, the late night portion of the convention was a bit more prone to party shenanigans—many people were “taken with the spirits”, but it was nothing you probably wouldn’t see at your average concert.  Still, that’s something to keep in mind if you plan on sticking around past the main convention hall hours.  Of course that’s not to say that ACen didn’t have proper security and staff to handle all that skullduggery, and all event staff were friendly and helpful.  On their part, everything was expertly done and very professional. 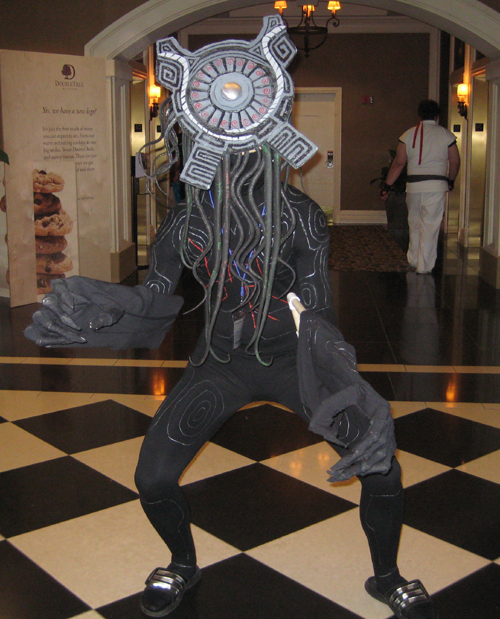 I have no idea what this is, but I WANT ONE!

So, as the sun started to rise, we bid a fond farewell to the largest anime convention in the Midwest.  Thanks for the memories, ACen!  And thanks for letting the Sega Addicts tag along for the ride.

Anime Central: where a princess and a ninja can settle their differences with a game of Tekken 6. 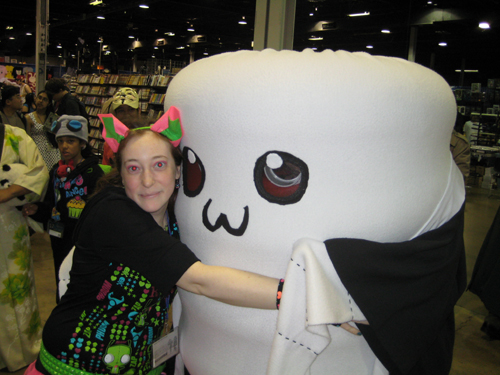 "Well, I guess I've seen everything now, except for maybe Katie hugging a giant roll of toilet paper--WHAAAAA????"

It's like the RPG but without the gameplay: Hyperdimension Neptunia anime series confirmed

See all 100 Sega Addicts episode headers at once!