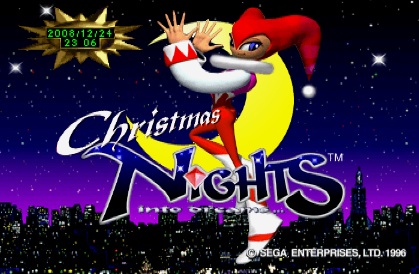 Christmas Nights into Dreams is a “sampler disc” that SEGA released to select stores, bundled with certain magazines, Sega Saturn consoles, or Sega Saturn games in December of 1996.  I stumbled across my copy at a local BlockBuster Video for $5.00 and it may have been the best $5 purchase from a rental store in my history as a gamer.  I was a Nights into Dreams fan before buying this holiday demo, but this is the only demo disc I play every year as a tradition.  Allow me to share with you why this game is filled with such Christmas magic. *Cue the Whoville Medley from “How The Grinch Stole Christmas.”*

The story of Christmas Nights into Dreams follows our main heroine and hero Claris and Elliot while they are out in the hustle and bustle of Christmas shopping. While avoiding Wal-Mart stampedes and door-buster sales, the two of them notice something missing: the Christmas Star on the top of the tree in the middle of the city.  With the help of Nights, Claris and Elliot must find the Christmas Star for the sake of the holiday.

Christmas Nights into Dreams is composed of two stages that take place on the same level, Spring Valley.  In the original version of Nights into Dreams, Spring Valley was only available in Claris’ dream, so it’s nice to have Elliot go through a level that was previously unavailable to him.  Claris and Elliot have different items scattered through out their varying paths to add diversity to the stages.  Christmas Nights takes absolutely every little thing from the original level of Spring Valley and gives it a seasonal touch.  Everything in the game is snow covered, while the snow continues to lightly fall.  Nights himself is dressed in a red jester outfit with one white pom-pom at the end of each stem of his hat.  Nightopians are dressed as elves, and every enemy Nightmaren is redressed with a red and white color scheme.  The captured Ideya’s are placed underneath Christmas Trees as opposed to the jellyfish-type trap from the original game.  At the beginning of the stage, Nights is caged on top of a Christmas cake (perhaps a fruit cake?), while each collected Ideya lights a corresponding candle before Christmas Nights can be freed completely. 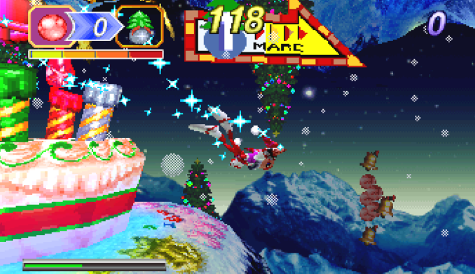 Fly away from the fruit cake!

The Christmas theme of the game is captured beautifully with the music as well.  A remixed jazz version of “Joy to the World” plays on the title screen while a much more upbeat “Jingle Bells” chimes away when players are flying through the stages in the game.  Any fan of Nights into Dreams knows that the music stands out with one of the more memorable video game soundtracks, and Sega knew how to recognize this with an unlockable Karaoke mode.

It's a blue, blue Christmas

Sonic the Hedgehog into Dreams replaces Nights with Sonic, who instead of flying through levels actually runs and follows an arrow to collect spheres before placing them in each Ideya.  After collecting all the Ideya, Sonic faces a revamped version of Puffy, which is basically a balloon version of Dr. Robotnik.  During this boss fight, a remixed version of “Final Fever” from the European and Japanese version of Sonic CD plays in the background. 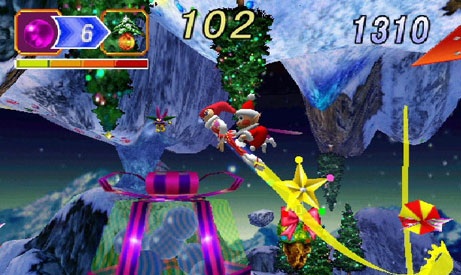 This screenshot is taken from the PS2 port, which includes Christmas Nights. If anyone reading this owns said port, please mail it to me.

Christmas Nights into Dreams also has a bevy of time-sensitive treats thanks to the Sega Saturn’s internal clock.  Playing the game any time outside of the winter months allows for a grassy green Spring Valley.  Playing on December 25th provides a Santa Claus cameo in the game, while switching the date to January 1st replaces the falling snow with confetti for New Years Day and a “Happy New Year” message on the title screen.  Playing on April 1st (April Fools), allows one to play as Nights’ nemesis Reala, while playing on February 14th replaces the falling snow with hearts.  Changing the hourly time of day also edits the background with anything from a lunar eclipse to aurora borealis.  Simply put, this game has a lot of gifts for all the good little boys and girls. 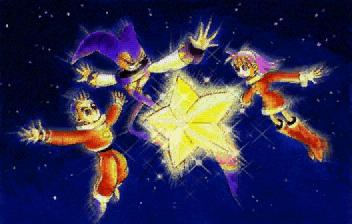 So warm and full of gasses, which is probably how they are flying

Overall, Christmas Nights into Dreams is just as fun as the original Nights into Dreams.  This demo disc is definitely for the fans of Nights, but could be an amazing introduction to the series for anyone else.  If you own a Sega Saturn 3D Controller and have already mastered Nights, then perhaps its time to scour eBay and treat yourself this Christmas.  For those of you who already own this timely sampler disc, I welcome you to share in my nostalgic tradition for a few rounds of Link Attack while sitting by the cozy fire with cookies and milk in tow.

The Sega Addicts Top 10 Games with Similarities to Panzer Dragoon