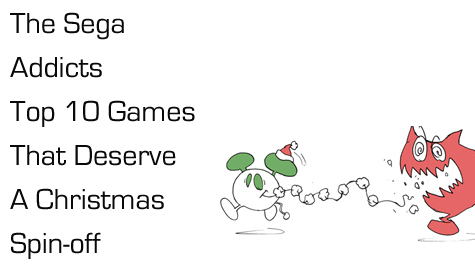 Tomorrow’s Christmas and what better way is there to celebrate than a Christmas themed Sega Addicts feature?

In the past, Sega has released several Christmas themed spin-offs to their popular franchises. Christmas NiGHTS is one of the most popular and a game that is remembered fondly by Sega fans all-over. With that in mind we feel that it’s time for Sega to continue with the tradition and make some new Christmas spin-offs for another generation of Sega fans.

Hit the jump to see our top 10 nominations for Sega games that deserve a Christmas spin-off.

Josh Newey: In this holiday romp based on the classic 2D platformer, our stretchy armed hero finds himself scaling a lush, towering Christmas tree, Shadow of the Colossus-style, in a quest to become the ultimate top-of-the-tree star. Along the way, Ristar battles wave after wave of Christmas tree ornaments all bent on stealing the coveted position for themselves. Each stage would be themed after a particular type of Christmas tree ornament, and Ristar would we forced to use their broken shards as his own tools of destruction. In one stage, the title hero swings from stale popcorn strings traversing through sticky tree sap and broken branches. In another, he sifts through a graveyard of broken bulbs and corny porcelain Garfield-themed ornaments as he tries to avoid falling into tangled masses of tacky tinsel. Also hidden within each stage are switches that Ristar must pull to activate that particular area’s string of Christmas tree lights. If he finishes the entire game and misses one or two strings, the tree will not be fully lit at the very end of the game. The closer Ristar gets to the top of the tree, the shorter the stages become, and the more the title hero must worry about falling off the precarious edge. Can Ristar reach the top and retake his throne as the king of Christmas ornaments? Or will an evil ornament king (themed after Garfield, of course) take control of the sacred holiday tradition?

Tom Kyzivat: Anyone who’s played Eternal Champions: Challenge From the Dark Side knows that the developers went balls-out with hidden characters.  Some of them were intended to be humorous, especially the Senator, a spoof on Joseph Lieberman for cracking down on video game violence.  With that in mind, how effin’ cool would it be to have Santa Claus as a hidden character in Eternal Champions?  I submit that it would be very effin’ cool.  If the occasion arose for Eternal Champions to have a Christmas spin-off, I say the coolest way to do it would be the same game, but with the jolly ol’ elf as a cut-throat unlockable character.  Think of all the special moves he could have!  A sleigh charge, a sack beating, candy cane shivs, toy soldier legions, all leading up to his Vendetta (Fatality): Rudolph’s Revenge!  And they’d be able to get creative with his level–I’d imagine the North Pole, where stage fatalities could include a mauling by a polar bear, an avalanche, or being torn apart by a mob of disgruntled elves.  Who wouldn’t want to see Santa kicking all kinds of ass?  I think it could be a new Christmas family tradition.

Scott Morrison: The chu’s would dress up as reindeer to guide Santa’s sleigh to chimneys instead of rockets.  Levels would be snow covered, and some of them may have icy spots in which a “jump” button would be incorporated while watching the path of the Chu-deer.  The cats would be replaced with a mix of reindeer predators such as wolves or bears.  Bonus levels will include open boards in which children run along the screen waiting for you to deliver gifts while avoiding bears at the same time.

John Doherty: Badworld takes place in the year 2020. One year Santa notices that everyone on Earth has been very naughty. This puts him into a fit of rage and he decides to show everyone why being naughty, isn’t very nice. The game will retain the same visual style of Madworld with one small exception, instead of playing Jack you play as Santa! Unlock powerful weapons such as Icicle Shanks, Yuletide Logs wrapped in barbed wire, explosive Fruit Cakes, Argyle Sweaters lined with razor blades and so much more! Santa may also compete in Christmas Bloodbath Challenges. Things like Feeding the Reindeer, where he wraps his enemies in Reindeer food and feeds them to his Reindeer who haven’t eaten in months. Another is The Wrapper, which will forcibly wrap someone’s body around a Christmas gift. Or finally The Snowman which takes three people, wraps them into tight individual balls, and stacks them on top of each other.

This Christmas Santa is decking the halls, in blood.

Alex Riggen: Instead of a small spin-off game, the Christmas themed Condemned is a full sequel to the series and thus completes the trilogy. You take control the main protagonist of the series, Ethan Thomas, right after the events of Condemned 2. It’s Christmas Eve and the game throws you right into a fight with a crazy and deranged Santa who you easily defeat due to his weight and lack of ability to move around very quickly. From there, Ethan realizes that with Santa dead, someone needs to get the presents delivered to all the children and he dons Santa’s outfit. It’s not all bells and whistles though because as you visit each family’s home you’re greeted by parents who have gone insane and want you dead. Ethan doesn’t give up though and the entire game requires the player to travel from house to house, whacking the parents with blunt objects until they’re no longer a threat, and successfully delivering presents and holiday cheer to all the children.

Pat Reddick: Bayonetta is actually an easy choice for a Christmas spin-off. I mean, come on, we’ve got the angels, and uh… well… Christmas Bayonetta would actually be kind of a dark take on the Christmas season. The story of Bayonetta is a little hazy to me, but as I understand it the Angels are actually the bad guys, so it seems to be like Bayonetta would be trying to stop the angels’ idea of what Christmas is. There’s going to be a demonic and a purgatorial ideal of Christmas as well, which are the ones that Bayonetta will be charged with protecting. Now, you might have noticed that the top part of Bayonetta’s hair is the perfect shape for a Santa hat, so she’ll definitely have one of those on all game. You can collect different ones which have different effects on your hair powers. Also there will be a way to dye her hair red so you can walk around looking more Christmasy. Mistletoe will be all over the place because what better way is there to increase sexual tension than that? The final boss fight will have to be on the North Pole against giant-angel Saint Nicholas. There will also be a scene/mini-game/whole level in which Bayonetta has to spend time handing out presents to children. It will also be released in like March or some really inopportune time.

Stevie Grant: Crazy Taxi is the perfect type of game for a Christmas spin off. Since the game is all about arcade based action it doesn’t really require a specific theme, which could make it very easy to create a holiday based spin off from. Of course you could just re-skin the game so everything is snowy but what’s the point of that? If I was in charge of a Christmas themed Crazy Taxi spin off I would go all out. Set it in the North Pole and pick up elves. You could take them into different parts of Santa’s work shop and get rewarded in presents. Or maybe even play as Santa himself dropping off gifts to different destinations.

Also keep the cheesy 90’s sountrack in it. Just add some bells behind it and you’re done.

Josh Newey: Twas the night before Christmas, and all through the house, not a creature was stirringHOLY GOD A GIANT MUTANT BEAST JUST BLASTED A HOLE THROUGH THE ROOF. A mere moment before Santa is due to head out on his annual journey around the world, he makes a mortifying discovery—his reindeer are missing. Now, Santa must enlist the help of the lumbering, flying beasts of Panzer Dragoon to deliver his gifts and to locate and save his kidnapped magical pets. Using the on-rails gameplay of the original games, Zwei Sleigh puts players on the back of a massive Rudolph-nosed creature, allowing them to ravage through quiet suburban towns, sweeping snowstorms, and gaping arctic caverns as they blast fiery gift-sized holes through the sides of unexpecting homes. Along the way, Santa encounters the regular Panzer Dragoon foes, as well as threatening holiday-themed baddies like possessed snowmen and bitter snowball-throwing “naughty-listers.”

Flake: As cut throat as politics are at Space Channel 5, I kind of always assumed that it must be some type of public television station. At Space Channel 5 there is a definite emphasis on the arts, local happenings, and helping people; sounds like the PBS of the future to me.

For a Christmas themed game, I imagine Ulala manning the phones at a telethon to raise money to help fund another year of quality programs on Space Channel 5 with your swinging support. She and a cast of Sega characters would be in the back ground chatting away on the phones, taking pledges from people who are probably not going to pay up and feel as though their programming is being held hostage.

As Ulala, you would rhythmically detect people lying about how much money they are going to donate to the station. Then you would press B to guilt trip them into actually paying money. Do poorly and the entire call center will look depressed. Do well and you earn the chance to play an actual level of Space Channel 5. Of course, these levels will only be reused ‘greatest hits’ levels that will randomly, and without warning, be reduced to a small square  in the bottom left hand corner of the screen while another random Space Channel 5 executive explains to you what your money will be used for.

1. Santa of the Dead

Sven Wohl: The House of the Dead series is pure horror cheesiness. It never took itself serious and there are several spin offs like Typing of the Dead to prove that. But I think the franchise could make with another spin-off series that most certainly would prove to be successful: Santa of the Dead. Instead of normal zombies, you would have hundreds of zombies dressed up as Santa Clause! I’m sure the main producers behind the series will come up with a plausible explanation for it. Just think about it: Shooting zombie Santas with a shotgun! Fun for the entire family!

The Sega Addicts 10 Games to Play this Halloween