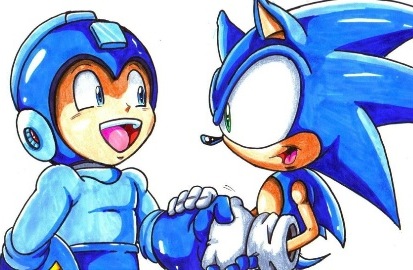 Picture by trunks24 on DeviantArt

Recently, Archie Comics began a Mega Man comic series.  Archie Comics has also produced the on-going Sonic the Hedgehog comic series since 1991.  With that in mind, who in their right mind would not love to see Mega Man and Sonic join forces?  In an interview done with Archie Comics writer, Ian Flynn, he was asked of the possibility of a crossover between these brave, blue heroes.  Flynn replied by saying that the decision is entirely up to Capcom and Sega, but if they both said “yes,” that Archie Comics would be all over that like Sonic on chili dogs.  Ignore my horrible jokes and enjoy the full interview here.