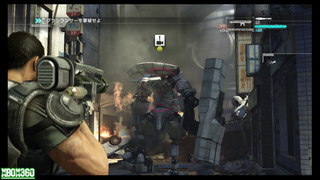 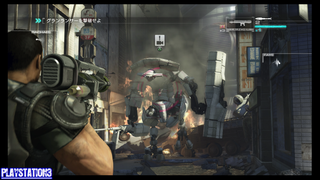 Binary Domain is just around the corner, with the lucky folks over in Japan getting their first taste of the game in a recently released demo.

As with any visually robust shooter, it was only a matter of time before the video and screenshot comparisons started making their way onto the Internet. Japanese blog Game wa Kimama ni is first in line, offering up an in-depth look at both versions of the game. Hit the jump for some specific stats, as well as a handful of screenshot comparisons (Hint: Mark another “L” in the PS3 column).

I’m sorry if that ignited any PS3 fanboy rage-flames, but the PS3 does fall a little bit behind, at least in the framerate department. The blog reports that while the 360 cutscenes chugged along at a constant 30 FPS, the PS3 version tended to fluctuate a bit, bouncing between 25 and 30.5 FPS and averaging at 29.008.

The difference is a little more obvious in gameplay, with the PS3 coming in at an average of 26.698 (fluctuating between 18.5 and 30.5 FPS) and the Xbox pulling ahead with an average framerate of 29.252 (fluctuating between 24 and 30 FPS). That being said, the PS3 version appears to be clean of any tearing, while the 360 is reported at the small percentage of 0.183% tearing.

There’s also a nice comparison video up on the blog to help illustrate the differences. The differences seem pretty subtle, but it still hurts me every time I see the PS3 fall behind by just a fraction. This is especially painful considering the fact that the Yakuza series has been a Sony exclusive since its beginnings, and now I find my traitorous mind wondering the unthinkable–would Yakuza look better on a 360?

Sega gives us a Kinect game to care about: Rise of Nightmares