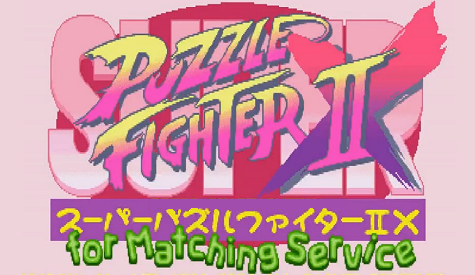 Arcades in the mid-nineties were dominated by the vast number of 2D fighters as the unstoppable genre continued to grow bigger and better. Capcom were of course responsible in the most part for the 2D fighter boom due to their numerous offerings including the Street Fighter II, Street Fighter Alpha and Darkstalkers series, among others. In 1996, however, Capcom attempted to create and release a game that would appeal to the puzzler in their fighting fans, Super Puzzle Fighter II X. But with just as many puzzle games as fighting games to busy ourselves with, how does Capcom’s offering hold up against some of the puzzling greats? Let’s find out as I specifically review the Japan-only, Dreamcast port. Just hit the jump and we’ll be on our puzzling way!

Reviewer Perspective: War Veteran – Has played the game to completion, and still returns to it, even to this day

Puzzle Fighter is a competitive puzzle game not unlike the Baku Baku and Puyo Pop games, in which you must out-puzzle a computer opponent or a human component to win. Like Baku Baku, gems of four different colours will fall into your play area, and come in groups of two which can be rotated left or right and, like in Baku Baku, adjacent gems of the same colour can be destroyed when one of these gems comes into contact with a ‘crash gem’ of the same colour, which appear as one of the two gems that fall from the top of the play area. For every gem destroyed, a ‘junk gem’ will be dropped into the opponent’s play area with the aim of completely filling up said play area. Arranging same-coloured gems into larger rectangles and squares will, when destroyed, send many more junk gems to the opponent, as does lining up combos. Rarer ‘rainbow gems’ will also appear on occasion, and will destroy all gems of the same colour as the gem it lands on top of. 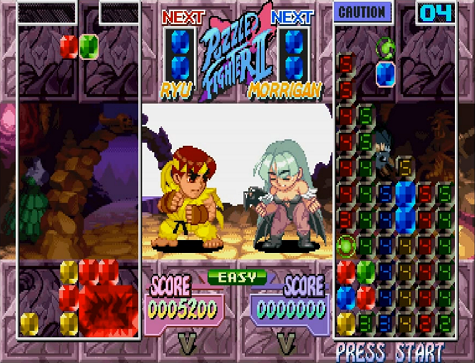 Puzzle Fighter’s gameplay is very simple to understand and the game can be played with little explanation, however the real depth of the puzzle action lies in Capcom infusing Puzzle Fighter with the back-and-forth, attack-and-counter type of play found in their many fighting games. What I mean by this is that junk gems only fall to an opponent’s play area after they have dealt with their two currently falling gems. This allows for quick and clever players to pull off well-timed successions of gem explosions, so that the opponent receives wave after wave of junk gems over the next few turns, or to do a few small explosions followed by a huge one to completely annihilate the enemy. However, the junk gems have timers on them that correspond to a number of gem drops, and once the timer runs out, each junk gem will turn into an ordinary gem which allows for willy opponents to turn the whole match around with huge counter-attacks.

As can be seen in the images throughout this review, the first thing that will draw many players to Puzzle Fighter is not the frantic puzzley action, but the the instantly recognisable, chibi renditions of classic Dalkstalkers and Street Fighter characters. There are 8 characters to select, with an additional 6 or so secret characters to play as, with each character having their own stage and theme music. The only real reason to select one character over another is that each character has a different pattern of coloured junk gems that drop on the opponents side. Unfortunately these patterns are not balanced, with some being much more complex than others, and as such, this is my only real criticism of the game.

During matches, your selected fighter will taunt the opponent and even perform their signature moves when a large number of gems are destroyed. For example, with Ken selected, if a match is won by unleashing an avalanche of junk gems onto your opponent, Ken will perform his patented Shinryuken, complete with flashy super combo finishing screen. Needless to say, this is the most satisfying way to beat someone at a puzzle game I’ve ever experienced.

Now, while everything I’ve written about so far applies to every available version of Puzzle Fighter, the Dreamcast version was released with some new additions Including two new gameplay modes, Y and Z, with the original arcade mode being named X. In Y mode, gems are destroyed by lining up three or more of the same colour in a similar fashion as Columns, and in Z mode gems come up in rows from the bottom of the play area, and are rotated in groups of four to line up with crash gems. These two extra modes are by no means revolutionary, nor do I personally find them to be any better than the original arcade mode, but they are welcome additions ensuring that you don’t get burnt out on the one mode. The additional Gem Edit mode allows you to design and save your own junk gem patterns, and the self-explanatory Network mode allows for online play, or at least it would if the server were not closed in 2003. 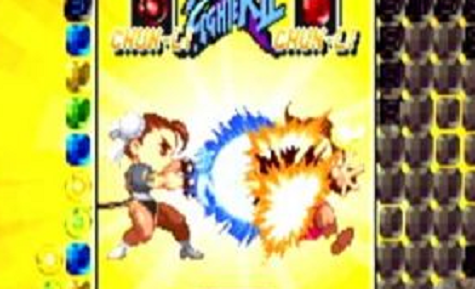 For those wondering why this specific, Japan-only version of Puzzle Fighter has been chosen for review, the answer is simple. Firstly, it is on a Sega console and that’s kinda what we’re all about here at Sega Addicts. Secondly, this version most closely resembles the game’s most recent iteration, Super Puzzle Fighter II Turbo HD Remix for XBLA and PSN. This particular version includes HD visuals, online multi-player and a rebalanced X’ arcade mode, which address the minor imbalances with the original arcade mode I mentioned earlier, and will be released as part of Capcom’s recently released Capcom Digital Collection along with seven other Capcom XBLA games.

At the time of its release, Super Puzzle Fighter II X for Matching Service was the definitive, home console edition of Capcom’s fantastic puzzler. While the core gameplay isn’t revolutionary, the game has little to no faults and plays well as a single player game, and is equally enjoyable when played head-to-head with friends. The intense, back-and-forth nature of gameplay results in fast-paced, exciting and very stimulating puzzle battles that really do give the feeling that you are playing a puzzle game inspired by 2D fighters. This, topped off with the almost adorable Capcom fighter theme, while completely cosmetic, ensures that game stands out against the myriad other puzzle games available. 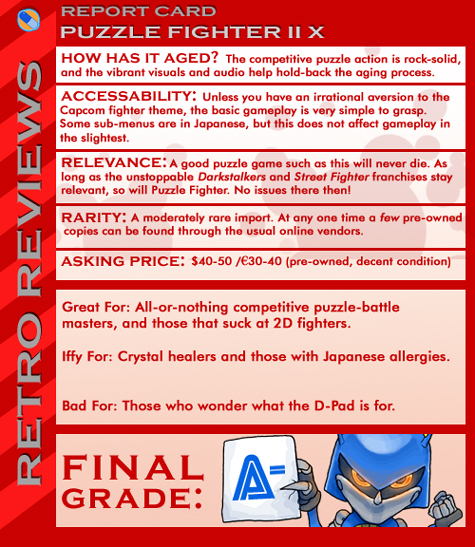 After Hours invades The Sega Nerdcast