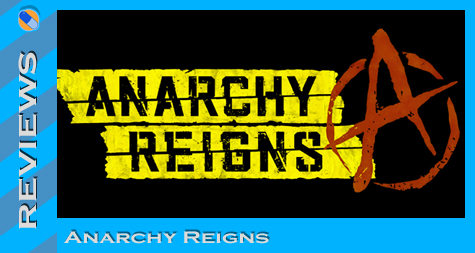 If you follow Sega Addicts in any capacity, you know that Anarchy Reigns has been a long time coming. It’s no secret that we’ve been anticipating Platinum’s latest offering for well over a year, our collective breath fogging up Sega’s proverbial shop window for what seems like a condensed eternity.

So of course any game cursed to spend this much time brewing in the pot simply begs that annoying age-old question—does this supremely hyped title live up to our expectations? Now that the sun is finally inching its way toward the horizon on an extended console generation, is Anarchy Reigns a fitting blood-soaked finale to Platinum’s consistently solid run of Sega-published titles? 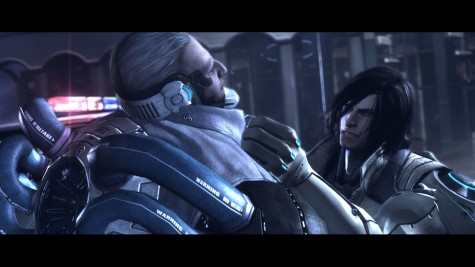 If any one attribute of Anarchy Reigns fits in perfectly with the preset Platinum Games tropes, its the humorously weird, albeit oddly serious, story. From what I could gather, the basic thread is as follows: In a dystopian future where mutants and biochemical weapons have ravaged the planet, two men on either side of the law are hunting a single fugitive by the name of Max Anarchy. On the renegade side is Jack Cayman, grizzled bounty hunter and protagonist of 2009’s MadWorld. Jack is pursuing the elusive Anarchy for a payday, but also yearns for personal revenge. On the other side is Leo, a justice-obsessed, cybernetic do-gooder who once relied on Max as a mentor and father figure years ago. Max has gone renegade, and Leo will do whatever it takes to find out what has led him astray.

Beyond that, I really have a hard time figuring out exactly what this story was trying to relay to me. Unlike the pleasantly tongue-in-cheek exposition that made MadWorld and Bayonetta so appealing, Anarchy Reigns’ story feels a bit too heavy handed for its own good. The story isn’t humorless by any means, especially when it comes to Jack and Leo’s interactions with the game’s myriad playable weirdos, but any and all attempts to add emotional weight were usually confusing and misguided. What happened to MadWorld’s carefree brutality and sadistic sense of humor, or Bayonetta’s peerless charm? 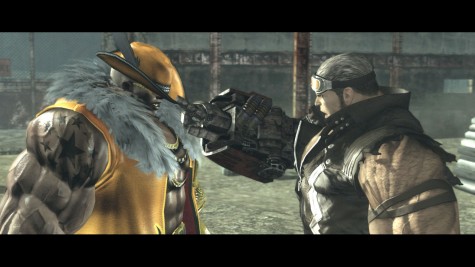 But seriously, story and dialogue has never been why people play Platinum’s titles. In Anarchy Reigns, the combat and controls are king. Taking the elegant flamboyance of Bayonetta down to its barest, simplest elements and mixing it with the relentless brute force of MadWorld, this game’s uncomplicated, responsive punch-em-up fighting is a non-stop showcase of flowing, satisfying destruction. With an impressive variety of enemies both big and small being thrown at you from all possible angles, the chaos is just about endless and almost consistently a blast, with combos reaching into the hundreds on a regular basis. Those expecting something complex and mechanic-heavy will likely be disappointed, as the item-based torture of MadWorld has disappeared, but the simplicity and accessibility of Anarchy Reigns’ fluid controls still makes stringing together powerful, destructive combos enormously and undeniably fun. 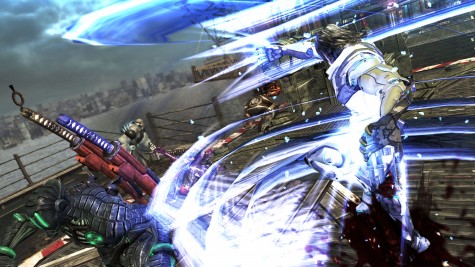 That said, how you feel about Anarchy Reigns’ combat will probably have a very significant effect on how you feel about the game as a whole, as you will spend almost the entire campaign doing that and only that, over and over again.

Platinum made a valiant effort to introduce quite a few interesting toys to spice up the way you can deal damage, from hijacking helicopters to firing weapons like rocket launchers and rifles, to riding fire-spewing hovercrafts, but even with these bells and whistles I can see many players growing weary with the antiquated repetition that has infused 3D brawlers in the past. In a genre that is almost always polarizing for its repetition, a lot of Anarchy Reigns often feels almost confusingly double-sided, due to its stabs at brilliant originality, mixed in with old standards and practices.

That duality reaches into most corners of the game, level design included. Each stage is set up as its own mini-open world, with different missions, either “Free” or “Main,” popping up once you’ve acquired a certain amount of points. These points are accrued by either completing missions with high enough scores, or simply beating the snot out of wave after wave foes until you’ve built up a large enough combo to progress. 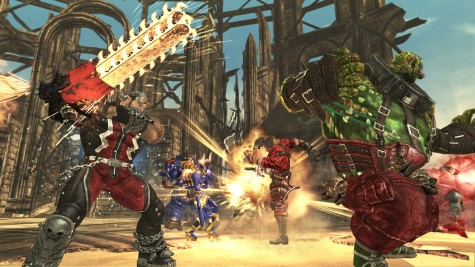 The problem is, both of these options are essentially identical. While a handful of the “Free” missions do offer a slightly refreshing twist to the straightforward beat-em-up gameplay, the vast majority are uninspired, over-used mini-game fare that almost universally feel like slightly different spins on “kill all the enemies.” Since your only other option to move forward is to just kill creatures in the open environment, “Free” missions often ended up feeling mandatory, just so I wouldn’t have to grow bored of the combat before finally moving on.

This issue is exacerbated by the way Anarchy Reigns’ campaign is set up. Split into two separate stories, “Black Side” and “White Side” (an appreciated nod to the color scheme of MadWorld), Anarchy Reigns actually cycles through the same four environments twice before its measly six-hour running time reached completion. Missions do vary for both Jack and Leo, and map layouts do blessedly change slightly between campaigns, but some of the worst missions get repeated twice, including one awful boss battle with a giant squid in the first half of both plot lines.

This is especially disappointing considering that the actual contents of these four environments are some of the most inspired bits of the entire game. Each stage is a playground of chaos, as massive, sweeping events interfere with everything you do. These creative hazards run the gamut from giant tornadoes and black holes to carpet bombing air raids, giant spinning buzz saws, and murderous solar beams. Even after finishing the main campaign, I still find myself unearthing more of them in the game, and even though the way they cycle through over and over gets somewhat predictable after a while, they go a long way in helping Anarchy Reigns to live up to its promise of chaotic destruction. 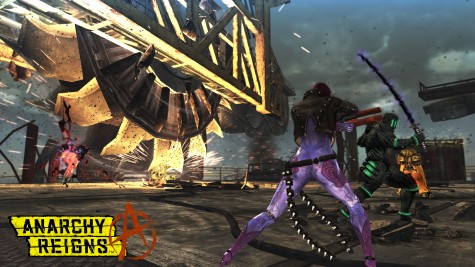 Another element that meets this level of sheer inventive insanity is the ridiculous and varying cast of playable characters. While the core combat remains ultimately the same, each of these beautifully constructed, absurdly entertaining creatures offers up plenty of clever gameplay tweaks and unique visual flare that makes exploring the game with each of them a real blast. My personal favorites are Daruga, a Transformer-like robot that turns into a plane when he runs, and Oinkie, an appropriately piggish man with the inexplicable power to transform into a giant monstrous lizard.

It’s a bitter shame, then, that the campaign doesn’t offer more opportunities to play with each of them. While I loved the crisp, fluid combat of Leo, I found Jack to be one of the blandest fighters in the entire roster, and if the Platinum had spent more time switching from one unique character to the next during the story, they really could have spiced up a campaign that was aching for some variety. This game deserved to be about everybody that Platinum managed to dream up, since that’s obviously where they felt most inspired when building it.

Well, I suppose that’s why the multiplayer exists. 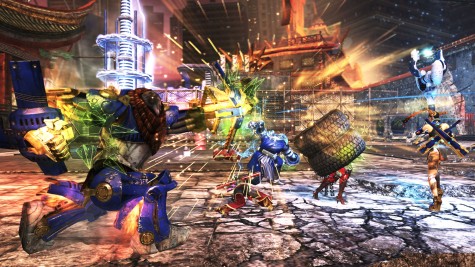 Some may not agree with me, but the multiplayer of Anarchy Reigns is where this game’s sense of unbridled chaos really shows its teeth. More “Platinum” than anything else in the game, these fast, sloppy modes are where the developer combined every idea they could conjure, from bounty kills (a limited amount of time to take out certain players that gets you extra points) to the same random hazards and monsters that spice up the main campaign, to absurd modes like a football-esque competitive match and a helicopter dogfight.

Utilizing the mainstay multiplayer modes found in first person shooters, including Deathmatch, Team Deathmatch, Capture the Flag, and Battle Royale, these bouts pit the game’s wild creations against each other in giant arenas based on the campaign’s different environments. Whereas so much of the campaign fisticuffs feel repetitive and one-sided, the various outlandish combat styles of each character really get their much-deserved moment in the sun here, finally infusing the game with the real anarchy promised by the title. Every once in a while, I found myself taken aback by the ridiculous, flashy destruction overtaking my screen. It’s a stunningly beautiful, excitingly chaotic, eye-catching mess. 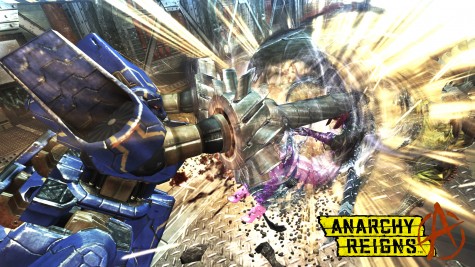 These praises aside, it can’t be avoided that many of these matches can feel rather unbalanced, when button mashing opportunists can easily rush in, spam a few unfair moves, and steal another man’s kill. Because so much is being thrown in at once, certain brilliant moments of heated, lunacy-fueled combat are absurdly entertaining, but also ridiculously one-sided. This especially goes for the area-clearing spin move, which sends all surrounding enemies flying back, no matter what they are doing. Players are already latching onto this like a security blanket, and without some kind of modification its overuse could start to drive more noble players away.

Since all the level hazards from the main game also make an appearance, players are not just competing against each other, but standing up against the ridiculous elements, and that does help to even the playing field a bit. Even the most vicious fights become co-op when massive “Cthulu” mechs invade the game, or when that damn Octupus thing once again shows its ugly mug. 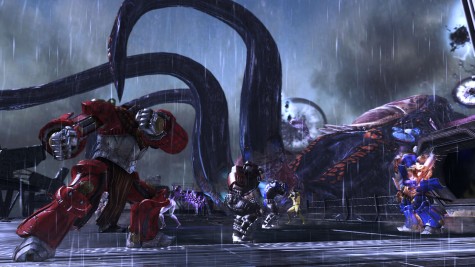 While I’m making complaints about odd unfair decisions, it makes no sense that the number of players required for a match can’t be reduced or increased. Each event has a fixed number—16 players for Battle Royale, 8 players for Team Deathmatch, etc—that can’t be modified no matter what. This misstep, however minor, makes the wait time for certain matches to be insurmountable, and considering how difficult it will already be to get a decent group going on such an obscure game, any kind of restriction is almost suicidal.

Across the board, Anarchy Reigns is one of the most dichotomous games I’ve played in years. At its best, the unabashed devotion to ridiculous insanity is refreshing, and the characters, environments, combat and art design are nothing short of outstanding. I know I will return to the amazing combat again and again, but I would not be surprised if that wasn’t the general consensus. That’s because at its worst, the once inspired and idea-filled worlds are trotted out again and again, making an experience that’s just six hours long feel stretched and exhausted. And I didn’t even know that was possible. 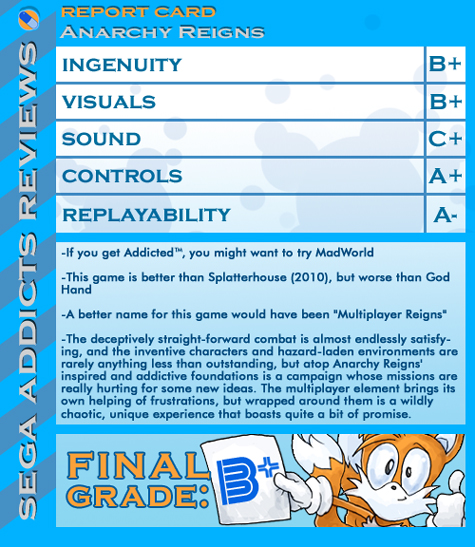 Trust is an important factor in Binary Domain