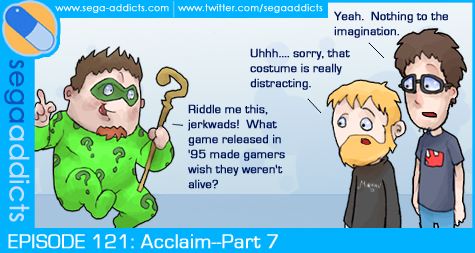 On this week’s episode we finally make it to the 32-bit era as we discuss not one but two Saturn games released by Acclaim. Unfortunately, they’re NFL Quarterback Club ’96 and Robotica but things will improve, right?

In addition, there’s some discussion on the mess that is Aliens: Colonial Marines, Batman Forver, Spider-man: The Animated Series and everyone’s favorite George Foreman Grill simulator, Foreman For Real for the Genesis.

A new podcast is coming to the site!