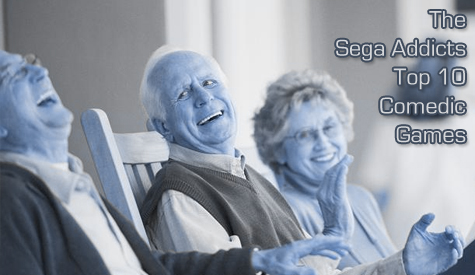 Comedy and video games often don’t mix well together. Unlike movies, comics, books, stand-up and many other more controlled mediums, a player’s experience with a video game can drastic differently from other players who are playing the exact same game. Things like timing and delivery are much harder to judge when you can’t predict exactly how a player is going to approach your game.

However, even with these challenges, there are some developers who have done a great job of implementing comedy into their games by taking an approach that works with the format. We’ve taken a look back at ten games on Sega consoles or published by Sega that we feel did an applaudable job at making the player laugh, or at the least smile a bit.

Hit the jump to find out our top 10 comedic games! 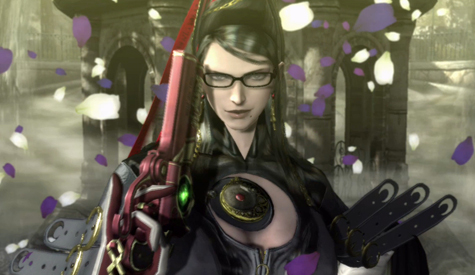 Mike Kyzivat: Bayonetta isn’t so much “ha, ha” funny as it is “WTF!!” funny.  Much of the humor comes from the ridiculous fight scenes and incomprehensible bosses.  Oh, and don’t forget the gratuitous butt shots as well.  Make no mistake though, the game is fully aware of its over-the-top craziness,  so it revels in it every chance it gets.  How you might ask?  Well, for starters Bayonetta has a chewing gum walk that would make Wrigley’s blush.  Fight scenes are so fast and complicated that the game has to go into slow-mo just so you can see what is going on, but half the time even that doesn’t help.  She also offs one boss by placing a peeing cherub statue on top of his limbless body.  Did I mention the statue is peeing gasoline? she then ignites the gasoline trail with her high heel gun (yes that’s right) and when that doesn’t work she fires a bullet into the statues pee hole blowing it up and setting the boss on fire.  If you want more examples it would just be easier for you to play the game then to have me list all of them, but trust me you’ll laugh out loud because of “WTF just happened?” 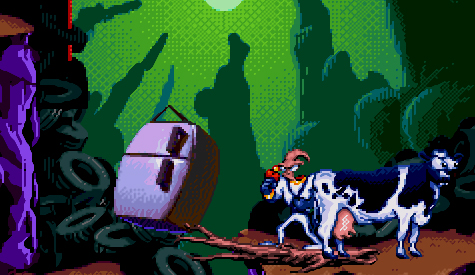 Michael Westgarth: I’m not sure if Earthworm Jim’s conception was the result of hours upon hours of brain storming, or if the original designs were drawn on the back of a snotty tissue. Either way, developer Shiny Entertainment and creator Doug TenNapel’s attempt at making a Sonic-beater resulted in an unforgettable game that, if my nineteen year old memories serve me well, eclipsed Sega’s own efforts, at least for a time.

Earthworm Jim achieved this feat by offering players a nonsensical mish-mash of random bits and bobs that, combined with excellent controls and gameplay, came together to make an absolutely fantastic 2D platformer, Where else would you see a goofy looking worm in a beefy super-suit use his own head to whip crows out of the sky? What about a bungie-jump battle against a soldier made of snot? Or Professor Monkey-For-A-Head? All of this and more was presented to the player without any in-game explanation, making for a bizzarre yet hilarious game that doesn’t take itself serious and doesn’t expect you to either.

At a time when 2D platforming was a serious business and every single game tried to “out-cool” each other, Earthworm Jim reminded us that excessive silliness always has a place in videogames. 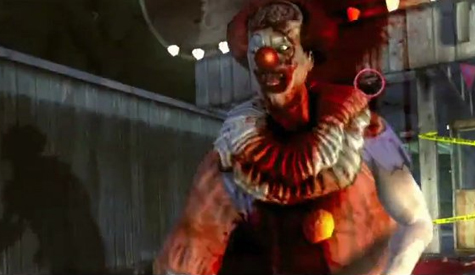 House of the Dead: Overkill

Josh Newey: As a fan of sleazy, blood-splattered horror, Overkill pleases me beyond measure. But even outside of the satisfying gore and straight-forward gameplay, the bulk of this game’s immense appeal is its shameless yet fine-tuned sense of humor. Every single moment of Overkill is dedicated to both celebrating and mocking the grindhouse aesthetic, from the tongue-in-cheek movie trailer cutscenes to the absurd (and absurdly disgusting) boss designs. Seriously, how many games pit you against a Laurel and Hardy-esque pair of mutated strippers, or a psychic quadriplegic who pummels you with his mind? How many games will throw you into the last boss fight, only to replace its first half with a “missing reel” frame? All that’s missing is the sticky-floored movie theater.

But even better than these moments is the the hilarious chemistry between Agent G and Isaac Washington. Their supremely written, unerringly profane conversations never get old. Even in the game’s least engaging moments, these two badasses effortlessly carry the gleefully ridiculous story on their blood-soaked shoulders.

If you’re looking for the ultimate way to experience this game’s sense of humor, be sure to get the Extended Cut version, as both new stages offer up some of the best laughs this game has to offer. 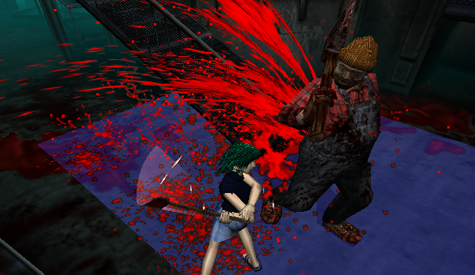 Tom Kyzivat: You could focus on the clever takes on conventional western horror.  You could mention the way the game itself is a spoof on the survival horror genre.  You could even bring up the bizarrely placed Toy Story parody in which Woody tries to rescue a sex doll.  But all of that is really irrelevant when you face the last boss.  There, in the background, adorning a giant door, for no reason, is a giant ass.  Yeah.  It’s just sticking out of the door.  Like it’s a sculpted part of it.  For no conceivable reason.  Giant ass.  Call it simple, or immature, or downright disturbing, but that’s all I need. 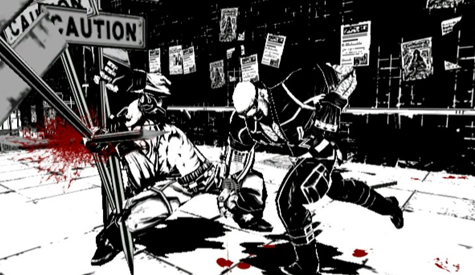 Alex Riggen: Ramming an enemy’s body into spikes or impaling them on a street sign may not sound like a funny situation to be in, but MadWorld does it in such an exaggerated way that the violence becomes ridiculous rather than offensive. It’s a comedic theme people have seen for decades in cartoon series like Looney Tunes, Tom & Jerry and more recently, The Simpson’s Itchy & Scratchy. The art-style accentuates this effect even more by having an entire color scheme of black and white with extreme amounts of blood splashing the screen with red. In addition, to the cartoonish violence, comedic duo Greg Proops and Joe DiMaggio provide color commentary to everything your character is doing in the game. If you take a typical sportscaster and add in constant swear words and offensive comments about your mother, you’ll start to get a good idea of what the commentary and this game are all about. 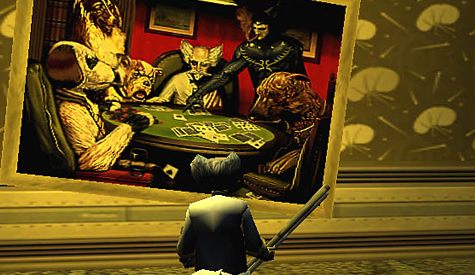 Alex Riggen: MDK 2 was the first and remains one of the only games I’ve ever played and laughed out loud. While the entire game is full of amazing humor tailored perfectly to a video game with a playable scientist that can shoot toast, a main character who used to be a janitor and now can snipe people from his ridiculous looking cone make, and a dog with four arms that can all be equipped with machineguns and other devices of mass destruction, there’s one scene in particular that sticks out. In one of the levels where you’re playing as the janitor you have to jump from platform to platfrom and make your way up to a higher location. The thing is, it’s incredibly difficult and there’s an audience of enemies who don’t attack you but just watch you as you make your way to your objective. As you jump the entire crowd gasps in suspense to see if you land on the next platform and if you do they erupt in applause. It’s an extremely unique and well thought out experience for a video game and over ten years later, the Portal series may be the only other game I’ve played that combines a gameplay experience and comedy in such a perfect way. 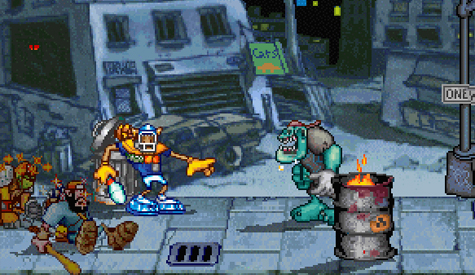 Tom Kyzivat: Few games on the Saturn (or any console, for that matter) were as charming as Three Dirty Dwarves.  The characters were well-developed, had distinct personalities, and the game itself felt more like you were playing a strange cartoon than a beat’em up.  I suppose the fact that it had fully-animated cut scenes helped as well, and despite the sketchy voice-acting, they managed to be genuinely witty.  Through and through, Three Dirty Dwarves (despite having a pretty deep, scientifically complex backstory to the plot) was a game that refused to take itself seriously, and that’s something today’s games could learn from. 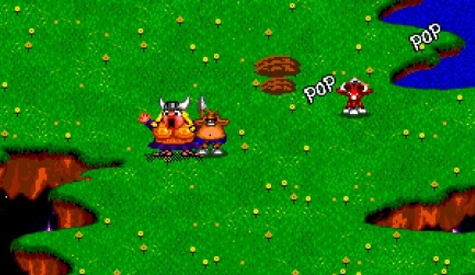 Mike Kyzivat: There’s no denying ToeJam and Earl is a funny game. It’s still funny to this day thanks to its sense of parody and its great sound effects that punctuate the humor even more.  Most of ToeJam and Earl’s humor lies in the two characters themselves and the late 80’s/early 90’s rapping theme.  From tip toeing to rocket skating the game is filled with funny animations for the duo. You can give your buddy a high five to boost his life and even the level of the character you start out as is funny (called wiener). Then there’s the enemies who are almost as big of stars as the funk-a-delic duo.  There are mad dentists, herds of nerds, fat guys pushing mowers, hula girls that make you hula dance with them and every other conceivable stereotype of suburbia is here.  Let’s not forget about the sound effects too. Yes, you’ve seen someone get a sharp object to the butt, but the accompanying “YOUCH!!” sound effect makes it that much more funny.  Or the “meep meep” sound of a car horn that randomly plays when you use your super speedy high tops.  This game is chock full of funny stuff, and if you have not played it then you need to stop reading right now and go download it as I believe it has been made available or will be available on XBLA or PSN. 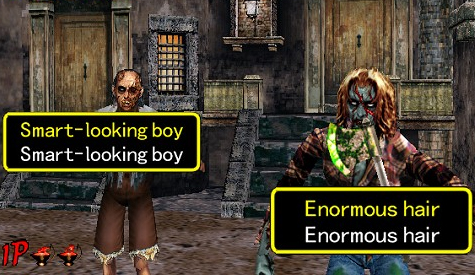 Michael Westgarth: I’ve never seen so much herpes in one place. No, I’m not talking about the Sega Addicts forums, I’m talking about Dreamcast oddity The Typing of the Dead. As if House of the Dead 2 wasn’t peculiar enough, those jokers at Sega decided to replace lightguns with keyboards in an attempt to teach gamers around the world the joy of touch typing.

But how can a keyboard kill a zombie? Easily, just type out the word attached to the zombie and BAM! Dead zombie. With completely bizzarre words and phrases popping up such as the aforementioned “herpes”, “nasal wig”, “Stop chewing on my toenails” and more, The Typing of the Dead will keep you on your toes, or fingers as it were.

Originally an arcade game, The Typing of the dead made its way to the Dreamcast and supported the official Dreamcast keyboard. If you find yourself in the possession of the keyboard, do yourself a favour and check out The Typing of the Dead. You’d never guess that learning to touch typing could be so much cotton-picking fun. 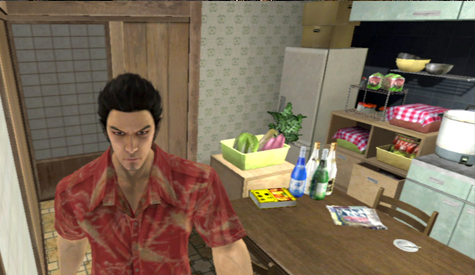 Josh Newey: The Yakuza series may be well known for its engaging storylines, but just below the  surface of this dramatic saga is a healthy, self-aware, and flat-out wacky sense of humor. The streets of Kamurocho are flooded with entertaining characters, many of them forcing the stoic Kazuma Kiryu through hilariously outlandish side quests and humiliating events that involve everything from acting in movies to chasing down cats to taking unhinged women on dates. These moments are a stark contrast to the game’s often poe-faced story, and give us a much-appreciated breath of fresh air from a relentlessly violent world. My personal favorite moments are found in Yakuza 3, when Kazuma regularly witnesses bizarre, often hilarious acrobatic events in the world around him, and triumphantly blogs about them on his cell phone. Think about it–an epic cutscene full of dramatic camera movements, exaggerated sound effects, and flashy editing—all for a guy typing on his phone. Priceless.