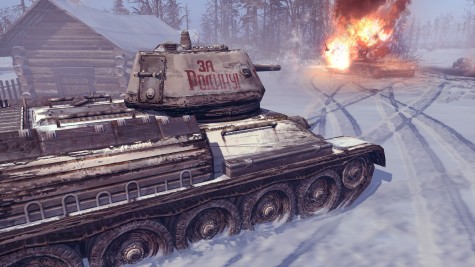 Company of Heroes 2‘s release is just a few short months away, so of course it’s time to unveil the obligatory preorder incentives.

Players who reserve their copy ahead of time will get the single-player “Theatre of War” mini-campaign, which is also set for independent release sometime in the future. Multiplayer fans will also be getting the Winter Ambush and Voronezh vehicle skin packs, as well as special multiplayer commanders for each army. The German Army gets the Joint Operations Doctrine (artillery) and Offensive Spearhead Doctrine (heavy armor and airstrikes), while on the other side Soviets get the Anti-Infantry Tactics Doctrine (including a flamethrower tank) and the Conscript Support Tactics (reinforcements).

A free mini campaign, exclusive skins, and a handful of extra multiplayer perks? Not a bad deal considering how scant a lot of preorder content tends to be. Anybody planning on plunking down a fiver to try out some of these extras?

Phantasy Star Online 2 is a little different on the Vita