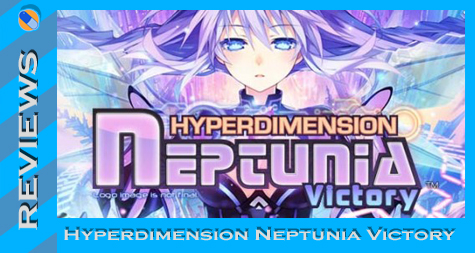 “Think any game reviewers won’t get this one?”

That’s the text that accompanies the very first trophy you get in Hyperdimension Neptunia Victory. We here at Sega Addicts never really “got” the Hyperdimension Neptunia franchise. The premise of a game based around the console wars sounded fun on paper, but the execution has been anything but. The first game, while given a lot of hype (and a contest even) initially, was basically written off as a borefest, and Mk2? Well… The lengthy rant on the I had on the creepiness factor should speak for itself.

But I also mentioned that deep down, there was a good game scratching and clawing to break free from the lolicon fantasies and overall blandness that put me off before, and when no one else here was interested in covering the third sequel, I couldn’t help but feel the need to give Neptune and Co. one last chance to impress me and right the wrongs of Mk2.

Which brings us to Victory. By bringing back the heroines from the first game and setting itself in a world based around the early console wars, does the latest game in this beleaguered series finally live up to its initial potential? Or is my show of good faith rewarded with another plodding pedophile nightmare? Hit that jump to find out.

There are very few games I have been more apprehensive about starting than Victory. My experience with Mk2 had me fearing the absolute worst, and given the similarities at the start, right down to having the same soundtrack and models from Mk2 show up, I had the feeling I was going to be in for a long, creepy ride. I started to cringe as I heard some of the all too familiar voices, dreading the brightly colored moe task ahead of me.

And then the unthinkable happened. I actually stopped feeling sick for agreeing to do this, and honesty started to enjoy the thing.

The biggest reason, and by far the biggest upgrade between Mk2 and Victory, is the writing. Gone are the bland, lifeless attempts at characters of the past. Practically everyone on the team is surprisingly well established and written this time around, even those from the last game that bored me to tears. There’s a few problems still, like how annoying non-transformed Plutia can be (although once she transforms, she’s hands down the most entertaining character in the game, aside from maybe Blanc), but I’m rather impressed at how well they’ve done on the whole.

They’ve also made good use of their original premise this time around. One of my many criticisms of Mk2 was that it didn’t really play up the console war inspiration aside from the heroines wearing vaguely system-related outfits, and the constant namedropping of Arfoire. That’s been fixed as well, with the references coming a mile a minute. They even hit on the PlayStation hacking fiasco from a couple years ago, which, given the game’s PS exclusivity, kinda surprised me considering how much of a touchy issue that has to be for Sony still.

The biggest improvement with the writing, I’m proud to say, is that there was nothing horrifyingly squicky in Victory. Yes, it has its slightly “man-I-hope-no-one-walks-in-right-now” moments, mostly courtesy of Plutia, but I would put them more on the level of Final Fantasy X-2‘s infamous massage minigame instead of “this little kid is being raped by a gigantic lolicon robot and I want to physically harm whoever thought this was a good idea”. The closest we get to anything of that sort is one of the villains being a voyeur, and even that is implied to be less sexual and more “stealing your nation’s secrets”. On the whole, less kid licking, better characters, and actually being entertaining without making me feel like a horrible human being for playing it was really all that I wanted from this, and they finally, by god finally, delivered.

The slightly disappointing thing is, that’s just about the only truly huge improvement between the games. Graphically, it’s really just about the same as before. While the new designs for the older characters are nice, and the new villain group is well designed, there’s nothing really major to write home about there. Characters who didn’t get a facelift for Victory are ripped straight from Mk2, and even the animations are exactly the same, although the new visual effects accompanying them are much improved. And while the new areas are pretty nice looking initially (especially the first jungle area), the luster wears off quickly, which I’ll elaborate on in a later section.

The biggest surprise is the music. While Mk2 had a couple decent tracks, it was mostly boring and got repetitive fast. A few of those tracks return for Victory, but the surprise is the quality of the newer music, thanks in no small part to Compile Heart somehow managing to snag the services of Nobuo Uematsu and his band Earthbound Papas. Yes, the same guy who brought us some of the most iconic music in RPG history is working on bloody Hyperdimension Neptunia now. That’s HUGE for the series in several ways, and it pays off quite a bit. The only negatives, really, are that the new tracks are rather few and far between, and they (along with the older tracks, naturally) repeat far more often than you’d expect your average RPG soundtrack to do, kind of killing their appeal by the time you get halfway through the game. Also, not including the Seven Sages’ music on the free included soundtrack will forever disappoint me. Make your free throws, guys.

Despite my initial thoughts, the voice acting has certainly improved as well. The previous game really didn’t do a great job of differentiating the voices, as it felt like almost everyone was trying to do their best impersonation of Cristina Vee’s Compa instead of setting themselves apart. Knowing how good the cast behind the characters can be, this was a huge disappointment, but thankfully, this is averted in Victory. Everyone’s got their own distinct personality to their voice finally, and for the most part, the voices match the characters quite well. Special mention has to go to Melissa Fahn for channeling the old Sailor Moon dub for Neptune, and the aforementioned Cristina Vee doing really well playing against her usual type as the vulgar tomboy Croire. The only massive disappointment is non-transformed Plutia. Her battle cries just annoy me to no end, although this feels more like a character flaw than an acting flaw. Also, the rate in which battle quotes are repeated is far higher than it really should be, even compared to Mk2′s rate-of-reuse. Are you starting to see the pattern here?

As far as gameplay goes, not much has changed. The core battle mechanics are only slightly tweaked, and if you didn’t have any trouble with the first games, this one won’t throw you for that much a loop. The biggest changes are outside of battles, in the forms of the Scout System, where you send an NPC out to check out a dungeon and can net you extra stat boosts, items, and even hidden dungeons, and the addition of post-chapter ratings, which I still haven’t figured out how to get a perfect score on. They’re not exactly important unless you’re trying to get perfect runs or secret items, but they don’t really drag the game down either.

The most common complaint I’ve seen online about Victory has been a huge leap in difficulty, but I can’t say I experienced it much outside of the early stages of the game. Victory is a bit tougher as a whole than Mk2 was in the early stages, with enemies hitting harder and one-shot kills being a very real possibility for once, but it’s nothing a little grinding and proper equipment can’t fix, and the difficulty spikes aren’t nearly as massive as the ones that plagued Mk2. All in all, it’s a nice challenging ride, and I can’t ask for anything more than that really…

Except some variety. I’m sure you’ve figured out the game’s biggest downfall by now, but let me spell it out again: REPETITION. I know it’s a sequel and reusing assets is a thing that always happens, but Victory takes it to a new level on the laziness scale. The game provides hope at first, with the first areas being completely different and new, but just like in Mk2, you start to see those maps reused again and again, even into the endgame, with the only things changed usually being the enemies, or maybe very miniscule differences in paths. It was annoying enough just with that, but then they started reusing level maps from the previous game as well, adding only the occasional extra room. When the game is supposed to take place in an alternate universe, I’d like to think said alternate universe would have something different than the same generic factory or cave we saw a million times in the last game.

Disregarding that, though, I’ve gotta say I came away from this rather surprised. I went in expecting the dirt worst, and for awhile I felt weird for even remotely enjoying a Hyperdimension game, anticipating the whole thing’s eventual downfall into the same perverted traps as before. But as time went on, those feelings slowly went away and I was genuinely having a decent time, even with some of the glaring issues mentioned above. Honestly, I can’t tell you how proud I am to say that.

I’ve given this series a lot of well-deserved flak on here and on my various social networking places, to the point of people joking that I have Vietnam flashbacks over it. But despite my jokes I really didn’t want to hate Victory, and it just feels so good to actually say nice things about a Hyperdimension game for once. It isn’t a perfect game by any stretch of the imagination, and I would still recommend other RPGs like Resonance of Fate or Valkyria Chronicles over it, but compared to Mk2, the difference is night and day. If you want a fourth, fifth, and sixth wall shattering lighthearted RPG and have a high tolerance for reused assets, occasional dominatrix moments, and the color pink, it might be worth giving a rental if you can find it somewhere.

Rejoice, Compile Heart and Idea Factory. It looks like I finally “get it”. And thankfully, you finally do too. 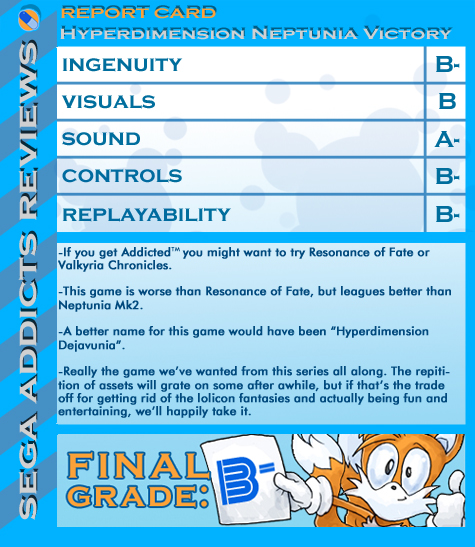 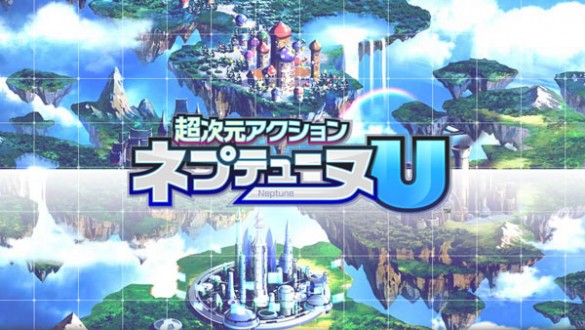