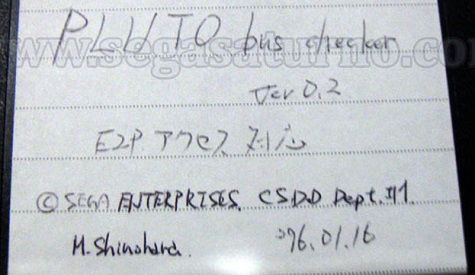 If you’ve been keeping up with the ongoing Sega Pluto saga then you’ll be aware that there are only two of the unreleased prototype consoles in existence, both originating in the U.S. and both are region locked to American Sega Saturn games. While this strongly suggests that Sega Pluto development was carried out almost exclusively by Sega of America, new evidence suggests that Sega Japan were working in some capacity on the Sega Pluto as well.

Assembler Games forum and Sega Saturno member Ryo Suzuki, who released these previously mysterious photos of a Sega Pluto terminal CD-ROM, has shown off an uncensored version of the photo along with a photo of a floppy disc that reads as follows:

The Japanese characters on the floppy disc combined with the fact that Ryo Suzuki claims these items were sourced from Japan  opens up the possibility that Japanese versions of the Sega Pluto may exist in some form.

Additionally, due to the Japanese dating convention being the reverse of that used in most regions of the world, then Sega were working on the Sega Pluto as early as the very start of 1996 and were likely to have come up with the idea some time before.

We’ll keep bringing you all the Sega Pluto news as it comes, so be sure to stay up to date by following us on twitter @SegaAddicts or by downloading our handy iOS app. Hit the jump for full pictures of both the CD-ROM and the floppy disc.

The Conduit HD coming to iOS