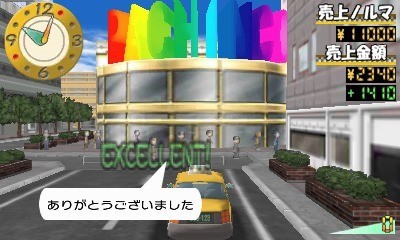 Unfortunately no one is going to Tower Records.

If mounds and mounds of Crazy Taxi ports still don’t sate your hunger for sociopathic cab driving, D3 Publisher may just have the cure for what ails you. As part of their massive @Simple line of Japan-only discount titles, the publisher is releasing The Taxi, a whimsical, time-based cab driving sim for the 3DS eShop. The game has you navigating the streets of “Rainbow City,” picking up adorable passengers and transporting them to their destination.

As you can see from the shot above, this game looks more than a little like Sega’s classic of vehicular mayhem. The only intriguing difference is the addition of customization, allowing players to gussy up their ride with a bumper, license plate, wheel, sticker, wing, and special accessory. Players can also purchase power-ups to tweak their cab’s performance.

The Crazy Taxi series has not been updated in ages, and while The Taxi certainly loses points for lack of originality, little additions like customization would certainly be appreciated if Sega ever did decide to make another sequel to their game. At the very least a Mii-ified version of Crazy Taxi for 3DS could add a little extra visual flair.

Japanese players will be able to get their hands on The Taxi for 600 yen ($6) this June.

Japan is getting Fantasy Zone II as their next 3D Classic