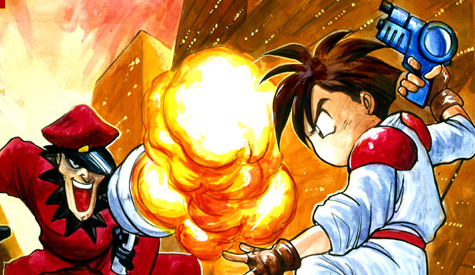 According to Senour, Treasure’s classic was rejected at first by twelve other producers.

If I didn’t pick it up, it was going to be rejected. I played it for five minutes, maybe less, and threw the controller on the floor and said, “This is game of the year”. Every one in earshot laughed.

The biggest complain was suprisingly the size of game’s sprites.

The reason was made very clear to me. Gunstar had small characters. We had just published, or were about to publish, World Series Baseball with a huge batter. All the games were showing off something the developers of Spider-Man had discovered, a way to make double high sprites. Gunstar didn’t use this and so the others passed. I saw it as something different.

Well, I’m glad Mac Senour did the right thing. He pretty much saved my childhood.

Yakuza of the End gets a gameplay trailer