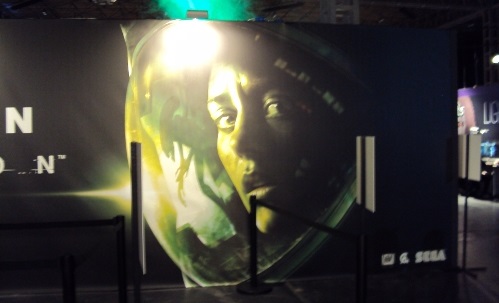 The upcoming Alien Isolation could arguably be the last chance the franchise has at becoming a legitimate videogame experience. Last years Aliens: Colonial Marines was a disaster for all involved and something which anyone would assume to be the final nail in the coffin for Xenomorph titles. However kept in secret was the development of the aforementioned title, a game which for better or worse may just be the only hope the series has at gaining acclaim in the videogame world.

So it is with these thoughts that I went into playing the Alien Isolation demo at Rezzed 2014. While only a small snippet of the final product, it did give me an impression, and an expectation for what to expect when the game reaches shelves later this year. Hit the jump to find out what that was, as I take you through the dark corner of space that was on display.

From all the advertising and videos, you’ve probably already gathered that this title is set to take more of an inspiration from the first Alien, rather than its action orientated sequels. In this respect the demo was an extremely impressive recreation of how the 1979 classic looked and felt. The retro-future aesthetic is more than a media buzz tidbit as great detail has gone into how everything looks. All the environments and textures were expertly crafted to give the impression of an analogue future. Small details like chunky keyboard buttons and vector monitors added a uniquely distinct feel to the game. One thing for sure is that this certainly doesn’t look like any game being developed at the moment. This worked very well considering it wasn’t rubbed in my face either. There was just enough to make this seem like the world of the original Alien, without it feeling that it’s trying too hard. Of all of the things previewed here these design choices were definitely the most impressive. What that says about the rest of the demo however raises some concerns in me.

As with the art style Alien Isolation is set on emulating it’s inspirations down to the tone. There was definitely more of a horror vibe to what I played and the sneaking mechanics look to compliment this feel greatly. However this sense of horror is butchered by the pacing of the demo itself. In the original Alien, the audience never sees the creature in full. The Xenomorph is a being of the dark. The result of this forces the viewer to create their own personal nightmare visions, essentially tailoring the tension to the individual. It’s an expertly crafted horror technique, but one that has to trust it’s audience by providing them with little to no visuals on the stories antagonist. The Alien Isolation demo however did not trust the player enough to pull this off. Very early on in the demo you see a full glimpse of the creature, and several times you are treated to long looks at the models full body. While I appreciate that the monster itself has become iconic this does not lend well to a horror atmosphere. You actually see the creature itself before any sneaking, and are also given huge opportunities to view it every time you die. In this preview there was simply no room for manufacturing my own nightmares- the nightmare was given to me on a plate, an unfortunate aspect that changed how I saw everything else considerably. 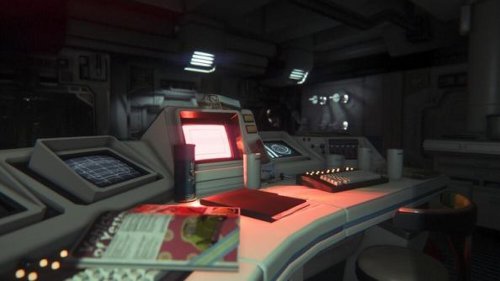 A lot of the demo consisted of tiny details made to build up the atmosphere, and in this respect it seems like the game is moving in the right direction. The motion tracker for example is in theory a great idea for a genre such as this. You can track where the Xenomorph is, but the details to where it’s actually hiding are purposefully ambiguous. The demo only included a taste of how this tool will be used in the full experience but if this remains the key item in the entire game then I have to applaud its usage. Aspects like this are also shown with a battery gauge attached to your torch. While it didn’t deplete fast enough to be scary in this small taster, it is an exciting mechanic which could lead to very interesting situations in regards to light preservation. But this is all potential I’m talking about. The actual demo itself was just not scary, and I’m afraid that if this preview reflects the full experience, then these great ideas may have just been wasted.

Near the end of the demo I was tasked with surviving a few brief moments while a door waited to open. This is obviously an attempt at drawing suspense as it’s very clear that the alien is in close proximity to you. This opens up a lot of choices when trying to hide from the thing. There were lockers scattered around, and other hiding spots useful for keeping away from the lurking terror, but unfortunately I found my home behind a box. Yes, you can fool this ‘incredibly sophisticated’ AI like you can in most mediocre stealth titles. I simply just walked around the boxes whenever the alien was coming near, and it’s very easy to tell when it is considering all the noise it makes. The creature has a very physical presence in the demo. It stomps around, it walks heavily, and there’s no mistaking where it is once you know it’s near. This is why I’m afraid of the motion tracker being made redundant. As that tool does its best to shroud the enemies location, the creature itself just simply doesn’t blend into the shadows enough to make it a truly frightening force. You definitely know where it is, and that just isn’t conductive to a horror setting. 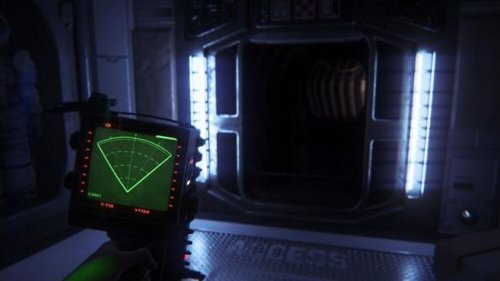 While all the aforementioned seemed to remain completely lame in terms of horror, there was one aspect of the game that really did give me shivers: The bugs. Or just ‘a bug’ to be precise. At the very end of the demo the Xenomorph got stuck in a door. It still made loud alien noises, but was just continuously walking into the same texture over and over. This not only gave me a very good look at the full thing, but a very serious concern over the possibility of this happening in the final product. While this is only a small glitch, it absolutely broke all tension and could possibly be devastating if it were to happen in the full campaign. This was the last thing that occurred in my preview of the title, and it left a horrible sour taste in my mouth. 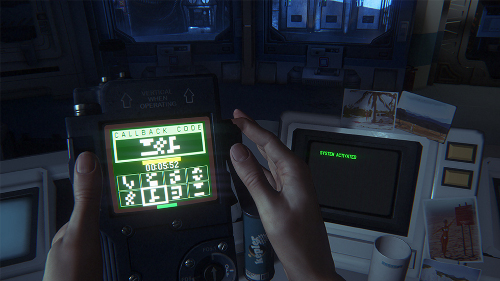 From what I played Alien Isolation is not shaping up to be scary. It holds a great art style, and it’s clear that the team behind it obviously love the seminal horror title. But by showing too much, and adding too many physical warnings of the titular sci-fi icon, this may be all for nothing.

It’s almost tragic in its irony. Aliens: Colonial Marines had a demo that was heavily criticized for not representing the final game. Now all I can hope for is that this Alien Isolation demo doesn’t either.

Shogun 2 gets a new addon next month