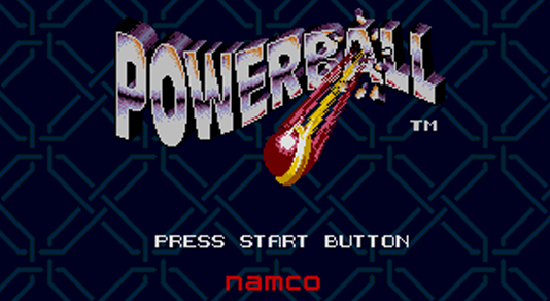 Nothing may be as pure as the art of sports.  Two teams locked in a duel, the only weapons being their bodies and their thirst for victory.  Nothing will bond a group together quicker than the sweat used towards the communal goal of victory.  As we are experiencing currently with the World Cup, a nation’s pride weighs on the shoulders of a few gifted athletes willing to sacrifice bodies and overcome overwhelming obstacles with unbound spirit, aggressive tactics, and sheer determination.   No game better demonstrates the undying force of willpower than Powerball, a mix of soccer (sorry…football), football (sorry…American Football), and rugby (sorry…punchy game) developed and published by Namco for the Sega Genesis in February of 1991.

The game opens with a cinematic of your athlete suiting up in the armor of Sparkster from Rocket Knight Adventures.  As the players take the field, a cheer is gushed from the most radical audience ever committed to sprites.  They want their warriors to battle, and battle they shall.

Three modes are available to choose from:  One player exhibition, two player exhibition, and one player league.  Eight teams are playable, each representing a different country.  I begin my league with the country that birthed civilization: Greece.  The Trojans are lead by Jack O. Nasty, the last name certainly shortened from Nastopopolus.

Before you begin you game, you are allotted fifty points to boost your team’s stats.  And your team’s stats are numerous.  Speed, Kick, Power, Stamina, and Acceleration are listed for each of your eleven players.  You will be bewildered by how many numbers appear onscreen. (Hint: just put all your points into Speed, otherwise you’ll never be able to get away from the other team and will hardly touch the ball)  Once you pump up your team, you are ready to hit the gridiron.   Each roster is filled with tried and true sports positions, such as Sweepers, Wingbacks, Halfbacks, Blockers, and Ninjas.  The Ninjas are the foot soldiers of offense lead by the General, whose sole job is to stand next to the goal and be useless. 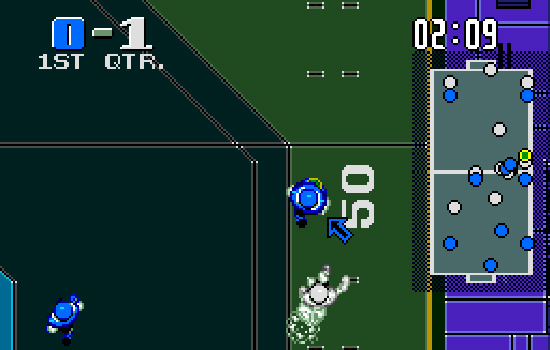 The game begins with a scramble, which is the first opportunity to hit your opponents.  When the game begins proper, you discover many more ways to pummel your adversaries.  Besides the Diagonal Pad, Powerball is a three-button game.  The A button shoots on offense/hits on defense, the B button passes and changes players on the field, and the C button does a special tackle.   Each button can be charged by being held down, making your attacks more powerful and sending the ball further.   An arrow indicating your player flashes until becoming a vibrating white, demonstrating full power.  Points are achieved either by throwing the ball against the goal board (1 point) or running the ball into the end zone for a touchdown (3 points).

Jack and the Trojans march onto the metal lawn sure of victory.  The Japan Samurais, lead by Killer Kenji, lay in wait silently, intensely.  The game gets off to a rocky start as the scramble leaves a majority of Greece’s starting offense writhing on the ground.  Killer Kenji jutted up the middle leaving the Blockers and Sweepers spinning.  Luckily, the Goal Keeper halted a fierce shot that seemed destined for the goal board.  The Goal Keeper made his way to the top of the box, swatting the ninjas down like honeybees, for the Goal Keeper is the only position that cannot be tackled.    After a charged pass up the middle, both teams struggled and attacked the ball.  Back and forth was fierce, neither team yielding an inch or allowing shots on goal for three quarters.  Then things turned ugly in the fourth and final quarter.

The Trojans pulled our all the stops in the closing minutes.  The lack of referees or any penalties for violence only enabled and emboldened the Greek team into more ruthless tactics.  Regular slide tackles were charged up into spinning clotheslines and corkscrew dropkicks.  The thuds of fists against helmets made the field flash red and white.  These moves left the Samurais stunned for a brief moment, whereas the fully charged pounce of a Special Tackle would render them useless for several seconds, sprawled on the field like road kill on a suburban street, given the pancake hairdo by a Subaru Forester on its way to Pilates.  In the closing seconds of the match, a well-placed pass by a halfback was turned into a powerful bounce kick by my ninja and ricocheted off the goal board, turning the score one-nil.  My team dog piled onto my weary bones in celebration.  As the clock wound down to zero, not only myself felt joy, not only my teammates, but without doubt the whole of Greece were elated by this triumph. 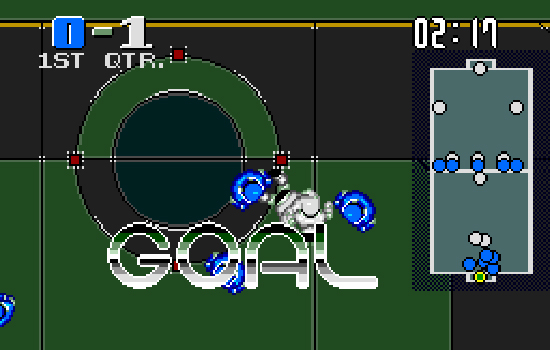 The graphics are fresh and colorful, holding up well and making the game treat for sprite fans.  Players have different body types making them easy to tell apart and the green and yellow ball doesn’t get lost in the madness.  When passing in the air, the ball gets larger hence closer to the camera.  This illusion of depth is clever, but ultimately frustrating when you think you are about the catch the ball and it slightly just floats over you.  The camera hangs overhead the person carrying the ball, which centers the action and imbues the ball holder with a certain gravity, making them the center of attack.  Something must be said of the team logos, ranging from silhouetted amazons to regal emperors to crusty pirates, this game makes combatants out of traditional stories and historical facts, though the Korea Warriors comes across pretty lazy compared to the Russia Cossacks and their captain, Gore B. Chov.

The Cossacks were the team that handed me my first loss and sent me flying from the league.  Luckily, a password system allows one to bounce back before the match and rectify any injustices.   Cossacks went down two-nil.  The dog piles continued into the night.

The music does nothing to cause celebration.  Essentially a few eight-count measures repeated with occasional flourish, it is dull, unexciting, and instantly forgettable.  Tackling is also problematic because of the randomness your target is chosen.  When going after a competitor with a ball, you often dive for someone else of the opposite team.  I first believed it was due to proximity, but after several thwarted steals due to sliding the wrong way when I was next to my intended target, I am forced to assume tackling opponents can be arbitrary and ruin field strategies and cost goals.  Team AI is also an issue.  The worst offense was when my Goal Keeper, the strongest and most important defender, was stuck behind a goal post marker, costing me my match against Russia.  (The goal posts act as boundaries to decide when shots are aimed toward the board or sailing foul)

The most damning factor though is its repetition.  The resolve to bash wears heavy on your helmeted head and the joy from winning the first match dissipates into boredom.  Each game is the same and nothing of note happens to separate them from one another.  Multiplayer does little to alleviate this.   Powerball quickly becomes an endless slide tackle, goal kicks blend into each other, and true excitement is found few and far between.

So after a harsh loss to the USA Rough Riders, the Greece Trojans were retired due to a sagging feeling of uninterest.  They didn’t return home to parades and floats surely as Dimitris Salpigidis and Vasilis Torosidis will for scoring Greece’s first ever World Cup goals.  There were neither banners hung from Doric columns nor fans blowing vuvuzelas.  There weren’t even any tears of regret that these young men were never to be fully utilized again.  There was only a sigh, and then a shutting off of a console.

Powerball went out with whimpering C+. 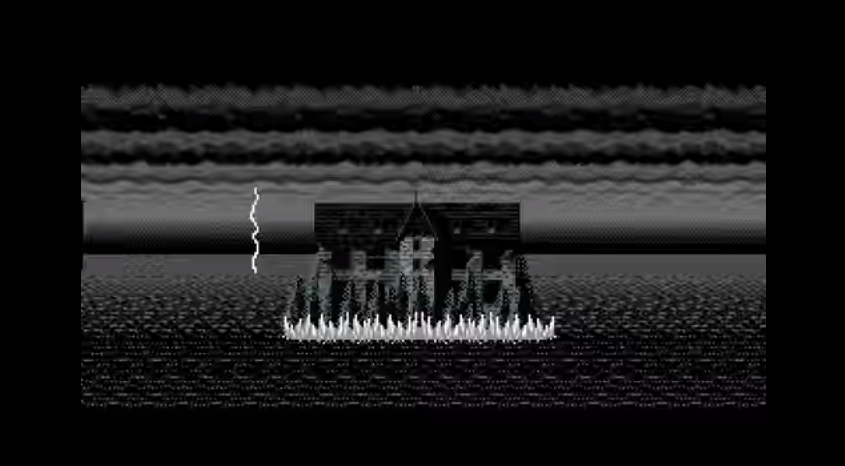