Mashing up 2D and 3D elements, Sonic Colors is giving the fastest blue hedgehog on the planet another romp on the Nintendo DS and Wii before the year is over. Sharing thoughts post E3, Spawnkill is already affirming that this title already appears to be heading in the right direction as far as Sonic fans will be concerned. However, such quality has been promised in the past on other Sonic games prior to release – after all, we heard this before Sonic: Unleashed came out and we’re horrified to spend levels as a Werehog catering to gimmicks that alienated loyal fans and disgusted potential new ones.

But apparently, this time it will be different and we have everything in the world to be excited about playing as Sonic on the Wii again, even after Sonic and the Secret Rings. Players will have to fill the speedy red shoes in an attempt to stop the perennial nemesis, Dr. Eggman from his continued enslavement of Wisps used to run an amusement park in orbit of Sonic’s home planet. As always, Sonic will need to use all of his skills to put his characteristic speed to it’s best use and save the day once again. 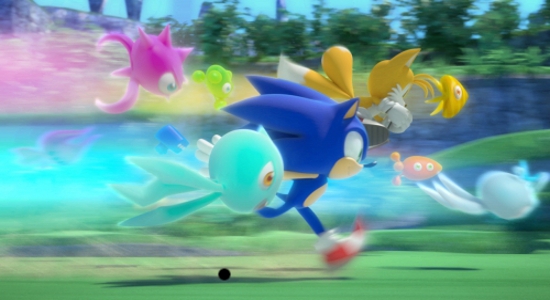 From the article, “The alien Wisps are scattered all over the levels and act as power ups to collect. The yellow one for example will give you the power to drill through dirt areas below you and you’ll go into this 2D style screen where you control Sonic on auto-drill, collecting rings or discovering secret areas, until you zoom out of the dirt. The music also changes to a really fun electronica bass-style when you waggle the Wiimote to use the yellow Wisp. Another one I found allowed me to quick dash and defeat a row of enemies instantly. When you find a new Wisp, it’ll replace the one you have on reserve so don’t hoard your power ups!”

While Sonic has made me more than weary in the past several years, this by far has to take the cake. Dr. Eggman, vile as he is having a space station and Sonic being roped in to stop him sounds more like a child’s take on Moonraker, the terrible James Bond film which attempted to cash in on the popularity of sci-fi at the end of the 1970’s. However, in the preview it is described not once, but twice by the author that, “Sonic Colors is definitely headed in the right direction” for one reason or another.

Sadly, as excited as I am about another Sonic game, I’ll be approaching this one with a significant amount of caution. No sense is expecting an amazing experience only to be blown out an airlock. Here’s hoping since Sonic Colors is currently slated for a late 2010 release.