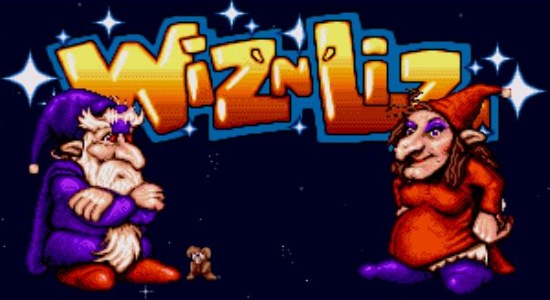 The Sonic Head-Jog is a weekly look back at the great Sega soundtracks of the past thirty years, from simple chiptune pieces to full-blown orchestral works. Where possible, Youtube links are provided throughout to let you hear the music for yourselves.

Some you will know, others you may not but whether we jog your memory or pique your interest in something you hadn’t heard, we hope to help you create the ultimate Sega play-list!

Bizarre Creations are probably best known to Sega Addicts for being one of the “second-party” developers during the Dreamcast era, producing the groundbreaking exclusive Metropolis Street Racer. It is less well known that Sega were partly responsible for the studio name back in the Megadrive / Genesis era. At the time of developing Wiz n’ Liz the team were known as Raising Hell Software, which caused a few raised eyebrows at Sega due to the word “Hell”. The game was released in 1993 with no studio name attached, prompting the change to Bizarre Creations by the time of their next release.

We will get round to covering Richard Jacques’ eclectic soundtrack for MSR sometime in the coming months, but for our first feature we are focusing on the music from the aforementioned and criminally under-rated Wiz n’ Liz. The game’s composer, Matt Furniss was one of the most prolific British musicians of the 16-bit era and produced over 50 soundtracks across a range of Sega systems. Wiz n’ Liz is one of my, and Furniss’ own personal favourites.

The game opens with a lengthy (for the time) introduction sequence backed by a melancholy hip-hop-lite track… Imagine Toejam and Earl busting out some Sesame Street tunes and you’re about there. The sounds used all seem to have effects of some kind; filters, phasers and delays appear to be used on the various synth pads and tones. This piece is Furniss’ opening salvo and lets you know that he is going to be squeezing some crazy and unheard sounds out of the humble YM2612 chip, almost on a par with Yuzo Koshiro’s finest works.

Upon starting the game proper, we find ourselves at the home of the titular Wiz and Liz which serves as a hub level to return to after each stage is completed. The music used must therefore stand up to repeated listenings, luckily the melodic tune chosen is catchy without being annoying and, like most great Megadrive/Genesis soundtracks, features sounds unique to the game rather than the”off-the-shelf” FM tones used in more generic titles.

After mixing a few fruit in your cauldron to create a doorway (don’t ask… :D) you are led to another hub level, set on a delapidated roller coaster. No music is used in this area but you can choose to play the levels in any order from here. 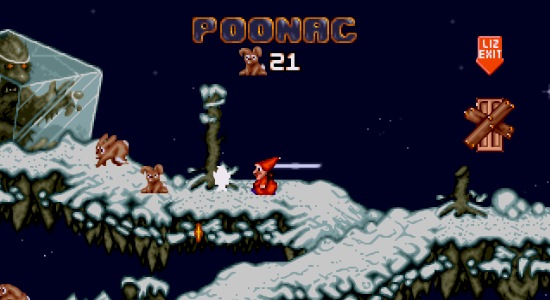 Poonac is the residue of coconut after the extraction of cocunut oil!

The upbeat ear-treats used for the levels themselves are more lively than the two previous pieces to match the frantic time-attack gameplay, and is somewhat reminiscent of classic Sonic music in style while having a European flavour all of its own. If I had to sum up these tunes with one word, it would have to be “bouncy”. The pieces boing about all over the musical scales and rarely fail to bring a smile to my face. My two standout tracks from this selection are the Latin-inspired Mine Land and bounciest tune of them all Grass Land but all are deserving of a listen and regularly find their way to my mp3 player (though back in the day, they were on the B-side of my homemade Streets of Rage 2 cassette!)

Depending on the difficulty settings chosen, you will eventually find yourself facing off against at least one of seven bosses (interestingly the only enemies in the game). Bringing a darker techno edge to the mix, each boss has its own theme and manages to sound distinct from the music in the rest of the game through the use of theremin-like sounds and tougher beats. I’d like to think that in another universe, Yuzo Koshiro made the chase music from Scooby Doo and that it sounds identical to the final boss music. The Savage Pumpkin is not only a thumping little track, but also sounds like it should be the name of the world’s worst industrial band. In fact, I will personally send a copy of Wiz n Liz to anyone who starts a band called The Savage Pumpkin and puts at least 3 of their own songs on a Myspace page!

Furniss saves possibly his best for last with the music for the high score entry screen, it reminds me of the closing music to to the excellent but now defunct Retroforce GO! podcast and sadly is not available in a video to link to. Hopefully this will spur you into trying the game for yourself to hear it, or at least downloading the soundtrack from the godly archive of Genesis/Megadrive music at Project 2612.

Bizarre Creations have made the game freely available from their website for use with an emulator and you can unlock the in-game soundtest by mixing two carrots in the cauldron. Oh and mix an apple and a banana while you’re at it too, this opens the fruit shop which will in turn enable you to buy a strawberry and a lemon and play the ambient chill-out non-game, The Color of Magic. As it’s free I can’t recommend the game highly enough, not just for the soundtrack but for the highly unique gameplay and quirky unlockable pastiches of retro tropes such as Pong and Space Invaders.

What is your favourite track from Wiz n’ Liz? And which Sega soundtracks would you like to see The Sonic Head-Jog cover in future? Let us know in the comments or the official forum thread.