The rest of the cover is straight bananas.

Wirehead is touted by many as being indescribable. Last week our very own Stevie couldn’t put this game into words.  In fact, he claims that nothing more can be said about the game than what he himself wrote. Naturally, I see that as a challenge. That’s right, I’m going to do the unthinkable. I’m going to talk about Wirehead.

Wirehead is notorious for its over-the-top, ridiculous story. It’s a full motion video (FMV) game so there really isn’t much to it other than its story, but what a story it is. Assuming you press the commands correctly the story goes as follows: You receive a package from some doctor you apparently know about how “they” are after both of you. Inconveniently, “they” seem to find you seconds after you watch the tape because a couple FBI agents show up at your house to bust your ass for something. Naturally you bust ass out the back door and escape on a skateboard. Eventually you end up at an airport where you jump into the baggage check machine to be checked as baggage. No one finds this suspicious and you make it on the plane, but shit goes down on the plane so you have to jump off with only a raft. How convenient, you land right in a river. Then after falling down a waterfall you get attacked by a bear. I timed this and it takes around 7 minutes for all of this to happen. If you skip the 2 cut-scenes you could probably get it to less than 5 minutes.

Um…what? Sure video games, especially those from the 16-bit era, aren’t known for realism, but this is fucking ridiculous. I bet no one reading this has ever had a single one of those things happen to them, let alone several in succession. The scenario here is completely unbelievable and everything that happens is a chance occurrence. Assuming that the character was about to get busted by the FBI, what are the chances that he would get away in the first place, on a skateboard no less, and then proceed to make it on a plane in an illegal way? Assuming that he made it on the plane, what are the chances that while jumping out he would find an inflatable raft and land in a river with a waterfall that a bear was drinking from? It’s bad enough that this is an FMV game, but when everything that happens to you is an accident, it totally undermines your feeling of being in control. 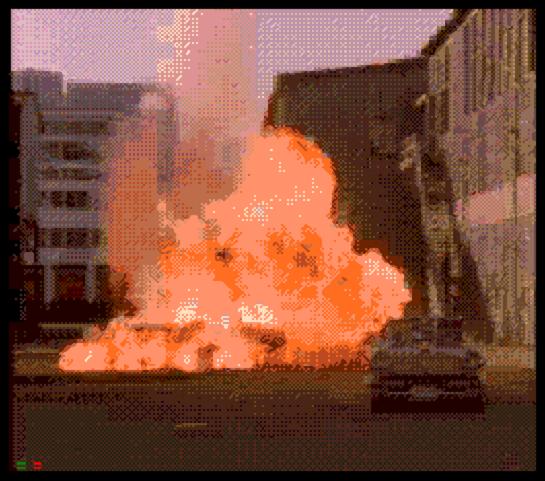 This is what happens when two cars crash right?

Maybe the developers realized this and decided to counter it by including multiple paths to take to the end of the game. You still have to do all of the things I mentioned, and there’s only one ending, but there are a few different ways to do all the stuff in between. That’s actually a pretty nice feature that adds some replay value, which is a very good thing to have since the game itself is so short. A problem I have with this is that it’s possible to make a choice and lose a life while still advancing the story. For example: you get into a bar fight not long after you get attacked by the bear, but there’s no way to win the fight, so you get knocked out and arrested regardless of what you choose to do. You lose one third of a battery (essentially one life; you get 3 batteries, that’s 9 lives), but you’re not dead and the story continues. Furthermore, you have to go to jail to advance the plot, so you will always lose a life there. The game literally punishes you for doing what you have to do. This isn’t the only time in the game where something like this happens either, but thankfully this is the only one that’s required.

Another big flaw in the branching path idea is that often there’s no way to know what consequence your actions will have, and there’s never enough time to logically deduce what could happen. For example, when you’re escaping on your skateboard at one point there are 3 options, one of which is a ramp. Logically I figured ramps and skateboards go hand-in-hand, so I chose that option and got plastered by the FBI agents’ car. At another point you can choose one of 3 getaway vehicles: an old-school wagon, a motorcycle or a Jeep. The wagon is the quickest path, but they all take you to the same place. Who would’ve figured that out? I guess you can counter-argue that simply choosing the most absurd option would be the best strategy, but it doesn’t work like that; most of the time you’re just running away from guys, and none of the options is particularly absurd. The game is really inconsistent in that way.

I’m not sure whether it’s the dialogue or the actors that are worse in this game. Just watch the first minute of this proper Shakespeare. Do you see what I mean? And hey, how about a plot-hole to top it off? At 0:54 in the video, they talk about a woman who’s with the two guys who are chasing you. They talk about how she wears heels, and Wirehead says that he’s seen them. The problem is this woman has not made an obvious appearance yet; so far only the two FBI agents and the Southern police guys have been chasing you. There haven’t been any women, except a woman on the plane who you wouldn’t suspect because she wasn’t hostile, nor did she seem to be wearing heels. She seemed to want to have sex with you. The only way to know about “Heels” is to die by going into the bathroom with her. Nothing happens with her heels—it’s implied that she cuts off your head like it’s a Greyhound bus or something—but the newspaper reads “Wirehead Loses His Head with ‘Heels’”. This has to be your 3rd, 6th or 9th death or else the newspaper won’t come up. Still, you would be dead, so while you, the player, would know about “Heels” Wirehead himself still wouldn’t. 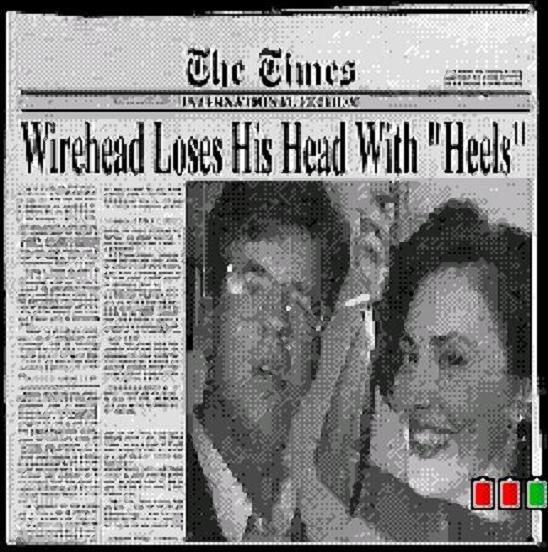 Good thing there was a photographer there.

The thing that bugs me the most about this game is that it’s really not a game. It’s very unfulfilling to sit and guess which direction to go in. It’s even less fulfilling to look up a walkthrough and go from that. I was playing off a walkthrough because I got tired of dying, but I found that instead of playing the game I would look at the walkthrough and listen for the sound. I literally played this game without looking at it. Now imagine how glorious this game would be if it were a real game. The first thing you do is speed away from FBI agents on a skateboard. Next you have to fight your way out of a plane, and then safely land in a river. Next up you have to break out of jail and escape from the FBI agents again on your choice of vehicle. Can you say “Game of the Genesis”? But it’s not a real game, it’s a movie that you can’t watch properly and it’s a waste of time to even try.

By the way, that surprise I mentioned last week that no one cared about is actually going to be next week, sorry!