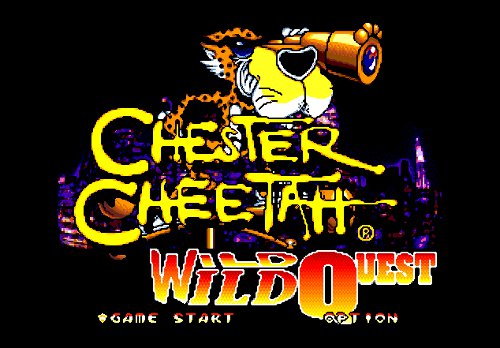 And now, for the sequel! That’s right Sega-addicts, if you don’t remember the garbage that I had to roll around in last week go ahead and check it out. Somehow the developers took a look at the feces that was that game and thought “yeah, that’s pretty good” and made a damn sequel. To the developer’s credit they did a much better job with this game, but it’s still not very good. So I guess you should grab another bag of Cheetos and read up on how this game turned out. Also get excited because one paragraph is a post-modernist/psychoanalytical description of something ridiculous. Aww yeeeeeeeah.

Before I talk about the game I want to spend a minute with the developers – Kaneko. So apparently these guys have quite the reputation over in Japan as being a developer not afraid to openly go where no one has been able to go since the 50’s: racism! Their game DJ Boy features many stereotypical black characters, proving that Japan just loves stereotyping and broad, sweeping conceptions of entire races of people. Please catch the irony there. As if racism wasn’t a bad enough thing to shove into our kids’ minds this developer’s main series of games, Gals Panic, is apparently equivalent to softcore porn. So you’re the Frito-Lay company, you check out this company’s portfolio and you’re faced with a choice: do we go with the racist pornographers or some other company that doesn’t specialize in those things? If this were a choose-your-own adventure book Frito-Lay would have arrived at the page that reads:

You just straight fucked up. Now you have a shitty game and no one is buying your crappy product. Have fun with your bankruptcy. END

Naturally, Frito-Lay would disregard this and let them make a second game.

To be honest though it immediately resolves many of the problems that I had with the original. The intro actually informs you about what the game is about (back to that in a minute), the ground is flat, Cheetos appear in the game, I can’t seem to find a guitar, shoes or glasses anywhere, it follows that you move at a regular pace for the whole game, there’s no overly annoying sound effects, enemies actually die if you jump on their head, and you don’t have to do anything arbitrary to complete a lev… oh wait, you totally still have to do that. 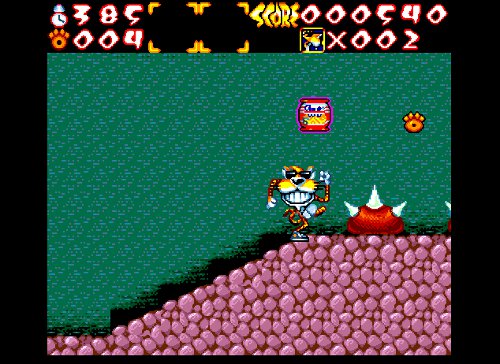 Great Scott, they DO exist!

So the goal is to find a piece of a map, similar to the last game where you had to find a piece of Chester’s motorcycle. You also have to proceed to the end of the level after you find the map; pretty straightforward, albeit unnecessary. The problem is the fact that you have to face a boss after completing a stage. I know that fighting a boss is standard procedure in most games, especially platformers, but after every level? It’s not like these levels are large either – the first 3 can be completed in under 2 minutes if you know where to go. Maybe this wouldn’t be such a problem if the bosses weren’t seizure-inducingly hard. I couldn’t even figure out how to hurt the bosses for the longest time, and when I did I noticed that they had been expecting this and had equipped their machines with incredible defensive mechanisms. The easiest boss that I’ve faced has an umbrella that functions as a spike, making it hard as hell to hit her. She is the only boss I encountered who doesn’t use projectiles. One boss shoots out bombs when you hit him, which would be bad enough if they just exploded to hurt you, but simply being hit by one on it’s way down is enough to do damage, and since he throws them approximately half a second after you jump on him it’s incredibly likely you will die. I tried so hard, but I could not beat a single boss in this game. Luckily the game gives you a choice of three stages right from the start so I have a generally decent idea of the game as a whole. 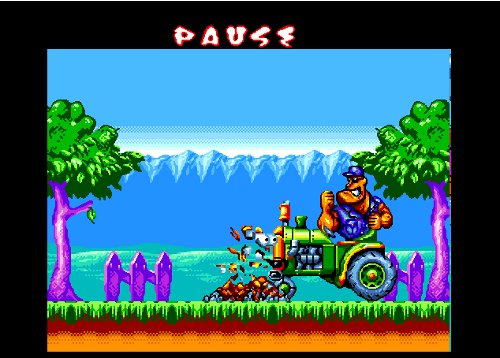 It involves a lot of death. This is the boss that throws bombs after a hit by the way. As you can see, I was unable to hit him.

Also, for some reason you went from having 4 hits in the god awful game to having 1 hit in the still-shitty-but-not-as-bad game. That is, unless you have Cheetos. Cheetos, as I mentioned twice now, are actually in a game that is selling them. I can’t believe they fucked that up last time. They are actually also the most useful thing in the game. This is helped by the fact that everything else is virtually useless. Cheetos give you the ability to come back to life after you are hit a single time. I don’t know why the developers chose to give you 75% less health in this game, but whatever at least it makes the Cheetos useful. I do have a problem with how they work though: when you are hit you still go through the death animation, but then you are resurrected, you eat the Cheetos and finally you’re back in the game. I don’t see why the gameplay has to be broken up so badly like this. Why can’t you just lose the Cheetos when you’re hit and have a constant flow going? It’s a huge pain in the ass.

On that note, let’s focus back on how badly this game sucks. Though the game tries to fool you into thinking it’s good, you can tell from the start that it won’t be. How can this be possible, you might ask – the introduction! Remember the intro last time around, it was about 20 – 30 seconds and told us absolutely nothing. Well the developers must have realized their mistake so this time you get one that’s almost 2 minutes long and tells you fucking everything. Check it out:

Just…why? This intro doesn’t leave anything to one’s imagination. It tells you the story (sure, that’s a good thing), it introduces you to the antagonist (fair enough), it describes the non-linearity of the game’s level selection (ok, that’s nice), it informs you of a special ending (that’s good to know, but I don’t really see why it’s…), it tells you exactly how to get that ending (well it’s not really a secret any…) and it does it all in a cheesy 1990’s suburban white-boy rap style that is as painful to read as it would be to listen to if someone were to actually rap it out (that sounds like a huge pain in…) and it’s set to music that sounds more like something between blues or jazz than a “dope beat” suitable for a rap song (wtf?). So the developers where still high when they made this game, at least they seem to be doing less drugs now.

On the whole this game is a lot better than Too Cool To Fool, but it’s still nowhere close to being a good game. Unlike the first game this one actually feels like a typical video game. That being said there are far too many problems present for it to be a decent game. The bosses make the game basically unplayable, and I can’t imagine how one could have enough motivation to develop enough skills to actually beat one of them. Thankfully Frito-Lay must have learned their lesson as they never again made a Chester Cheetah game. Unfortunately, other companies weren’t so wise…

Poll Results: What is the best 2D Sonic game?