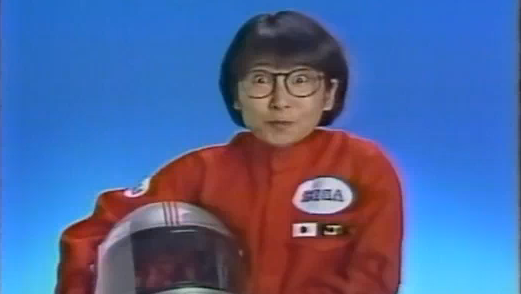 In writing these columns every week, I watch a whole lot of SEGA commercials. Until now I’ve almost entirely focused on American ads. Every week I seem to bitch about the same things like the adverts just being someone screaming gibberish at you over clips from the games. So, this week I figured I’d check out the ads from Japan. Such a disciplined society that takes gaming and tech seriously would approach these ads with maturity and class. They HAVE to be better, right?

At least I could tell what the games were about in the first ad. The girl was wearing racing gear because it was a racing game. So I guess this game is about… forearm hygiene? Why does that require a keyboard? The only peripheral this guy needs is a pencil to bite down on so he doesn’t swallow his tongue during this seizure he’s having.

Whoa, I think I got a contact high from whatever the hell the two guys in the last ad were huffing. Japanese ads always have a cool dance number, weird imagery and stop motion animation. We just had dicks in tie-dye doing kickflips. Does Sonic ever do the running man on top of a convertible during a parade at night in the game? No. Do I give a shit? Hell no. We need ads like these in the US.

Here’s another ad for a racing game and it may be my favorite ad ever. Whereas most commercials would pimp state of the art graphics or multiplayer, these guys could NOT be more proud of the ability to do a wheelie. Did you see that fucking guy jump? But, did you SEE IT? You’re gonna lose your shit at the tune up level. They tune it all the way up. I wish I could frame this ad and hang it in my house.

This last ad was made by SEGA to market the Mega Drive to the severely untapped Martian market. It also doubled as a pitch to the Japanese government to kickstart the colonization of said planet. After this campaign, tons of companies like Toyota, Sony and Subaru sold products to the Martian natives to gain their trust before the rape of their civilization and terraforming of the entire planet. That’s how Mars became the NuMars Shopping Mall.

That’s Radvertisements for this week. Let me know what YOUR favorite SEGA ads are in the comments and the forums. And remember, Genesis wheelies what Nintendon’t.