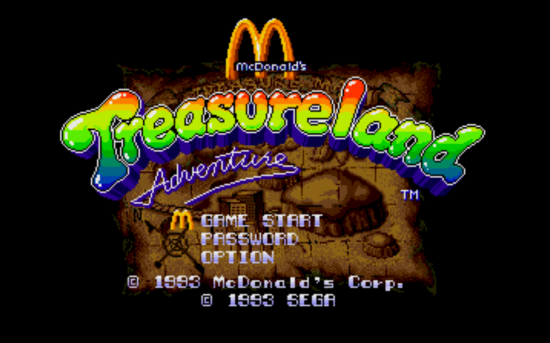 In-between generating brilliant, though sometimes how-you-say batshit crazy new properties, Treasure needed some way to pay the bills. Occasionally they would make games based on preexisting properties like Astro Boy or even Tiny Toons, long after the show had ended. You can’t blame them, we all gots ta get paid, right? But sometimes even the most ridiculous of intellectual properties would get a videogame.

Turning a movie or cartoon into a videogame is obvious, but a fast food chain? I guess it makes perfect sense when you think about it, who likes McDonald’s? Fat children. What else do fat kids like? Videogames. 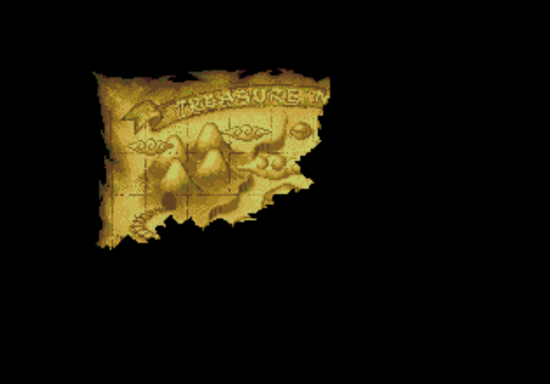 In McDonald’s Treasure Land Adventure one day Ronald McDonald is taking a stroll about his kingdom when he discovers a piece of a map. Of course, if there’s one piece, the rest must be somewhere. So after taking a frankly INSANE leap in logic, Ronald takes off on an adventure to find the rest of the map knowing absolutely nothing about where it leads, where it came from or where the other pieces might be. On his way, Ronald uses magic missiles to destroy every living creature that crosses his path. It’s brutal honestly. In one hit these blasts of pixie dust or whatever completely devastate any one he sees. It’s like playing GTA after dropping 3 tabs of acid and jumping into a ballpit. To be fair, many of them look like this: 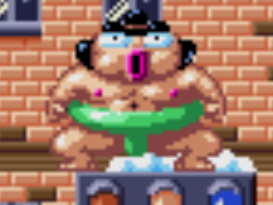 Being that the place is called McDonaldland, are we to assume Ronald is their king? Would this make him some sort of malevolent dictator? Some of the enemies are even humanoid. Ronald also uses some of them as a means of conveyance to collect items and pass obstacles. Ronald McDonald is truly a manipulative bastard. 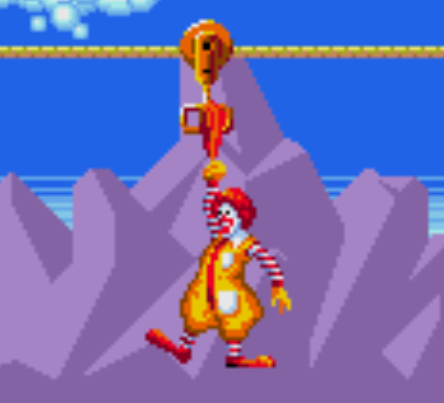 Aside from the magical rocket launchers, Ronald can repel up hooks and platforms with his jaunty scarf that he keeps hidden in his sleeves. This mechanic makes the platforming pretty fun and helps set the game apart from other adventure games from that era. It also helps reinforce the whole clown motif.

The first world starts out pretty generic-platformer-y with a Green Hill Zone-type stage but still has a lot of that Treasure flavor. It feels like a level ripped out of Dynamite Heady and the graphics are much more impressive than I’d expected for a game based off a fast food franchise. Ronald reaches a small, unpassable hill that opens up to reveal a tunnel leading underground. Thinking nothing of this, he ventures inside before the hill reveals itself to be some sort of ancient dormant beast. 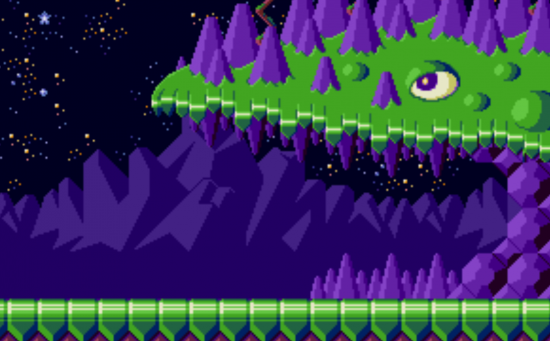 You’d expect this to play into the story in some way. Maybe the level would be based around organic enemies and scenery. The world itself could BECOME the boss. Nope, it’s never mentioned again. Then the level looks like this! 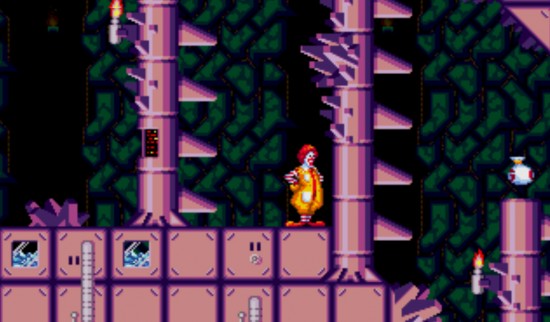 It’s like Dr. Robotnik’s rec room. Even odder is when you reach the Hamburglar. Not only is he inside this giant underground beast but it looks like he lives here. 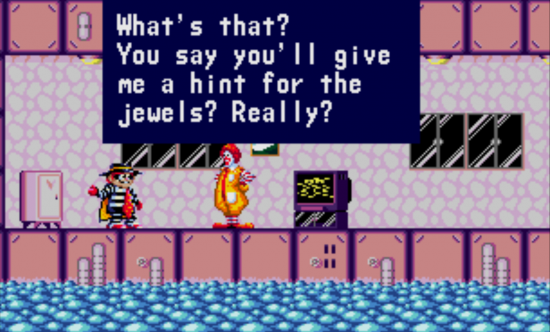 This is the first time the health system bugged me. In this odd twisted world, the gems Ronald picks up not only serve as his health, but they’re currency. Is this some weird commentary on money equaling life or something worse? Hamburglar has some information that could help you on your adventure but he isn’t just going to give it up for free. In exchange for the hint, he requests two of your jewels. Now remember these jewels are your health. Hamburglar is basically saying, “Oh I have the information you want and I can give it to you. …cut yourself.” This is like a decision you’d make in Heavy Rain.

The jewels aren’t hard to replenish, though. They’re everywhere. For a Treasure game, McDonald’s Treasure Land Adventure is super easy. You can even find them in shops and through a minigame that looks veeeery familiar. 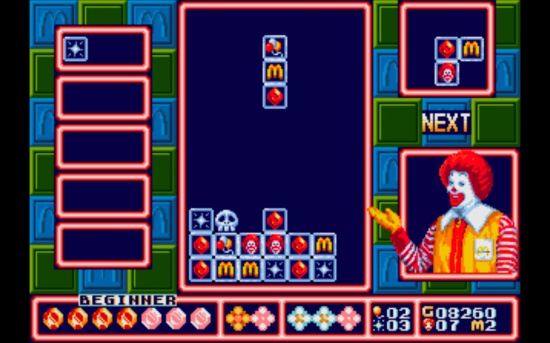 And the game just gets weirder from here on out. The hint Hamburglar has for you is about the boss fights. When fighting a boss they will vomit at you like so:

This torrent of bile acts as a tractor beam for Ronald’s jewels, as they’re eating the jewels the bosses become vulnerable to your attacks. Yes, you have to bleed yourself to distract the villains. The next level takes place on a circus train. Are there any more trite video game themes than trains and circuses? There’s even a minecart set piece. But Treasure finds a way to freak you out with it any way. The villains are circus based which confused me. Aren’t these like Ronald’s brethren?  Why am I fighting other clowns? Some of them are helpful, though. Like some trapeze artists who toss you across platforms like the monkeys in The Lion King or these dancers that help you get from train car to train car. 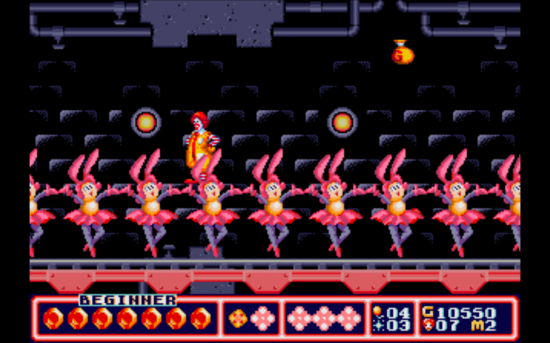 On the train, Ronald finds another of his friends. This time it’s Birdie. 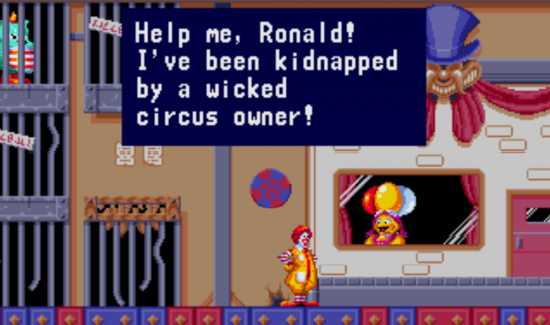 It isn’t explained why she’s captured, I assumed it was because of her freakish appearance until I actually met the guy. 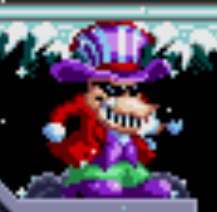 Check out that hat, that coat, those shoes, that mustache. This man is no circus owner, he is obviously a pimp. Birdie was captured to be whored out on the road, either to hitchhikers, potential circus philanthropist benefactors, or to keep the crew happy on long tours. And of course to save her, you need to hurt yourself again. This time it’s to help her pick the lock. I don’t know what spilling your own blood has to do with that. I think self-inflicted pain just turns her on enough to want to escape. Frankly, each of these scenes reminds me of that part from that Friday the 13th movie where the bounty hunter makes that guy let him break his fingers as payment for information about Jason. No children’s game should make me think that.

This happens one more time before the last boss when you meet the Grimace. His excuse is the worst of the three. 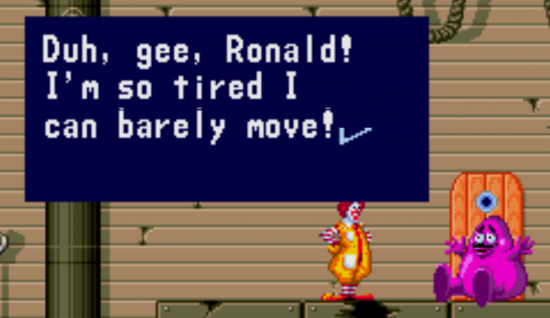 You REALLY can’t move your fat ass out of the way of that door unless I slit my wrist? I’m trying to find some freakin’ treasure here and bring happiness to McDonaldland. After the giant-fat-tuboflard-jackass moves you fight what seems to be the final boss, as there is only one piece of the map yet. But NO! After the fight Ronald pieces the map together and it turns out that it’s not a map of McDonald land at all. The treasure map transforms before Ronald’s very eyes into a map of some unknown planet, because that’s what happens when you put a map together. I’m sure we’ve all been 3 days into an epic road trip only to find out you weren’t driving toward the Grand Canyon at all but the third moon of Saturn.

So Ronald and his “friends” visit the Professor to borrow his rocket and head to their destination. This was a bad idea on the Professor’s part as they immediately fucking crash it when they land. 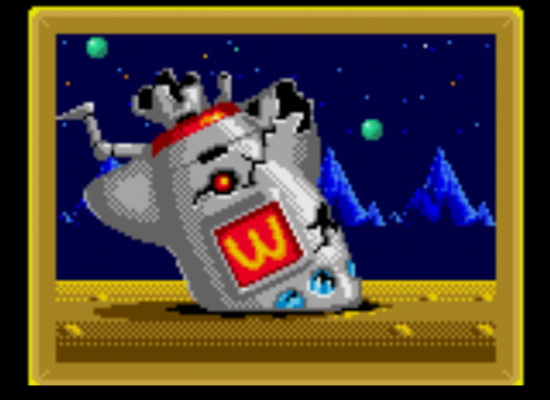 So Ronald sets out onto the final stretch of his journey across the twisted, colorful landscape of whatever the hell planet this is. Along the way fighting weird little aliens that poop bullets and- wait a minute. 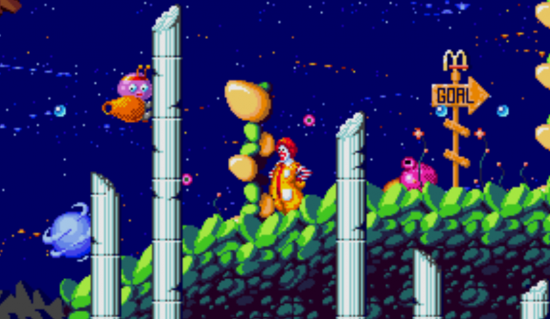 Is that the Saturn logo?

After defeating the last boss, Ronald finally finds the treasure he seeks. And it turns out to be a rainbow that transports Ronald and his friends back home to McDonald land. 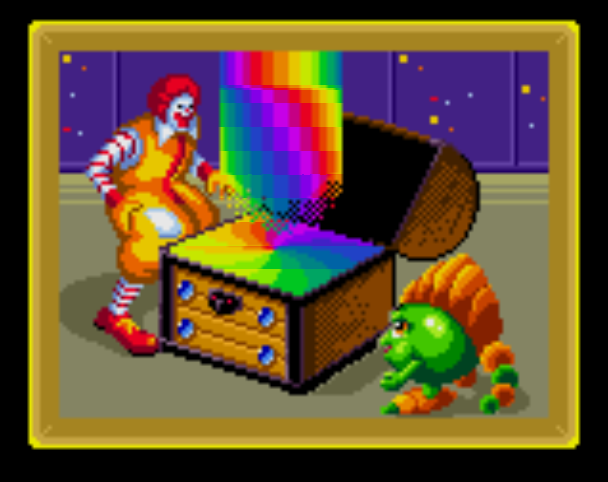 So… the treasure was… a ride home? I went on this epic quest to end up back where I started. Is this a commentary on macguffins in videogames providing no real prize at all as at the end of any game I’ll still just be me on my couch holding a game controller in my same crappy life in the real world? Oh nevermind, it’s just retarded. 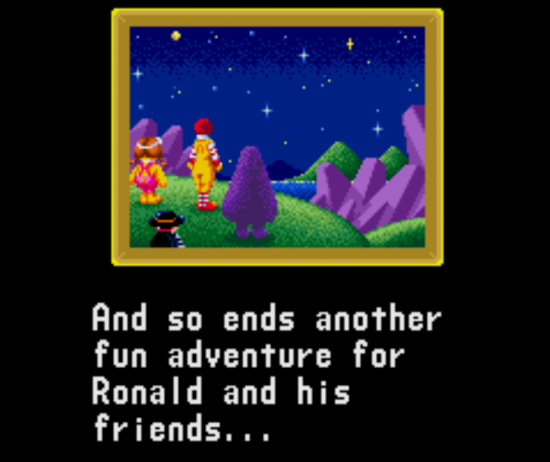 All in all, McDonald’s Treasure Land Adventure is a super trippy game with some interesting segments that turn platformer conventions on their ear. I actually recommend playing it at least once. For a Treasure game it’s super easy and really short so if you have a free afternoon, a Big Mac and maybe some E, pop it into your Genesis and have a weird experience. 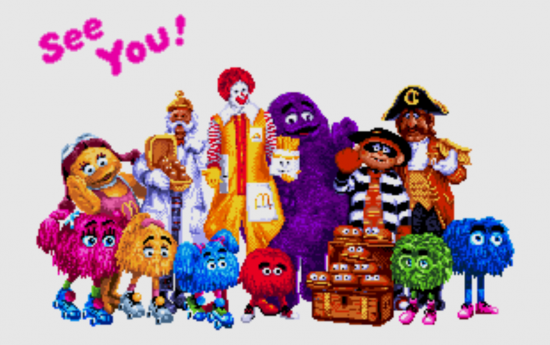