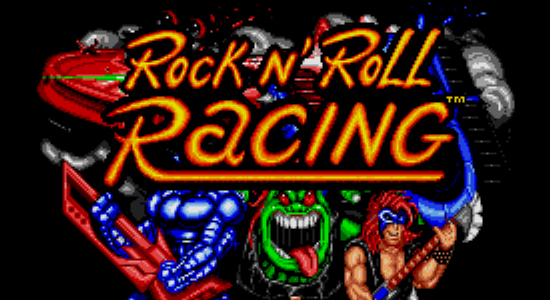 SLIME MONSTERS AND AX GUITARS THIS GAME IS AWESOME ALREADY.

To think today that there was a time where Blizzard wasn’t some mega corporation rolling in the dough after creating the world’s most successful birth control products… Or that there was a time when nearly every racing game didn’t have some sort of star-studded soundtrack… It’s kinda amazing how time flies, isn’t it? I could almost guarantee you 75% of the people going to the upcoming Blizzcon don’t even know what the company’s first real, non-port game was.

But that’s what I’m here for at the magical murder lab that is MegaDriving HQ. To educate you all about old, obscure games that involve little more than holding A and left, but actually have a neato significance to stuff today! And yes, in terms of the current PC gaming landscape, this one is actually quite significant. 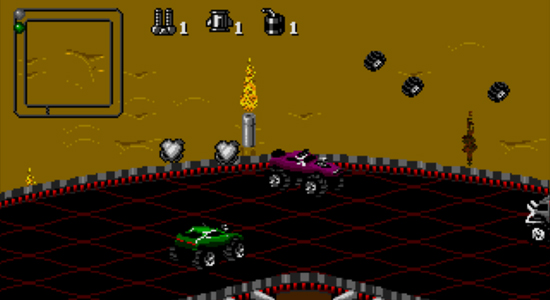 So, like I mentioned before, I can pretty confidently assume (and do correct me if I’m wrong) that most, unless they’re trivia nerds like myself, don’t really know what Blizzard’s first game was. I’d say most would answer with the first iteration of one of the “Big Three” RPGs the company has done. But weirdly enough, Blizzard’s first game was a 1991 racer for the SNES called RPM Racing, a far cry from what they’re famous for now, which got a decent enough reception to warrant a sequel on the SNES and our beloved Genesis. Originally developed under the name RPMII, Rock ‘n’ Roll Racing was released in 1993 as the third original title Blizzard (under the name Silicon and Synapse) ever released.

So, by ’93, you could pretty much say racing games were a dime-a-dozen, with at least one to suit anyone’s tastes. You had your F1 “sims”, your single manufacturer licensed racers, several arcade ones, and the list goes on and on. Basically, to stand a chance in the market, you had to do something unique, and that’s what Blizzard tried to do here. In addition to the sci-fi style, top down view of the action, and emphasis on combat, they decided at the last minute to add in licensed classic rock tunes as the soundtrack. Keep in mind, again, at this point licensed music was a rarity in gaming. Sure, you had occasional uses, like Spy Hunter using the infamous Peter Gunn Theme (which shows up in this game too), but it was never as widespread as it is today. And the idea seemed to pay off, with the game becoming one of Blizzard’s very first successes on their way to becoming what they are today. 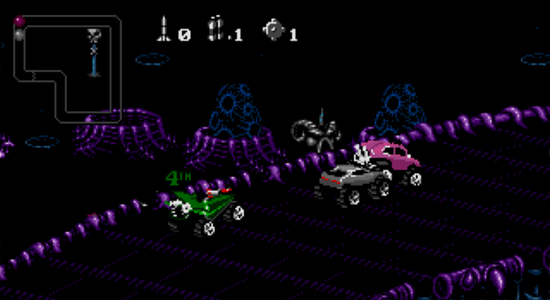 So, uh, how did I play this game back when I was little without getting nightmares?

So, graphically, it’s just very… meh, to be honest. It didn’t look that mind blowing back in the day, despite the really unique track environments, and it’s not exactly great now either. But it certainly wasn’t bad either, and it still holds up well enough to not be an eyesore now. Combine that with a clean interface (despite the reeeeeeally lousy character designs) and a unique (as most games had gone to a bumper view) but well done camera, which my only complaint with is I wish it were a bit more zoomed out, and that’s about all I can really ask for. It’s passable, and that’s good enough for me.

The controls are a little overly sensitive when it comes to steering (it’s pretty much INSTANT DORIFTU!!!, and letting off any in the corners does more harm than good in this game), but aside from that, no real complaints there either. The AI is decently fair on the two difficulties I’ve played on, and the track layouts are fun, although a bit repetitive. Some of the later ones could’ve also really benefited from a zoomed out camera, as mentioned before. But overall, the playability of the game gets a thumbs up, which makes my inner child so so happy.

As for the game’s main selling point, the sound… Effects are pretty bland, to be honest. Engine sounds, as expected, were left out as to not interfere with the music, and the weapon effects were just very… uninspired, I guess would fit? Just not alot of effort put into those. However, the announcing (done by motorsports announcing legend Larry “Supermouth” Huffman) is decent without ever getting too grating, and the most important part, the music, is very well done. Who knew a chiptune version of “Highway Star” could make me so happy? Definitely a thumbs to the sky for that. 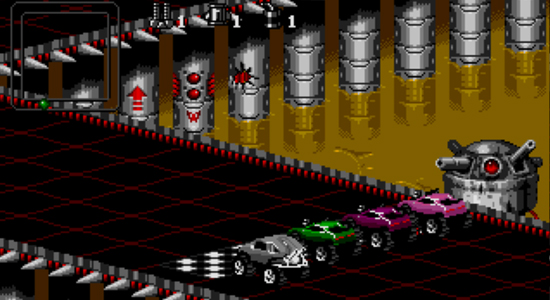 LET’S GO RACING IN NEW JERSEY~! (I swear I

So, as for its legacy, other than the early fame it earned Blizzard and being one of the first games (to my knowledge. Again, correct me if I’m wrong) to have a fully licensed soundtrack, there’s really not much to be said. A port to the GBA was made in 2003, and a sequel for the PS1 called Red Asphalt was released in 1998, but as I haven’t played either, I can’t really weigh in on em. I have heard that RA was nowhere near as good as its predecessor, though, so buyer beware, I guess? As for re-releases and such, I don’t see it happening aside from the aforementioned GBA version. Relicensing the songs would cost a fortune these days, I’d say, and really, the main novelty of the game, having those licensed songs, really doesn’t hold up in this day and age when 8 out of 10 games usually has a licensed soundtrack, especially in the racing genre.

But for what it’s worth, it’s still a decent little game, with a great deal of fun to still be had with it. I went into this article fearing that it wouldn’t live up to the fun I had with it back when I was a kid, but I can safely say it still passes with flying colors.

And again, that’s all I can really ask for. 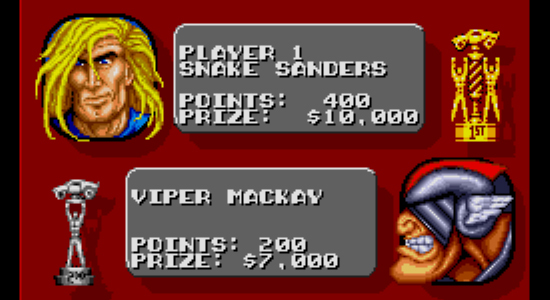 And that’s another column in the books. As always, I welcome and completely encourage any feedback or requests for games to be featured in future editions. (I’ve got nothing planned til the week of November 2nd, so anything you’ve got, just throw it at me!) Just leave it here, or post it in the forum thread. Thanks for reading, and I’ll see you beautiful people next week.