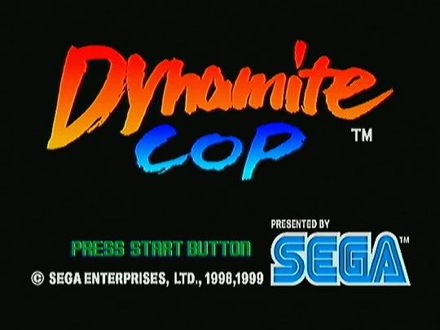 Beat em ups were a dying breed during the Dreamcast’s life cycle.  AM1, the developers of Altered Beast and the House of the Dead series, must have know this and decided to pack one last big bang into Dynamite Cop.  Published by Sega, Dynamite Cop features the most amount of absurd amount of imagery into a beat em up ever.  We’ll maybe not counting Streets of Rage 3.

If you’re trying to follow the story, just stop.  It boils down to you are a badass who fights terrorists.  Let the other details just be delicious sprinkles on a basic cupcake.  Why is a clam headed leader looking for some girl? It’s the President’s daughter, duh!  Why does she hide in a pink suitcase in his office? Um…why not!  Why does he bring the pink brief case with him when he doesn’t know she’s in there? To use as a chair of course!  Yeah, this game is ridiculous, but treat it like a nice day at the beach.  Relax and all will be good.

The game has the best use of quick time events I’ve encountered, mostly because the story can’t get in the way of your enjoyment of the cut scenes.  There’s also a big CAUTION warning, letting you know to put down the soda and once again pick up the controller.  It’s also pressing one button and not a sequence, quite practical.  The events also aren’t necessary to complete, but they will make things easier.  When accomplished, your character usually jump kicks a baddie out of the way.  If you goof up, you’ll have to fight a few more guys, usually tougher ones. 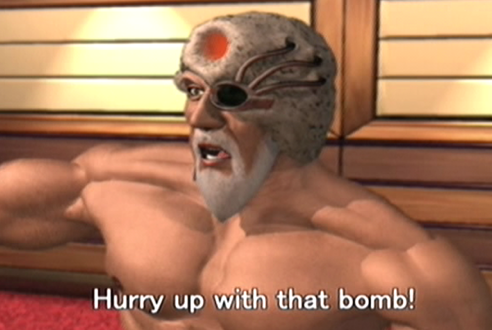 The bad guys are insanely dressed.  You have your standard thugs, leather-clad babes, and guys with Mohawks and Uzis, but you’ll also be challenge by men dressed as turtles and lobsters, skeletons witch doctors, and enormous chefs.  The main enemy has an oyster shell attached to his head with a laser eye.  I guess he makes his underlings wear similarly odd attire.  How else would you keep moral high?  When you getting beat up, your clothes start to disappear as you lose health.

One of the weirdest moments occurred when I entered the enemies’ island base.  You wash up on shore outside some shanties, when the camera cuts to a purple bird/lizard thing that clucks like a chicken.  For no reason!  It has nothing to do with the narrative nor do you fight it.  I guess it sets the mood that these are real bad dudes.  “Whoa, watch out for these hombres, they raise mutant chicken monsters.”  What the hell! 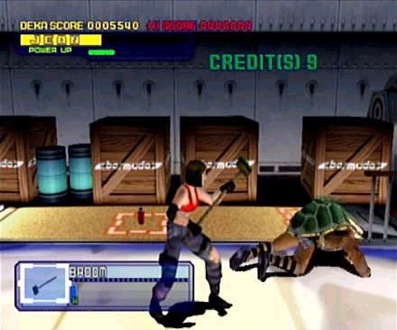 You can choose one of three characters: Bruno Delinger, Jean Ivy, and Eddie Brown.  All of them are imported straight from 1993.  This game is the sequel to the Die Hard arcade, so I can’t help but think Bruno is a stand in for Bruce Willis.  Bruno is a nickname for the actor, even naming his debut album The Return of Bruno (How is a debut the return? Whatever).  And he has a monkey on his shoulder, similar to 12 Monkeys.  Ps remember the 1995 Academy Awards when 12 Monkeys was nominated for best costume design and they had that big bubble suit walk down a runway?  That was awesome.  Anyway, the characters play very similar because of the control scheme. 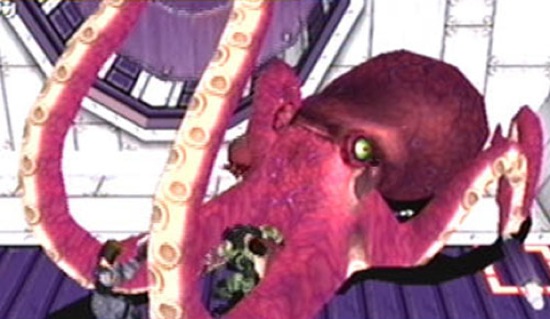 Dynamite Cop wears its beat em up heart on its sleeve, and its controls are the bare necessities.  Punch, kick, jump, and that’s it.  You can also pick up items, dash, and escape from holds by combining buttons.  The game keeps the variety of strikes fresh despite the lack of numerous attack inputs.  Spinning dragon punches, drop kicks, slide kicks, round house kicks, grapples, back breakers, neck snapping and jabs keep enemies on their toes and then on their backsides.  Weapons expand your assault library a few volumes.  Swords, banquettes, spears, and other long weapons are great for dealing with multiple foes, large, one use objects like crates and chairs take down enemies quickly, guns and lasers blow through crowds, and some are just fun to use.  For instance, one of my favorite weapons was table pepper, which can be used to stun an enemy and prepping him for a series of kicks that could only be called demonic.  Wait a second; I forgot about the Stinger missle you can use to create a nuclear explosion.  Yeah, the missile is my favorite.  You can also collect S-Power ups to become even stronger and kick even more ass than before.

The cinematic sequences are well enough done for the Dreamcast, but the little girl at the end is so creepy. “Thank you for saving my life again,” she states as she come towards your, hands and face curling like the witch from Snow White.  Then the end screen is a wooden crate bobbing in the water like theres no tomorrow (ie lots of bobbing action) with GAME OVER scrawled in red on the side.  Only when you see this will you ask yourself, “What just happened? Did an oyster headed pirate just send his ninjas and lobsters to kidnap the president’s daughter?”  Well, you’ll be happy to realize that exactly what’s happened.