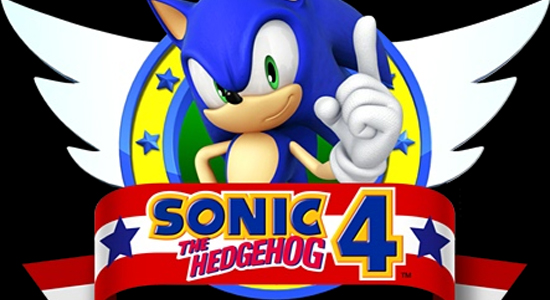 In the Sega community, Sonic the Hedgehog 4 is kind of a big deal. It’s not because it’s a new Sonic game, as several of those come out a year to little critical acclaim, but rather Sega’s claims that Sonic the Hedgehog 4 is a game that goes back to the series original style. No flashy 3D graphics, no sidekicks, just Sonic and a single button to jump and spin.

With Sonic 4’s release it doesn’t seem right to just have one Sega Addict review the game. We’re probably all Sega Addicts partially because of the time we’ve spent with the original games and we all have something to say about Sonic’s most recent attempt to return to greatness. Reviews from other outlets have been all over the board. Some praise the game as being the best Sonic game in recent years while others were left with a bad taste in their mouth.

What do we think? I guess you’ll just have to read on to find out. 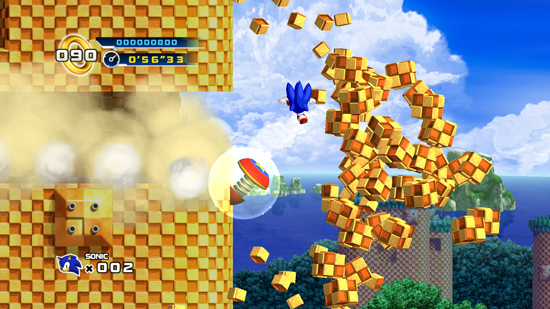 Sonic the Hedgehog 4: Episode One is easily the best Sonic game I’ve played in the last decade. Where many recent Sonic games show potential but suffer from poor design decisions and cheap deaths, Sonic 4 excels at keeping things simple and true to Sonic’s roots. The feeling of “hold right to win” that was present in many of the Advance and Rush games is now gone and Sonic 4 actually feels like a platformer again. That doesn’t mean the speedy parts are gone but they now act as rewards for successful platforming just as the Genesis games did.

The addition of the homing attack feels right and makes Sonic 4 play just differently enough for me to respect the “4” at the end of the title. Not only does the homing attack make chaining combos feel great but it also provided the designers with another way to create different paths and challenges throughout the level. It doesn’t make the game too easy either as there’s often times when it’s better to hit your target the old fashioned way as with every homing attack Sonic is flung back a few feet. 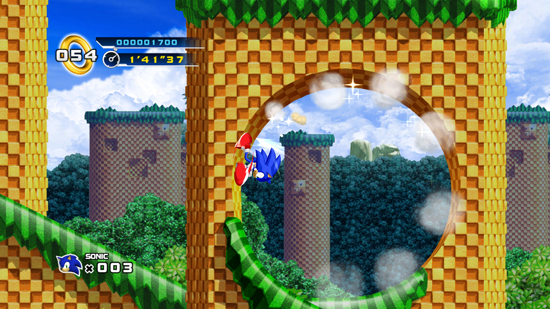 The first episode of Sonic 4 isn’t completely perfect though. For one, you’ll see many familiar sights from past games. All four of the zones are based on previous zones in the series and although they’ve been redesigned and given a fresh coat of HD paint it still would have been nice to see something brand new. There’s also a couple of overly frustrating moments that not only make you want to give up but feel completely unfair and out of place. The level design overall is quite good and consistent which just makes it even more frustrating when you reach these poorly implemented areas.

Overall, Sonic the Hedgehog 4: Episode One is a great return to form for the Sonic series. It plays more like the Genesis games we remember than any game since and it’s apparent that Sega has really taken their time crafting something they can be proud of. It’s not perfect as I would have liked to see a few more new ideas and zones and the game is over pretty fast but these are hopefully problems that will be remedied in the next episode. 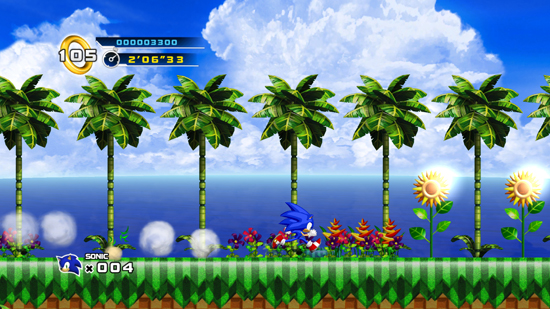 This was always going to be a game that everyone would want to put their opinion forth on, so I’ll try to be brief. I would without a doubt say you should buy it, as if you’re anywhere near this site right now you’re guaranteed to be interested in it, and if you perceive any faults in the game then that raises a lot of interesting questions about what exactly people enjoy about Sonic games, especially in regards to the 2D iterations.

The level design is great, with some interesting areas mixed up with a variety of on-the-fly puzzle solving and risk and reward exploration. Easily my favourite zone was the Casino Zone where you could discover patches of cards that sonic could ride around on as a linear shortcut, also showcasing the interesting advantage of the new visual style. Sonic is of course no longer a 2D sprite but a 3D model, which provides a fantastic boon in that the character isn’t simply mirrored depending on what direction he’s pointing in. Instead you can view the same animation from an entirely new angle, a feature prominent in both his characteristic idle animations and the card-flight sequences, which allows for a seamless scaling for the character when he moves closer or further away the camera. 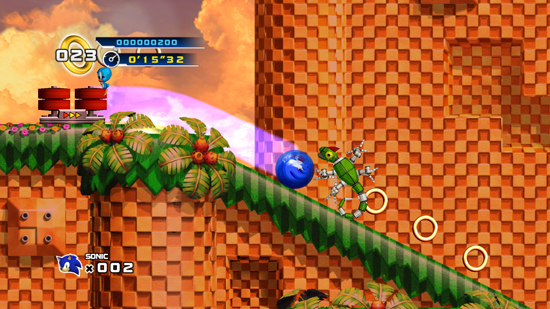 A lot of criticism has fallen at the game for players having to repeat levels again and again in order to actually maintain speed throughout it without stopping and getting injured for lack of knowing what was up ahead, but honestly this is the exact same situation I remember finding myself in for the original sonic games. For me it is the idea of finding my perfect road through the level and then trying it over and over until I nail it right that I really enjoy about the classic games, and the added homing attack and general physics overhaul do enough to give me plenty of options on just how to do that. I’m not enamoured with the soundtrack,but the overall soundscape is appropriate, always evoking the fonder memories of Sonic’s career. It might not be his finest hour, but if you were ever a fan of the famous blue blur over the past twenty years or so then there’s no way that at least seeing his latest effort in full isn’t worth your money. 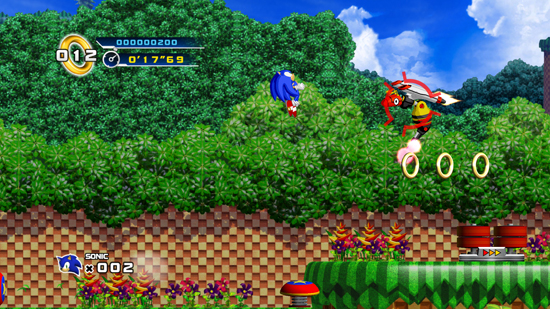 I can’t tell you how excited I am to tell you that all of our concerns and complaints for Sonic 4 have been almost embarrassingly inaccurate. Every second of Sonic 4 is one word in a massive love letter to the classic 2D games of our youth. Everything in this game, from the classic “ SEEEGAAAA” blue over white splash screen, to bonus stages lifted straight out of Sonic 1, to the panicked underwater bubble-breathing of Sonic 2 and 3, to a greatest hit compilation of Robotnik battles from every game in the original series

(I won’t spoil the final battle for you, suffice to say I am incredibly satisfied with the obvious nod to the fans), is an emphatic explanation from Sega stating, “Seriously, we have been listening”.

That being said, I have to say that Sega is devoted to this homage almost to a fault. Don’t get me wrong, though, I appreciate even the subtlest references in this game (there’s even a sound effect from Sonic Adventure!), but my very favorite moments came when they took a chance and added something risky and fresh to the gameplay, twisting the old classic gameplay with elements like running along decks of cards in the casino, or lighting fuses to blow away walls to advance in the Lost Labyrinth. I only wish Sega had the courage add a little more creativity to the stage themes, or at least a more substantial twist on an old theme. We’ve seen enough casinos for a little while. 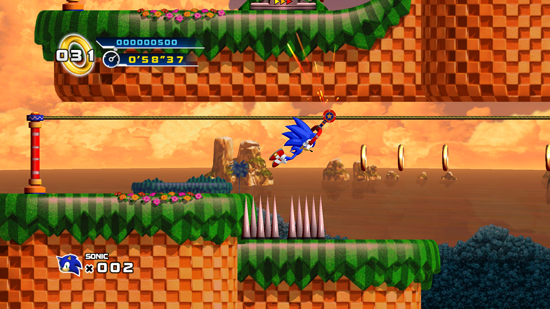 After all the drama that’s occurred within our Sonic-loving community over the past several months, I have to honestly say that I’ m embarrassed over the relentless controversy that smothered every tiny detail released about the game’s look, sound, and potential gameplay. The music is incredibly catchy, with an original tune not only for each zone as in the original games, but for each and every Act, giving that little extra bit of identity to each and every stage. The gameplay is fast and fluid despite what people assumed ironically because of one of the most controversial additions to the moveset – the homing attack. I’ll admit that I was definitely a little skeptical over the use of this new weapon at first. It seemed like a potential tool to cover up poor level design, sending you flying from enemy to enemy, letting the game decide your trajectory for you. While I did experience a bit of this in the beginning, I quickly discovered that this tool gave Sonic that extra bit of momentum, and really increased the fluidity of the gameplay significantly. By the end of the game, I was able to send Sonic in any direction, utilizing his homing move not as an attack, but as an air-based burst of speed akin to the spin dash. After finishing, I have a hard time imagining this game without it.

All-in-all, I am delighted to report that Sonic 4 is everything I was hoping for. While the visual style definitely needs a bit more polish (Sonic sometimes looks like he’s standing in front of a green screen, and Robotnik’s design is kind of bland), the accuracy of the homing attack could be tweaked a bit, and Sega could stray (JUST A BIT!) from the pastiche of old titles, this game is everything the classics were – fast, simple, surprisingly challenging at times and, most importantly, fun. Welcome back, old friend. 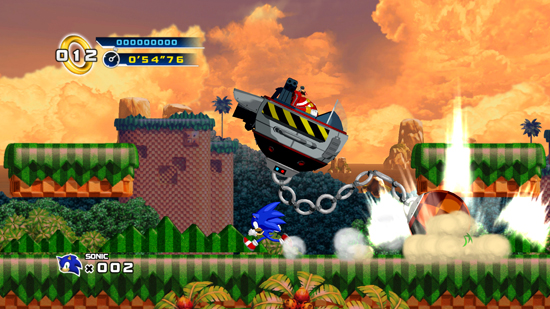 I went into Sonic 4 with some cautiously high expectations. Sure, it’s 2D Sonic, and short of putting in horribly deathtrappy levels, that’s hard to mess up really, but my faith in Sonic Team was still shaken after the abomination that was Sonic 2006, even after Unleashed somewhat reassured me that they’ve still sort of got it. Thankfully, though, I’m happy to say my expectations were met and surpassed in some ways.

The physics ARE different, and take a little getting used to, but after a couple levels, they feel great. Sonic might still be a bit stiff feeling, but aside from that, they’re nowhere near the world ending horror most fans have tried to claim them to be. Adding to that, the homing attack addition is a huge booster to the game. It’s much more of a helper than a hindrance. Levels are well put together, and the little gimmicks (cogs, cards, and torches especially) are great. And with so many alternate paths, I’m always learning something new, despite playing nearly every level several times. The game is also absolutely GORGEOUS. I wasn’t expecting something that looked so good from a downloadable title. Music is hit or miss, though. Some tracks (Especially Lost Labyrinth 2 and Splash Hill 1) are wonderful, but a couple (notably in Casino Street) are really lackluster, in my opinion. 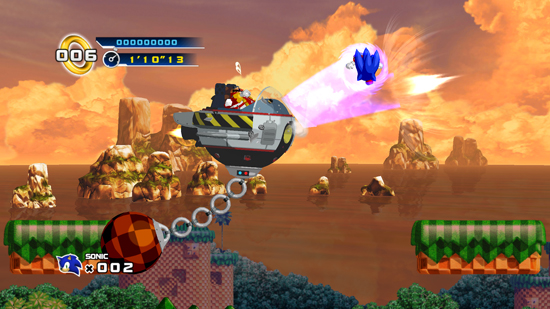 My only real issues are the lack of real explanations for some of the puzzles the first time around (they’re rather easy on repeat playthroughs), the special stages being ABSOLUTELY AWFUL, and the final boss level being rather cheap. A minor complaint goes to the reuse of old level environments instead of having original locales. But as mentioned on the podcast this is a re-introductory game and they do look damn good, so I can let it slide. As far as Episode 2: ORIGINAL LOCATIONS PLEASE.

The pluses EASILY outweigh the minuses, and I can honestly say I love this game to pieces. I’m very much looking forward to Episode 2.

The Simpsons Arcade Game is out now for XBLA, soon on PSN