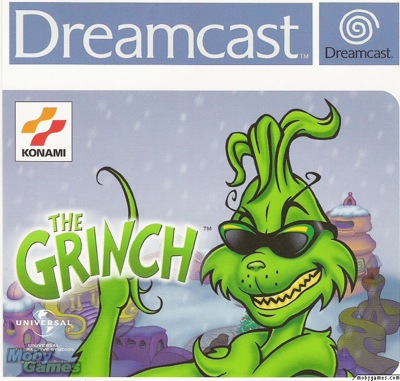 This week on the Sega Addicts podcast, the cool crew and Kris Knigge talked about Sega games that transitioned from 2D to 3D.  I’m guessing most of their comments aren’t going to be great.  One thing that made the transition fairly smoothly was The Grinch.  Jumping from a 2D book by Dr. Seuss into the Dreamcast game developed and published by Konami, is a fun little 3D platformer that you could get into just before the holidays.  What makes it so freaky? Well, it’s the Grinch and he’s a green monster and it’s all about being naughty.  When do you ever get to be a jerk in a game?  Well, a lot, but none of them are about classic children’s characters.  So hit the jump to get the jump on The Grinch (the Grinch jumps a lot, it’s a main attack of his, therefore a hilarious joke).

The Grinch is unbelievably naughty.  You get to throw rotten eggs in people windows, throw bees’ nests into cabins, deface posters and statues, hook peoples beds to motorboats, mix up the mail, replace the candles of a birthday cake with fireworks, and shoot kids in the face.  YOU GET TO SHOOT KIDS IN THE FACE AND THEN SMASH THEIR PRESENTS!!!!  The Grinch is so cool I might make him my new idol and tattoo his picture on my bicep.  My other favorite besides breaking kids’ gifts and noses via egg gun is wilting Christmas trees with bad breath.   The trees have a protector you have to knock out before you blow that stanky breath on the tree and when they recover to see their prized evergreen wither to a charred stick (that must be some bad breath!), they begin to cry the most hilarious stereotypical cartoon whimper ever.  I laughed every time and still smile to think about their tears.  (Geez, maybe I’m a bad person…) 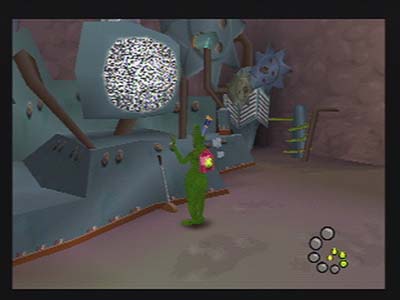 A lot of this game seems inspired by other 3D platformers of the era.  The worlds are open and seemingly highly influenced by Super Mario 64 in that they are non-linear and have a variety of tasks that need to be accomplished in the same area, collecting blueprints and smashing presents is very reminiscent of Donkey Kong 64, especially the presents.  Like how there were thousands of bananas to collect in Donkey Kong 64, there are 3,000 presents to smash in The Grinch.  At every turn there’s a damn gift.  One annoyance is that they all don’t smash the same way.  Some can be jumped on and broken, others need to be butt smashed (or as the game likes to call it, Pancaked), and some need to be smashed through with your rocket jump.  And no, the rocket jump isn’t like in Team Fortress 2, you have a rocket pack that fuels up via rotten eggs.  Rotten eggs fuel all your gadgets in fact.    These are plentiful the find, growing off stems everywhere, including inside a post office.  Come on Whoville, keep you state run building clean.  The economy must have meant severe layoffs to the cleaning staff.  Puzzles are fun and never too hard were you have to look up gamefaqs.  Lots of basic switch puzzles and some Resident Evil style puzzles like ring bells in the order you see on the painting.  There’s also sneaking bits where you have to hid in the shadows and seems like a simple and fun version of Sly Cooper.  I have no clue how the health meter works.   You get hit and it fills up sometimes?  It never was an issue.  And at any time you can take control of your pooch, Max.  He can fit through small areas as well as destroy presents.  Good dog. 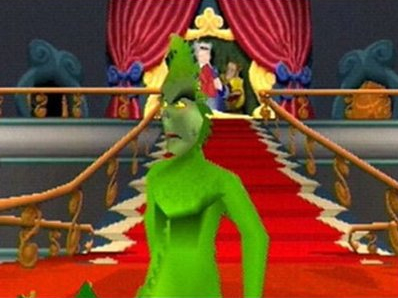 Graphics hold up pretty nicely. Textures and edges aren’t too rough and character movement is pretty smooth.  People who either love 2D games or current generation graphics may complain and The Grinch may not push the Dreamcast to the limit, but it’s serviceable and can get away with the limitations because of its whimsical nature.  The game’s sound is great, voiceovers and rhyming narration lead you through the game and the orchestral score by Pierre Roger could stand on its own and doesn’t get old.

If you want to act like your going get a lump of coal but still want those shiny new socks, The Grinch may be your ticket.  If your really really good this year and brush your teeth every day, maybe Alex Riggen will stuff one in your stocking this year.  Start emailing before Thanksgiving! 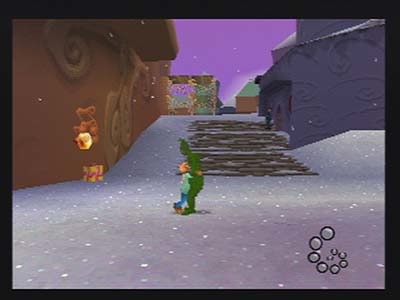