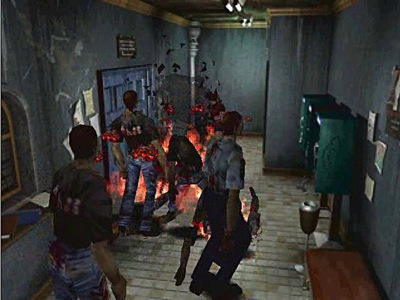 This is what the good weapons do.

Getting new guns just doesn’t feel good anymore.  With thousands of options in games like Borderlands and MAG, individual personality is lost to stats and numbers that don’t really mean much to me.  Maybe its because the targets are all the same now.  Grunts or online opponents can be taken down with anything, whatever tool will work.  Guns are now shoved in your face, and in a game like Halo, you’ll stick mostly with the stock Assault Riffle.  Playing Resident Evil 3 this week, picking up a new weapon was a reward, a thrill, an opportunity, a sigh of relief, and a warning to the stronger enemies ahead.  This week, I want to highlight some of my favorite weapons from the Resident Evil series, Dreamcast game only.  Hit the jump to check out my crème de la crème. 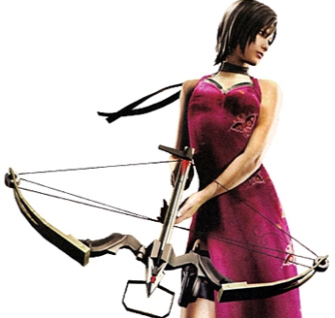 It isn't this cool unfortunately...

The Bow Gun and I have a love/hate relationship.  I hate it because the arrows take forever to kill anything.  You have to pump so many damn sticks into a zombie to take it down.  Of course, it’s the most common ammo in the game, so you’ll be using it a lot.  I’m almost sure it outnumbers handgun bullets.  However, those explosive arrows, those sweet sweet explosive arrows.  Something about shooting an incendiary bolt from a crossbow make you feel like a king.  “You think this is a regular arrow? Think again dead head!”  You’ll have to provide your own snappy quips to truly enjoy the Bow Gun. 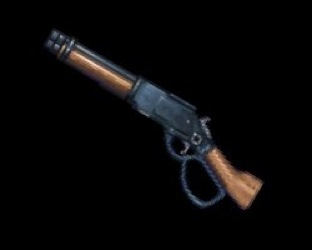 You feel good when you earn something after a hard day’s work.  What could be harder than defeating a nearly unstoppable monster several times?  When beaten, however briefly, Nemesis drops two parts that can be combined into the Western Custom.  Pump action?  Bump that jazz, it’s all about the lever baby!  Oh, you like your shotguns full length?  Get back to the nursing how Grandma because this baby has its barrel and stock sawed off!  I don’t know if I’d rather blast zombies or hold up a locomotive with this puppy and its quick firing rate.  Oh wait; I know exactly what I want to do.  Zombie ‘splodin time. 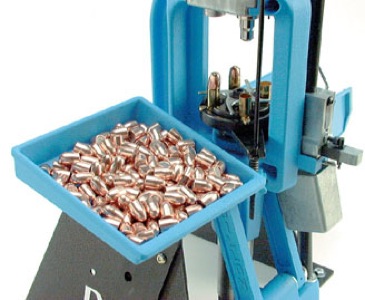 Imagine this in polygons

Not a weapon per se, but an important part of your guns’ balanced breakfast.  Simple crafting is always fun in games, and now Minecraft has proven you don’t need any other features to be an enjoyable game.  While it is easy to make regular ammo, the reloading tool is the best used to make the big bang shells you’ll need to take out the stronger enemies and bosses.  Save up that Gun Powder C, because you’re gonna need plenty of Magnum Shells.  Speaking of which…. 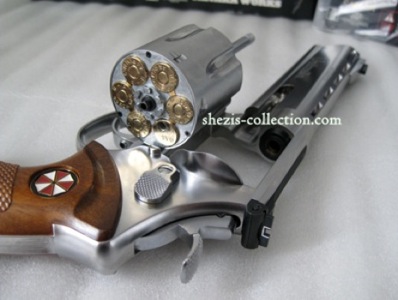 Believe it or not, this is an air soft gun. Crazy detail.

This big baby has more bang for its buck that we deserve to have.  Perfect for the boss fights, you better save the ammo because it is few and far between.  You know why Magnums are featured in every RE game?  Because they rule.  With better stopping power and range than a shotgun all in the palm of you hand, its not wonder Detective Harry Callahan chose the .45. 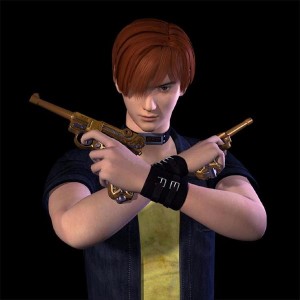 I honestly don’t remember if you can use these as a weapon yourself or not.  Just their aesthetic value makes them stick out to me.  And they make Steve look like a steeled gunslinger when he rescues Claire from the stretchy monster.  The fact you have to leave them in a door saddens me.  What a waste of craftsmanship and beauty. 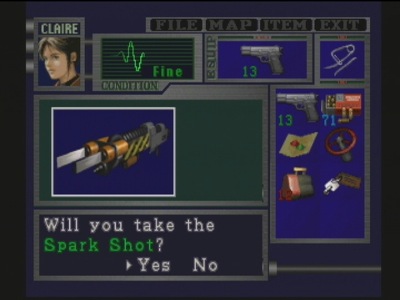 Resident Evil 2 introduced fully loaded weapons into the series.  Starting off at 100% ammo, you drain that number with every shot.  At first, you’ll feel as if you have all the shots in the world.  100% is the most percent you can have!  It will take forever to run low, right?  Though the flamethrower and the Ingram M-11 are useful, they can’t compare to the sheer lunacy of the Spark Shot.  It shoots sparks, hence the name.  It also looks like a giant wall plug with a couple of batteries attached.   Are there real electric guns that can shoot small and powerful bolts of electricity?  I hope not.  But I’m glad it is in RE2 because zapping a zombie one of life’s simple pleasures. 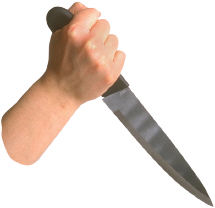 Once per each play through of any RE game, I find myself running low on ammo with only one measly zombie in my way.  Since my life motto is ‘Leave No Zombie Behind,’ I feel the need to end the zombie’s reign of shuffling terror.  I don’t want to waste bullets, so I’ll use my knife, which should work just fine.
WRONG!!!!!

Not only will it take forever and a half to kill anything with the knife, you’ll end up losing half your life in the process.  The knife in Resident Evil is a tease and collects dust up until they force you to cut spider webs off a door to justify it’s existence.

Any game weapon memories that have stuck with you?  Do you guys like the Spark Shot?  Do you ever use the knife?  Tell us about it in the comments what are the best and worst weapons you’ve experienced in a game.