I’m pretty sure I don’t need to review this. Just watch the video, and if you have a Wii you should know instantly that this must be downloaded right this moment. However in the spirit of the holidays and QUALITY JOURNALISM, enjoy this bite-sized review regardless, where the unbridled enthusiasm over a game meets the time constraints of the coming Christmas and something unlike any other RR before it is born.  This game is fantastic. Yes I could’ve done ‘fangtastic’, but this is no time for puns. Pack your bags Belmont as you’re off to fight the Count yet again. A century before Simon Belmont took up the whip, Christopher Belmont had a stab at it and the events of that particular episode of history is told in Castlevania – The Adventure Rebirth. I say ‘told’, but honestly absolutely nothing is said throughout the game, besides a few verbal jabs from Dracula himself. This isn’t metroidvania, this is some really old fashion whip-cracking action, where half the power-ups are useless and EVERY EXTEND means how many points you need to score an extra life.

This game is crazy. I could’ve said ‘bat-shit insane’, but that would be doing it a disservice. It’s designed to be played through in a single sitting, and although there is a cheat to carry on from the furthest part of the castle you’ve reached I wont share it. Why? Because the afternoon you spend playing this game will be the most happily nostalgic you’ll have had in quite a while. It keeps all the antiquated elements of the older titles, and removes all the frustrating parts. You can’t jump on/off stairs, but the waves of Medusa heads have a satisfying pattern to tip-toe between.

This game is brutal. You’ll die a lot, but you have an infinite number of continues so perseverance will eventually see you through any of the myriad of obstacles in the way, including teleportation mazes, candle lit caves that turn utterly dark as you smash each one out for points and power-ups and giant eyeballs that bounce back at you just as hard as you hit them. There’s also a room with more than twenty fire-breathing skulls pointing in your direction, and you can destroy them in a matter of seconds 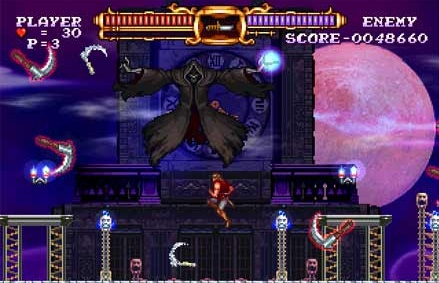 This game is incredibly simple. It could have an orchestral score, but it doesn’t. It could have unlockable weapons, levelling up mechanics, RPG elements and any number of extra features, but it doesn’t. It also doesn’t suffer for the decision, as at no point in the game do you ever feel weak. You always feel like you’re fighting tough enemies even if they die in 2-3 hits. Christopher Belmont doesn’t need to get upgraded to feel stronger, because throwing massive, detailed and enjoyable bosses in there to subsequently defeat is enough of a power trip already. Getting a +2 damage bonus is a confidence booster sure, but we just KILLED DEATH. We don’t need anything else. The soundtrack is so retro-chic that feels like you’re back playing Bloodlines or Super Castlevania IV again, but the game as a whole is designed to make you feel no only that you’ve done this dance time and time before, but that you’ve become bloody damn good at it.

Six levels, each with multiple paths, secrets to discover and more than enough bosses to satisfy any seasoned Belmont, including a perfectly paced final encounter with the multi-formed Dracula. I enjoyed Bloodlines, but it was incredibly hard. I love Symphony of the Night, but it’s much too easy. I like the music of Castlevania 2, but I prefer the purity of the first Castlevania. With The Adventure Rebirth.. I never once had the thought to compare it to any of the other games. It invites comparison, but truly it’s an amalgamation of all the best parts of the franchise. It identifies literally every element which it could do without, simplifying everything so exactly that as a complete package at the ridiculous price of £7/$10 it could be the finest Castlevania there is. That’s honestly all you need to know.

The Conduit being ported to Nvidia's Project Shield