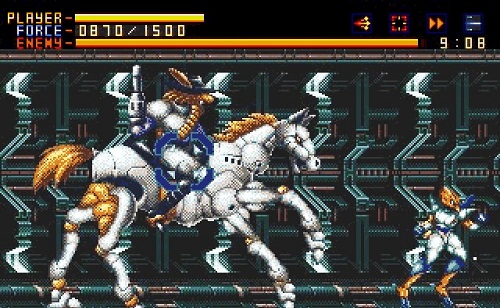 I only realised after the review of the 4th Genesis Collection that Alien Soldier doesn’t actually belong there. It was only ever released in Japan and Europe, so it was never -actually- released on a Sega Genesis, marking the PC port only the 2nd time it’s been available in the USA. Unless I’m wrong, which does happen. I also figured it deserved a little more exposition because of this fact, so here’s the more in-depth look at just what makes up an Alien Soldier;This is a dream of a game to review, because usually there’s an awful lot that you can’t talk about. In Alien Soldier there is absolutely nothing to spoil (besides yourself). It’s a side-scrolling action game with no discernible plot or elaborate scoring mechanic. You charge right, you fight hard, and you try to win.

At the start of the game you’re given a choice of six weapons, much like Gunstar Heroes, except this time you’re actually allowed to carry four of them at any time. You can also carry multiples of the same type, so if you’re a fan of the flame thrower or the lancer, you can have two of each. The other weapons are the sword (similar to the lance), a machine gun, a homing weapon (which again is fantastic) and spread fire weapon. Some of them are more useful than others, as the machine gun tends to be deflected an awful lot by the enemies and bosses you’ll encounter.

So what do you do with these weapons? You fight. A lot. The entire game is a boss-rush, with around 25 stages and even more bosses filling them up. Each stage is comprised of a short section as you dodge enemies, find weapons and heal up before the next boss fight. They’re all about 5 minutes long, with the majority of the time spent fighting the boss. The weapon pick-up stage is incredibly important, as similar to Vanquish collecting multiple weapons of the same type in the same slot increases the ammo capacity, and since ammo is extremely limited in this game and only replenishes this way or by switching to a new gun it’s a real necessity to plan accordingly.

You also have plenty of moves at your disposal outside of your unusual weaponry. By hitting down and A, you can switch between fixed aiming and movement aiming allowing you to either stand still and fire or keep firing in one direction as you’re firing backwards. Each is helpful in different situations, again similar to Gunstar, but letting you change at will means you’re never at a complete disadvantage so long as you’re thinking clearly. You can also use counter-force by double tapping B (the fire button), which converts projectiles into health pick-ups. Again, incredibly useful so that you don’t die all that often, but it’s also useful because at full-health you can use Zero Teleport, which causes a remarkably potent rush attack from one side of the screen to the other. With health any lower, it’s still an invaluable dodge manoeuvre to attack weak-points and dodge past heavy damage. Of course, you can also do regular jumps, as well as hover and attach to the ceiling, all as well tied to the jump button on C. There’s an awful lot of moves to get to grips with, and you’ll need each one of you want to survive. 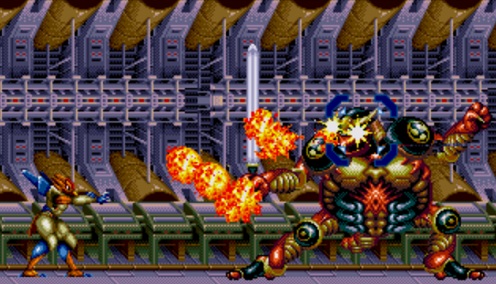 The one control complaint I have is that weapon switching is done by hitting A and then working through a wheel before you get to the right one. The game doesn’t pause for this however, and if not performed correctly you could find yourself in a world of hurt, and still not have the right weapon out. That aside it’s a really great system, and it allows for a lot of freedom of expression when it comes to the various encounters. For instance, you could try hovering at head-height so that you can pummel a weak-point with machine gun fire from a distance, or you could dodge past lethal attacks and unleash deadly fire power at close range, or you could defend to replenish your health until full and Zero Teleport your way to victory. The game fits around your specific play-style, and the game charts the time it took you to finish each time letting you see just how effective your attacks really are.

There’s actually a lot of transparency about the game that I really enjoy. You’re allowed to choose how your health/ammo/boss energy is displayed, so if you like it numerically or you want all the information hidden you can set it up every time you continue. The game also has a password system that’s only four digits long, and it lets you continue at the start of every stage anyway, which is a nice compromise between exciting, tense battles and frustrating trial-and-error gameplay. It tells you precisely how much damage you’re doing to enemies, and even shows you the resistance each part of the enemy has against the specific weapon you’re using. It also lets you live at a single hit-point every time you receive an otherwise mortal wound, so you don’t have to worry about being cruelly defeated by a cheap attack. Everything is out in the open, and I really appreciate the honesty of that kind of design.

The game is a real treat to look at as well, with incredibly large and vibrant sprites. The bosses are also especially great, as somehow each one is that great sort of multi-segmented encounter like Seven Force or the highway mech from Hard Corps. They’re great to watch, and their designs are really outrageous. Sometimes it’s just a bunch of teeth and eyes that you have to battle, others it’s a badass ninja cyborg wolf on a mechanical horse. I actually like the music quite a bit as well, as the gritty synthetic soundscape suits the intense and often frightening imagery you’re faced with. They suit the levels as well, which start off rather bland although suitably industrial, before you find yourself flying on a massive insect or battling a giant spider while caught on its web.

There’s an awful lot to like about this game, but I think it’s one of the toughest Treasure games to universally recommend. If you don’t like getting killed at least once every boss encounter, or you don’t like fumbling with a lot of different controls mapped to the same buttons you might find yourself getting frustrated. It also lacks any real narrative, and there’s absolutely no co-op play. That said, I think it’s a lot more enjoyable these days than it was when I was younger, with the modern day comparative of Sin and Punishment to go along with it. There are a lot of similarities between the two games, and if you were one of many who really enjoyed the side-scrolling stages from either S&P this is a great example of that sort of formula condensed solely into two dimensions. Even though S&P2 is much more accomplished in a lot of the same aspects as Alien Soldier, it still holds up incredibly well today, offering plenty of entirely original ideas and some genuinely exciting gameplay without the difficulty raising up those ‘HARD FOR THE SAKE OF HARD’ danger flags you get in a lot of action-intensive cult favourites. It’s a lot more smartly designed than it initially appears, and far more than its lacklustre reputation would have you believe.

Alien Soldier is a game as difficult as it is rewarding, riding a finely balanced line between player enjoyment, empowerment and the challenge of seemingly herculian obstacles. A