I love a good boss battle, me. Sometimes they can be epic, hard, or even drive in the core gameplay of the game into one condensed fight. What I’m saying is that boss fights are awesome and a company that always manages to have some really creative battles is Sega. So I have decided to replay many Sega games and focus specifically on the boss fights themselves, and what better game to start this on then Sonic the Hedgehog 2?

That’s right, Sonic 2 has some of the best and most creative fights in the whole franchise. It’s only right that I start this boss centric article by going through the best and worst bosses that this classic game has to offer. So hit the jump for some Sonic 2 boss fun!

The first boss of Sonic 2 is your standard first boss. He just rolls across the ground waiting to be hit so the game can move on. As you probably know it’s incredibly easy, but that isn’t why I brought him up in this article. No the reason why was because there is another boss who is even easier and more pathetic than the first boss. And that is the boss of Chemical Plant Zone.

So since Robotnik is every boss in this game you can assume that not all of his contraptions would be genius. Take the second boss for example, a machine which can spill a cup of blue liquid on Sonic it you give it enough time to do so. The sad thing about this boss is that the hardest part of the fight is the floor. The floor to the left and right of you will fall randomly, this is even more stupid as you don’t even need to stand on those parts of the floor to attack him. Exiting this boss to finish the level is harder than the actual boss itself. Now that’s pathetic. Oh and if you duck the blue liquid doesn’t even hurt you. Better luck next time Robotnik, try harder next time. 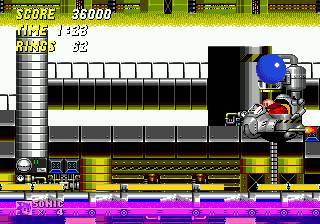 The other bosses of this game however are all varied and fun but I can’t help but think that Dr. Robotnik is over-thinking this whole ‘killing a hedgehog’ thing. It just seems rather silly to build a giant pinball machine when you could just fucking stomp him to death. I guess that wouldn’t make a fun boss though so whatever.

There is however one boss that sticks out in my mind out of weirdness. And that’s the boss of Metropolis Zone. In it, Robotnik spawns mini versions of himself that hatch out of eggs that fly around him whole he hovers above you. It’s a very absurd boss that doesn’t really come close to the way the other bosses worked. But I am trying to bring sense into a game which didn’t ask for it so I shall move on. 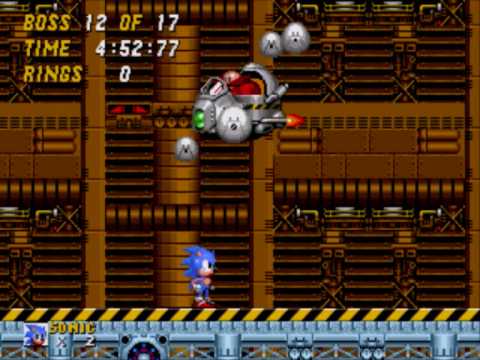 Yeah I don't know either.

Before I move on though I’ll just say that the boss theme in Sonic 2 is great and makes any boss seem better then they are. This is especially true in the final boss which is one of the best (and hardest) final bosses of a game ever. I’m not even joking.

Just let me set the scene. You’ve slugged through a bunch of zones and bosses and finally you’ve found yourself at the Death Egg, The final hurdle. ready to face Robotnik. Well not quite because first of all you have to beat Metal Sonic. Metal Sonic is a great, because he’s one of the only bosses in the early Sonic games to not be Robotnik his egg carrier or some variation of it. Also he turns into a saw blade which is fucking bad arse.

Anyway, after you’ve slugged your way through him as well you have to face Dr.Robotnik in a huge fucking mech. In this boss you only have a few times in which you can hit him without dying. And you’ll need to avoid even being hit once because the game doesn’t give you any rings in this stage. Yeah, if you get hit once it’s game over, bye bye hope you enjoyed failing kiddies. Honestly, this boss resonates with me so much because I could never beat him as a kid. Then my luck changed. I got better and finally, years later I beat him and Sonic 2. It was a signal. A call. I had ceased to be a child and become a man. But mostly I just jumped at the right time until he died.

So those were the best, worst and most memorable bosses of Sonic 2. If for some reason you’re reading this site and haven’t played it then you really need to question your position as a Sega fan. Not just for the awesome gameplay and levels, but the bosses which as I have showed you, can be creative, hard or just plain weird. Plus it’s always nice to see what Sonic bosses were like before every boss had to be Ultimate-Bio-Life-Form-Lizard V2.0