This is Ranger-X. You’ve never heard of it. You will watch that video, and then you will ask yourself the very same question I did; ‘Why did nobody ever tell me about this game?!‘

Ranger-X is a run-and-gun style shooter released in 1993 on the Mega Drive in all territories, developed by Gau Entertainment. A quick search on the name apparently leads back to Nextech, who were the developers of Resident Evil: Code Veronica on the Dreamcast, now simply known as Nex Entertainment and were responsible for the PS3 port of Bayonetta. It’s comparable to Assault Suits Valken on the SNES (Cybernator if you were unfortunate enough to get the slightly bastardised version), although with a much faster pace.

Okay, bored of that stilted format already. Lets fire into the fun stuff. You play Ranger-X, tasked with saving everyone I guess from a massive robot army that seems to have attacked. Ranger-X is the pilot of a massive exo-skeleton with a machine gun and jetpack, which can be flown around with the D-pad. This happily leaves firing up to every single other button on the three-button controller, with A and C firing in either left or right directions, so you can switch your targets without worrying about it changing your flight path. B is used for firing a special weapon, which is charged up by Solar Energy. While you’re out in the sun, it recharges automatically, but if you find yourself in the dark you’ll need to conserve your ammo.

You’re not alone either, as you have on each of the six levels in the game an EX-UP, which is a kind of assistant mech. For the first two stages it’s a unicycle which fires independently from you, and can be surfed to keep you safe from ground hazards, and docked into for extra speed and to switch your special weapon. You’ll find one hidden on all but the first and final stages, so be on the look out as each is incredibly useful in the right situation. If you have a six-button controller you can even operate the EX-UP with X and Z to move it left and right, great for separating groups of land enemies. The other EX-UP is a slow-moving airship, which simply follows you where-ever you go, firing deadly lasers at any enemy foolish enough to approach it.

You can also dock with the airship to change weapon, but it can’t be moved like the unicycle. The special weapons take the form of a flame-thrower, a grenade launcher, homing lasers, a mechanical bird (which is amazing), a plasma blaster (think of a flamethrower that’s much less picky about the direction it shoots in) and a bloody great cannon that uses your entire power-bar to fire a single round. All are super good at killing, and offer a real challenge at picking your favourite, although of course only being able to use them on or after the stage they appear is a little disappointing. 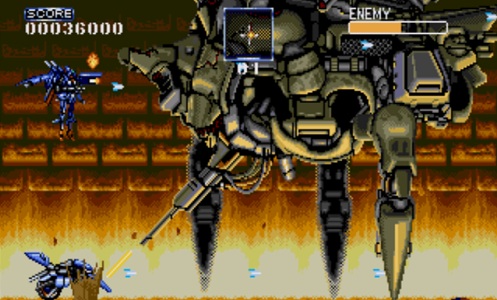 Each of the stages offer a lot of variety. The first is a fairly typical ‘blow everything up to the right of you’ affair, but the second stage shoves you straight into a dark cave, where you need to blow open sections of the ceiling in order to find the sunlight that will recharge your weapons while avoiding various death traps and hunting down hidden generators. Then you’re off into a jungle, where it’s sunny above the tree-line but shaded beneath it, ensuring you balance out your attack strategy. What’s really cool about this stage is that it does actually become brighter and darker depending on where you are, simulating a kind of very lo-fi HDR lighting effect.

This also seems the point to mention what you’ve probably been thinking since you saw the video above. This game is gorgeous. I have absolutely no idea how they managed it, as typically the Mega Drive has had to make some concessions when it came to trying to match the fidelity of the SNES, but Ranger-X charges against the entire library head-on. Everything is incredibly detailed, with some great looking effects on the jet-pack and in the environment, and the transforming aspects of the Ranger-X suit and its EX-UPS are surprisingly sophisticated.

Not only that, the game is almost never hampered by slow-down, with significant amounts of enemies and gunfire on the screen, even while you’re firing a machine gun and a flamethrower surfing on top of a unicycle. Which is also firing a machine gun. That’s not even a part of the game I’m most impressed with, as there’s one particular effect in during a boss sequence in a hanger that I never expected to see from my Mega Drive. (It’s at 8:30 on this video, which should play automatically at that time anyway, but I don’t have that kind of confidence in myself)

The sound design is effectively catchy, retaining that technological vibe while slightly twisting around to fit either the city-scape or desert environment you’re currently fighting in. I’d argue the game is maybe a tad too easy. You’re given three continues from the start, and you get a new one every 200,000 points, which means some players who’re used to intense side-scrolling action games might even see themselves finishing the game on their first play-through, but there is always a hard-mode for those who really want a challenge.

Overall though it’s an incredibly well put-together action game, slightly losing out to other titles in the genre due to a lack of co-operative play, compelling scoring mechanics and it’s over all too quickly. It is however a testament not to what the Mega Drive was capable of, but what I never thought it could ever achieve. Maybe I’m exaggerating it a little, but while I’ve loved the design of other games on the system, I can’t honestly say I can think of another game that has looked this good in my entire time owning one.

A rich, rewarding and varied run-gun-fly-surf-unicycle shooter that somehow isn’t Vectorman. A-